The traditional feature at Belmont Park on Memorial Day is the $750,000 Metropolitan Handicap (G1), a 1 mile trip around 1 turn for older horses. A field of 9 went to post in the 120th renewal of the "Met Mile" before 11,664 fans enjoying clear skies and temperatures in the low 70's. Flat Out was sent off as the 5-2 favorite off his win in the Westchester Handicap (G3) at Belmont. In to challenge him included 3-1 second choice Cross Traffic, who finished second behind Flat Out in the Westchester, and 9-2 third choice Sahara Sky, second in the Carter Handicap (G1) at Aqueduct after winning the Palos Verdes (G2) and San Carlos (G2) at Santa Anita.

Jockey John Velazquez sent Cross Traffic to the lead exiting the chute and he set fractions of 22.40, 44.88, and 1:09.20 over the fast track while stalked by 35-1 longest shot Handsome Mike. Cross Traffic continued to lead by as many as 1 1/2 lengths at the 1/8 pole, but Sahara Sky, who was last for the first 5/8 mile, unleashed a strong rally down the center of the track to nail the pacesetter at the line by a nose, completing the distance in 1:34.17. It was another 3 1/2 lengths back to favorite Flat Out third. 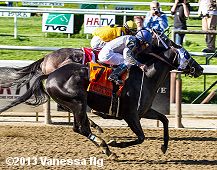 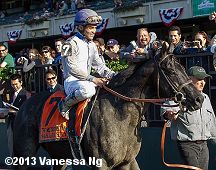 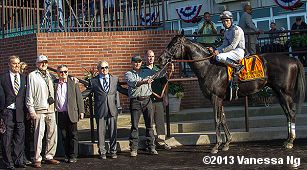 Left: Sahara Sky takes his walk down Victory Lane. Winning trainer and co-owner Jerry Hollendorfer said, "(Co-owner Kim Lloyd) and I talked it over, and one of our goals was to win the Metropolitan Mile. I'd never won it, and I wanted a chance to win it, and Kim did, also. We had a little added confidence because we thought our horse ran good in New York over at Aqueduct, and with a little bit better trip we might have even won that race. I told Joel to watch his pace. We knew there was some speed to set that up, and I told him the horse likes left-handed whipping, so I told to hit both left- and right-handed, and he came running and got up the last jump." 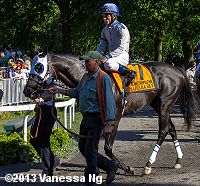 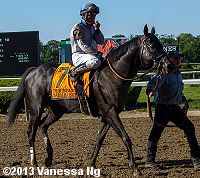 Left: Sahara Sky in the paddock before the race. Winning trainer Jerry Hollendorfer added, "I'll take him back to California and give him a good, long time between races like we do, and we'll make a new decision on where to go. We give him a lot of time between races, and he rewards us every time. The way he ran today, it looks like he could get off a little more ground. I'll watch the films and watch the gallop out and see what I think about that, but it might be a possibility to look at longer races. I don't want to keep flying him across the country, though."

Right: Sahara Sky circles after the race. Winning jockey Joel Rosario said, "I was thinking I won, but it was so close and I was so far to the outside, sometimes it's hard to tell. I thought we had a head in front, but the angle was different and I didn't know. Jerry always gave me opportunities. In California, when I was doing good, he gave me a lot of opportunities on his horses, and I appreciate that. He's the kind of horse that makes one little, late run. If you push him a little early, he kind of stays there, but when he's like that, far back, he'll give it to you. I think he ran a very good race today." 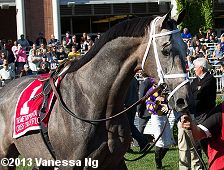 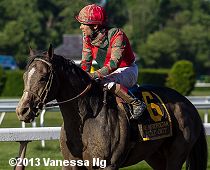 Left: Second place finisher Cross Traffic in the paddock before the race. Jockey John Velazquez said, "He ran good and got nailed at the wire. There's not much else to say." Trainer Todd Pletcher added, "He ran a great race."

Right: Third place finisher and beaten favorite Flat Out returns after the race. Trainer Bill Mott said, "He got bounced pretty good at the 5/16 pole, no doubt about it. I think he had a pretty good head of steam going and a horse came over and it looked like he went boom, this way, and boom, that way; he was bouncing back and forth a couple of times. Junior (Alvarado) said it cost him a lot of momentum. It's pretty hard for me to fault Junior, at that time it looked like the path of least resistance, until he got there. Just when he got there, it looked like the other horse dropped in. But, he put in a good effort."

Kicking off the Memorial Day stakes action, a field of 6 three-year-old fillies went 1 1/16 miles on the inner turf in the $200,000 Sands Point Stakes (G2). Watsdachances was sent off as the 2-1 favorite of a fourth place finish in the Appalachian (G3) at Keeneland, over 5-2 second choice Discreet Marq, second in the Sweetest Chant at Gulfstream Park, and 3-1 third choice Unbelievable Dream, winner of the Appalachian (G3).

Jockey Jose Lezcano sent Discreet Marq to the lead immediately and she set easy fractions of 25.57, 49.84, and 1:13.46 over the firm course, while stalked by Watsdachances and 16-1 Kitten's Queen. Entering the lane, Discreet Marq opened up a 1 1/2 length advantage through a mile in 1:36.57. 9-2 fourth choice Wave Theory, fourth early, attempted to close but Discreet Marq easily held her off by 3/4 length in 1:42.50. It was another 1 1/4 length back to favorite Watsdachances third. 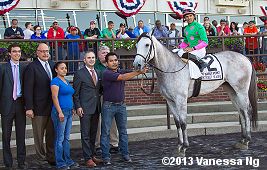 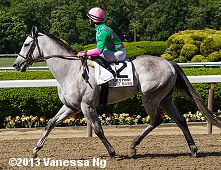 Left: Discreet Marq in the winner's circle. Winning trainer Christophe Clement said, "I'm a very lucky man. She came to me at Payson Park 2 1/2 months ago. She's trained very well from Day 1. It's a bit ambitious to be here, but she was the only speed of the race and (owner Patricia Generazio) was really happy to take the shot. It worked out. She's a nice horse; she was a nice horse last year. She's a top-class filly, I'm sure of it. We have many races on the turf coming along, so it's going to be fun. Let's enjoy it for today, and go from there."

Right: Discreet Marq returns after the race. Jockey Jose Lezcano said, "That was the plan, not too much to say. She broke good and was in the front. I waited for the final 3/16 to make a run, and she pulled out a win." 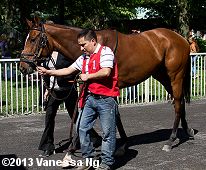 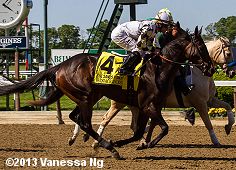 Left: Second place finisher Wave Theory in the paddock before the race. The 9-2 fourth choice raced fourth 2 1/2 lengths off the pace under John Velazquez, rallied in the lane but just missed. The Chad Brown trainee improved her record to 1 win, 3 seconds, and 1 third in 8 starts, earning $153,434 for owner Martin Schwartz.

On to the Ogden Phipps Handicap and Acorn Stakes also on the card.