The $400,000 Ogden Phipps Handicap (G1) features some of the best older fillies and mares of the east coast going 1 1/16 miles around one turn at Belmont Park. Defending champion Awesome Maria was sent off as the 3-4 favorite in the short field of 5, off a 5-race win streak including the Rampart (G3) last out. In to challenge her included 2-1 second choice It's Tricky, winner of both the Top Flight (G2) and Distaff (G2) Handicaps, and 6-1 third choice Cash for Clunkers, winner of three straight including the Heatherten. 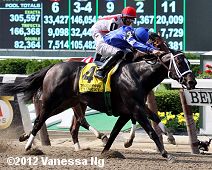 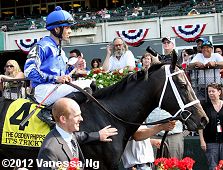 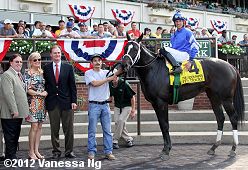 Left: It's Tricky takes her walk down Victory Lane. Winning jockey Eddie Castro said, "I put her right there, gave her a shot, and in the stretch she had to make her run. That's her. The plan (was to focus on) Awesome Maria. But when you're in the gate, it's different. You break from the gate, and it changes. You have a decision. Awesome Maria didn't break, and I put (It's Tricky) right there."

Right: It's Tricky in the winner's circle with trainer Kiaran McLaughlin on the far left. McLaughlin said, "She's a special filly. Eddie rode her very well. (Cash for Clunkers) was tough, wow! We just did get there. From the 3/16 pole to the 1/8 pole, I was worried – she wasn't there yet. She ran great. We're not sure what's next for her." 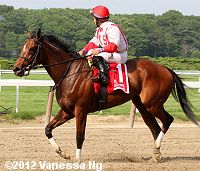 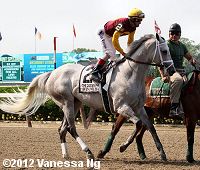 Left: Second place finisher Cash for Clunkers returns after the race. Trainer Rick Violette said, "She was pressed from the middle of the turn. Eddie (Castro on It's Tricky) rode a terrific race. I thought he would be more worried about Awesome Maria and maybe leave us alone a bit longer. We had to start running on the middle of the turn and it was a long, hard drive. For a filly that hasn't really been pressed to the wire, she just really ran her eyeballs out. I am really, really proud of her. We found out today that she is a real filly."

Right: Third place finisher and beaten favorite Awesome Maria in the post parade. Trainer Todd Pletcher said, "I thought she ran pretty well. I think I did a really poor job preparing her for this race. We stayed in Florida too long, got rained on a lot, missed a couple of works down there. Then I tried to make up for it here and breezed her on a sloppy track.  I really did a bad job preparing her for this race. It wasn't her fault. I'll take the blame for it. We'll go to Saratoga."

The $300,000 Acorn Stakes (G1) featured a field of six 3-year-old fillies going 1 mile around one turn of the main track. Contested was sent off as the even-money favorite off three straight wins including the Eight Belles (G3) at Churchill last out. In to challenge her included 3-1 second choice On Fire Baby, off a fifth place finish in the Kentucky Oaks (G1), and 4-1 third choice Zo Impressive, second in the Gulfstream Park Oaks (G2) last out.

Jockey Javier Castellano sent favored Contested to a clear lead exiting the chute and she set quick fractions of 22.64, 45.19, and 1:09.32 over the fast track while as many as 4 lengths in front of 9-2 Aubby K stalking her in second. Entering the lane, Contested continued to lead by 4 lengths. Zo Impressive rallied from 4th but was no match for Contested who cruised past the post 5 lengths in front in a time of 1:34.61. It was another 1 1/4 lengths back to Aubby K third. 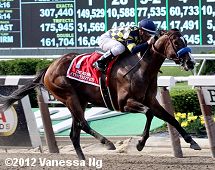 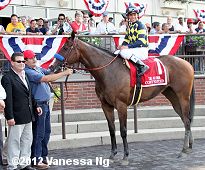 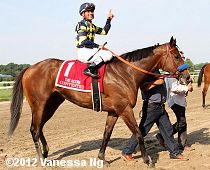 Left: Contested in the winner's circle. Jim Barnes, assistant to winning trainer Bob Baffert said, "It was very exciting. That's just what we wanted to see. You've got to play the break, it all depends on how you break. She basically caught a flyer, and they stayed off of her. She went :22 and :45, so they didn't just give it to her. She was rolling right along. Javier said she reminded him of (her sire) Ghostzapper."

Right: Contested returns after the race. Jockey Javier Castellano said, "She is really an amazing filly. I hadn't ridden her before, only watched the replays a couple of times. What she does, she does so easily. I just wanted to sit still and not move until it was the right time, and the right place. She enjoyed the trip and just galloped." 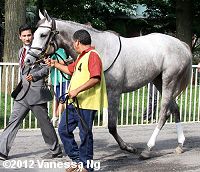 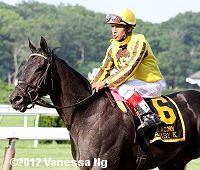 Left: Second place finisher Zo Impressive in the paddock before the race. Jockey Rajiv Maragh said, "I didn't want to challenge Contested too early. I wanted to time my move right, and approaching the 1/4 pole I made my move and my filly gave me all she's got. She tried really hard, but unfortunately she couldn't get there today. It was nothing to be disgraced about. It was a really good effort."

On to the Met Mile and Sands Point Stakes also on the card.