The traditional feature at Belmont Park on Memorial Day is the $750,000 Metropolitan Handicap (G1), a 1 mile trip around 1 turn for older horses. A short field of 6 contested the 119th renewal of the "Met Mile", before 10,577 fans enjoying clear skies and temperatures in the high 80's. To Honor and Serve was sent off as the 8-5 favorite off his wins in the Cigar Mile (G1) and the Westchester (G3). In to challenge him included 2-1 second choice Caleb's Posse, second in his last 2 starts, the Tom Fool (G3) and the Carter (G1), and 3-1 third choice Shackleford, winner of the Churchill Downs Stakes (G1) last out.

Jockey John Velazquez sent Shackleford to the lead exiting the chute and he set quick fractions of 22.77, 44.73, and 1:08.52 over the fast track while pressed by To Honor and Serve to his inside. Shackleford opened up a 2 length lead at the 1/8 pole, but Caleb's Posse, last for the first 3/4 mile, closed with a rush on the outside. Shackleford held him off in the final strides to get the win by a nose in 1:33.30. It was another 2 lengths back to favorite To Honor and Serve third.

The Metropolitan Handicap is the first Breeders' Cup Challenge "Win and You're In" race in North America this year. Shackleford is guaranteed a berth in the Breeders' Cup Dirt Mile (G1). He will have his pre-entry and entry fees waived, and will receive a $10,000 travel allowance. Winning trainer Dale Romans said, "He flies back (to Kentucky) in the morning. We have no idea what we're going to do next. This was the goal from the beginning of the year, and we made it here and we'll regroup and figure out what to do to get to the Breeders' Cup." 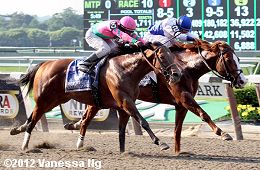 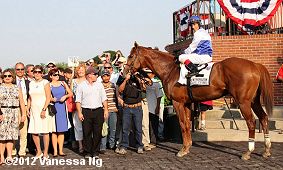 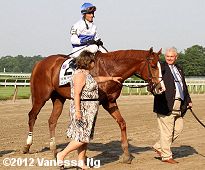 Left: Shackleford in the winner's circle. Trainer Dale Romans said, "I knew he was going to finish. It was just a matter of whether they could get by him or not. He's gutsy as they come. Hopefully, he'll get the credit he deserves. He's a spectacular horse. I thought coming off the turn he was going to be tough to get by. When they hit the wire, I thought he won. Ten jumps out, I didn't know whether [Caleb's Posse's] momentum was going to carry him on by us, but when he hit the wire I thought we won."

Right: Shackleford heads to the winner's circle. Jockey John Velazquez said, "I saw the shadow (of Caleb's Posse) coming so I had to go real far out to get him. I was wondering if somebody was in between and was thinking if nobody was there I was going to go straight out, and that's what made me win, because when I came out, he put up a fight. He dug back in big time." 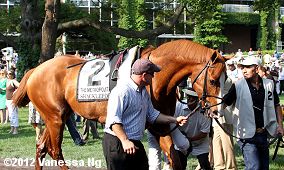 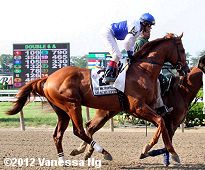 Left: Shackleford in the paddock. Trainer Dale Romans said, "These two have had a good rivalry. It's their fourth time against each other, and they're 2-2. Caleb's Posse is a great horse, and it's a good rivalry. Let's see each other again. It was the race of the year, and it's exciting to have been part of it, win, lose, or draw, with all of those good horses. And it lived up to its billing. To be a nose apart at the wire, I think it lived up to the hype." 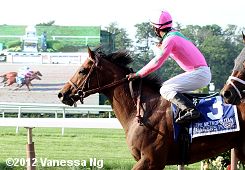 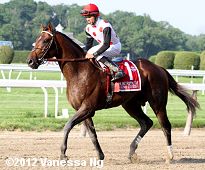 Left: Second place finisher Caleb's Posse returns after the races as his jockey watches the replay of the photo finish. Trainer Donnie Von Hemel said, "We'll get over this (losing three straight by a neck, a nose and a nose). For him to overcome the track bias and run like that, we're very proud of him." Jockey Rajiv Maragh added, "It's real unfortunate to lose a race like this by such a short margin as good as he ran. The track has been fast all day, and it seemed like there was a speed bias. I was just trying to do my thing with my horse and make my move. He did his run.  It was an unfortunate loss but a valiant effort."

Right: Third place finisher and beaten favorite To Honor and Serve returns after the race. Trainer Bill Mott said, "I don't think the inside post helped us, that's all." Jockey Jose Lezcano added, "He ran very good. (Shackleford) went to the lead, and Jackson Bend was right there so I had to wait, but he gave me a good race."

Kicking off the Memorial Day stakes action, a field of 8 three-year-old fillies went 1 1/16 miles on the inner turf in the $200,000 Sands Point Stakes (G2). Somali Lemonade was sent off as the 4-5 favorite off her second place finish in the Appalachian (G3) at Keeneland. In to challenge her included 7-2 second choice Regalo Mia, third in the Appalachian (G3), and 11-2 third choice Firehouse Red, second in the Edgewood last out.

9-1 Preach Tome Daddy went to the lead immediately and set slow fractions of 25.80, 49.74, and 1:13.29 over the firm turf, while stalked by 24-1 Zultanite and 8-1 Better Lucky. Turning for home, Preach Tome Daddy tired allowing Zultanite to inherit the lead, getting 1 mile in 1:36.66, but Better Lucky and late-running Regalo Mia were quickly closing on her. The three hit the linet ogether, as Better Lucky nosed out Regalo Mio for the win in 1:42.75. It was another neck back to Zultanite third. 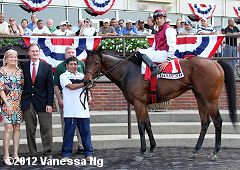 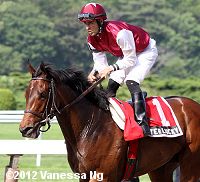 Left: Better Lucky in the winner's circle. Winning trainer Tom Albertrani said, "I was a little concerned, I thought she'd be on the lead easy. It looked like we were getting a little bit outrun, but Eddie did a great job, just rode with patience and found a seam to get through. The last jump was pretty tight, I said 'I'll settle for a dead heat here!' From past experience, I've seen horses run well in the mud (and then run well on the grass). It's kind of a different angle, you're not always certain it will work, but sometimes it does. It certainly did today."

Right: Better Lucky returns after the race. Jockey Eddie Castro said, "I saved ground all the way. I got a nice position behind (Preach Tome Daddy). Coming into the stretch I moved to the outside and she gave me all that she had. She tried really hard and held for the photo finish." 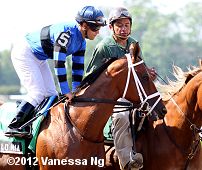 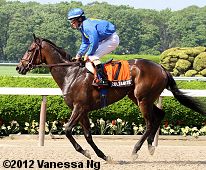 Right: Third place finisher Zultanite returns after the race. The 24-1 shot pressed the pace under jockey Ramon Dominguez, gained a short lead midstretch but had to settle for third beaten a neck. The David Donk trainee improved her record to 1 win, 1 second, and 2 thirds in 7 starts, earning $77,250 for owners William Punk Jr. and Philip DiLeo.

On to the Ogden Phipps Handicap and Acorn Stakes also on the card.