The feature race at Del Mar on Saturday was the $200,000 Pat O'Brien Stakes (G2) for older horses sprinting 7 furlongs on the main track and is a Breeders' Cup Challenge "Win and You're In" qualifier for the Dirt Mile. Conditions were excellent with sunny skies and temperatures in the mid 80's. After 4 scratches (including Bing Crosby (G1) winner Ransom the Moon), just 4 went to post with Catalina Cruiser sent off as the 1-5 favorite, undefeated in 3 career starts including the San Diego Handicap (G2) last out. In to challenge him were 5-2 second choice Battle of Midway, unraced since winning the Breeders' Cup Dirt Mile (G1), 14-1 third choice Threefiveindia, 7th in the Tom Fool Handicap (G3) at Aqueduct, and 19-1 longest shot Vorticity, 4th in the Coalition at Laurel.

Threefiveindia was quickest out of the chute through an opening quarter in 22.23 before Catalina Cruiser took over through a half in 44.82. Entering the stretch, Catalina Cruiser began to pull away from the field, opening up by 3 1/2 lengths midstretch through 3/4 in 1:09.37. Kept to task by jockey Drayden Van Dyke, Catalina Cruiser drew off late to win by 7 1/4 lengths over Battle of Midway in 1:22.13. It was another 2 1/4 back to Vorticity third, and 5 3/4 more to Threefiveindia last. 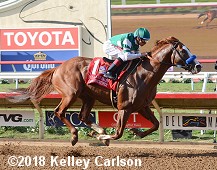 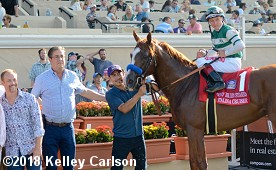 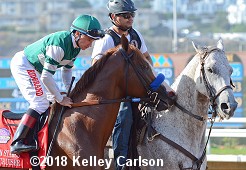 Left: Catalina Cruiser in the winner's circle. Winning trainer John Sadler said, "Right now the plan is to run Catalina Cruiser in the (Breeders' Cup) Dirt Mile and Accelerate in the Classic. And hopefully, in January this horse in the Pegasus. He'll be a little more seasoned and mature by then. They chose to press him early today, they figured that was their best chance, but he looked good turning for home and you know he's going to finish because he's such a nice horse. "

Right: Catalina Cruiser in the post parade. Winning jockey Drayden Van Dyke said, "He's something. He came away from there well and he was rolling by the second jump. Once he gets going, he's a little hard to stop. As big as he is and as long as he strides, he's got good balance to him. He's professional. He goes about his business well. I knew what was going on out there today; I knew where I was with him and who he was running against. He is something. I said he was one of the best horses I've ever been on. He just might be the best. He's a cruiser, for sure." 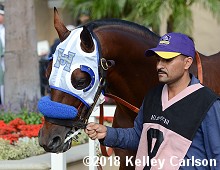 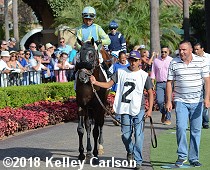 Tatters to Riches in the winner's circle. Winning trainer Jeff Mullins said, "He's a big, long-striding horse and we always knew that sprinting wasn't going to be his game and two turns would be better for him. But we were excited about this race. I wish we would have had more time (between races) but it didn't work out that way. It's a feeling of accomplishment and relief both. A horse coming off that long a layoff and running twice in 23 days is a little worrisome. But hopefully he comes out of it OK and we can map out his next spot."