The feature race on Saturday at Parx Racing near Philadelphia was the $1 million Pennsylvania Derby (G1) for 3-year-olds going 1 1/8 miles on the main track. Conditions were excellent, with sunny skies and temperatures in the high 60's, with the main track fast and the turf firm. As expected Santa Anita Derby (G1) winner Taiba was sent off as the 7-5 favorite in the field of 11 off his close second in the Haskell Stakes (G1) after finishing 12th in the Kentucky Derby (G1). In to challenge him included 3-1 second choice Zandon, third in the Travers (G1) and Kentucky Derby (G1) but second in the Jim Dandy (G2), and 4-1 third choice Cyberknife, second in the Travers are winning the Matt Winn (G3) and Haskell.

Also on the card was the Cotillion Stakes (G1) won by Society plus the Parx Dirt Mile, Greenwood Cup, Imply, Prince Lucky, and Plum Pretty Stakes. 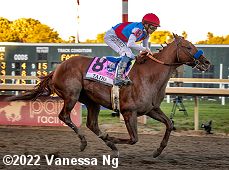 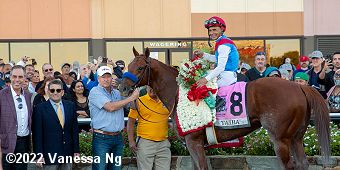 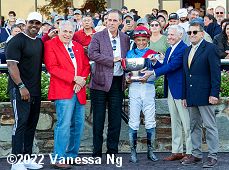 Left: Taiba in the winner's circle. Gary Young, bloodstock agent for winning owner Amr Zedan said, "We thought an effort like this was going to be what we got. He was much more comfortable down inside horses today than he was in the Haskell. Once he got him outside coming to the top of the stretch the race was over. He has a really good turn of foot, he was good in the paddock, good in the post parade, kind of what we expected. we always said that this horse has a lot of room for improvement and we think next year he will be even better than he is next year and he is pretty damn good this year."

Right: The trophy presentation for the Pennsylvania Derby. Baffert said, "That was exciting. He did it. He ran his race. He is getting better and better. He is a horse that has been slowly improving. He had a little bit of a rough trip in the Haskell, but we had some time to get him ready for this one. He proved today he is a good horse. It was the last chance to run a Grade 1 against 3-year-olds and it was a tough race, a good field. The main thing is that he ran his race. I was a little worried when he was down on the inside because he doesn't like being on the inside. When he tipped to the outside, he just took off." 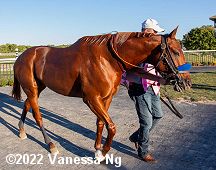 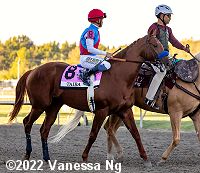 Left: Taiba in the paddock. Winning jockey Mike Smith said, "He has a turn of foot on the dirt that's like a great grass horse, which is very unusual. He's learning to rate. Now that he'll take dirt in his face, he's going to be even more dangerous. He was just getting used to the dirt early on when he was young; you can just let him settle now."

Right: Taiba in the post parade. Baffert added, "You want to be the best 3-year-old. This was the spot that puts him right there. He is just a tough horse. He is powerful. He is a heavily muscled horse and you would not think he would run this far. He has speed but he will sit behind horses. He comes running and he is just a fighter. Gun Runner is an unbelievable sire and this guy looks more like Gun Runner than a lot of them. I was just so excited watching it. I was not loving it on the backside, but once he tipped out it was like, 'wow! Look at this guy!'" 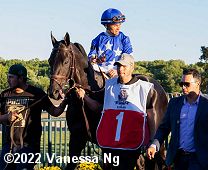 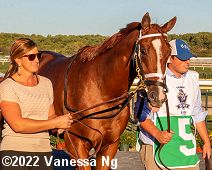 Right: Third place finisher Cyberknife entering the paddock. Jockey Florent Geroux said, "I didn't like the way he was traveling, it was not like him to be farther back and putting his head in the air and kind of climbing. He made a nice middle move down the backside. I was able to creep up and be right behind Taiba turning for home, but after that when Taiba rebroke, [Cyberknife] was unable to sustain his move." Trainer Brad Cox added, "It's possible (to go in the Dirt Mile). We'll look at that. That might be better option (versus the Classic). But we'll let the dust settle and see what everyone else is doing, see how he comes out of it and go from there. You never know." 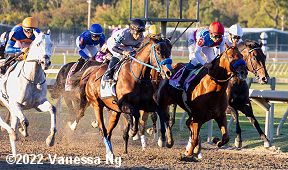 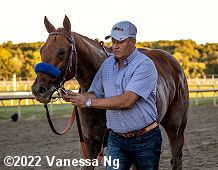 Left: First time by in the Pennsylvania Derby. Jockey Paco Lopez aboard fourth place finisher Simplification (post 9) said, "We couldn't hold show and ran fourth, but my horse was very good. He was running in second early. He was running very well. I wasn't really where I wanted to be. I kind of wanted to be maybe third or fourth, but I really didn't have any choice. I had a bunch of horses to my inside, and I couldn't hold them. He tried hard, no excuse, but I think the other horses had the best of him."

Right: Taiba heads back to the barn after the race.

The $300,000 Gallant Bob Stakes (G2) featured a field of 13 three-year-olds (after 1 scratch) sprinting 6 furlongs on the main track. Woody Stephens Stakes (G3) third place finisher Provocateur was sent off as the 3-1 favorite off his win in the Jersey Shore Stakes. In to challenge him included 7-2 second choice Runninsonofagun, third in the Amsterdam (G2) and Allen Jerkens Memorial (G1), and 6-1 third choice Of a Revolution, second in the Robert Hilton Memorial.

Jockey Albin Jimenez sent 45-1 Speaking to the lead out of the chute through fractions of 21.97 and 45.03 while pressed by 27-1 Little Vic and stalked by 11-1 Lightening Larry. Turning for home, 9-1 Scaramouche, 4th early under John Velazquez, came out wide and swept to the front through 5f in 57.71. 6-1 fourth choice Of a Revolution put in a strong late rally from 10th but Scaramouche held him off to win by 1/2 a length in 1:10.38. It was another 2 lengths back to Runninsonofagun third, while favorite Provocateur failed to rally and finished 8th beaten 6 1/2 lengths. 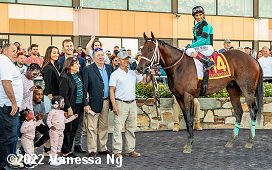 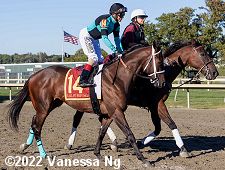 Left: Scaramouche in the winner's circle. Winning owner Nicholas Cammarano Jr. said, "It's my first graded stakes win, so I've got to swallow it all. This is going to sink in eventually, but it's just awesome. (Trainer Guadelupe Preciado) did such a great job with the horse, and the whole team we got has been really doing good. We were worried about being in the 14-post, but we had a good rider and he ran on."

Right: Scaramouche in the post parade. Winning jockey John Velazquez said, "That was very good. That was a nice pick-up mount. The position that we had after he broke good it was enough and we waited to get a little more position. As soon as we got to the turn, we were three or four wide. I was coming through and I thought hopefully I could save a little ground and save a little horse and he'd have something down the lane, and he did. The 14 position, really all you can do is try and get a position and not lose too much ground, and then try to save a little bit."

The $300,000 Turf Monster Stakes (G3) featured a field of 11 older horses sprinting 5 furlongs on the turf. Fishtown Stakes third place finisher Uncle Ernie was sent off as the 2-1 favorite over 5-2 second choice That's Right, winner of the My Frenchman at Monmouth but 6th in the Mahony at Saratoga, and 5-1 third choice Boat's a Rockin, making his stakes debut off a close third in an allowance at Penn National. 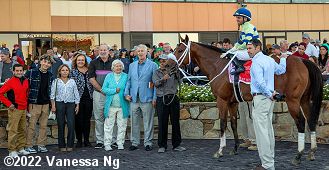 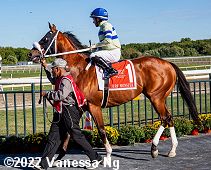 Left: That's Right in the winner's circle. Winning trainer Michael Moore said, "This was my first graded stakes win. I don't even know if I have run in another one. It's easier to run at your own track than shipping. To come here on our greatest day, it's a great thing. "I told a couple people say before the race that if someone is laying on him or near him, we're in trouble. Andy did a great job of settling him down. That's why he finished so well and it worked out great. I thought he might have had a couple lengths on them and he really didn't. After they broke, I was kind of like, 'come on, Andy, go.' He knew better. He really looked like he took off the turn and won the race on the turn."

Right: That's Right in the paddock. Winning jockey Andy Hernandez, celebrating his first graded stakes win said, "I was pretty excited. I am more excited because being a bug boy, not every trainer takes a chance in a graded stakes race with an apprentice. One more month I will lose the bug. This will help my business. I know that horse is pretty quick. Today, he did not go like before, like 4 or 5 lengths in front. He broke a little green, I said, 'oh my gosh, he relaxed the first quarter.' I had a little bumping and he picked it up. This horse is fast. You open the gate, you go to the lead." 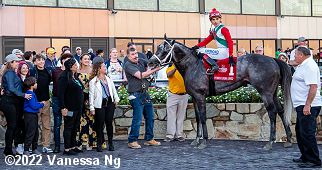 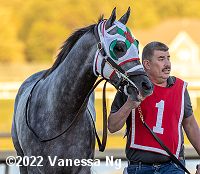 Left: Buy Land and See in the winner's circle. The Guadelupe Preciado trainee improved his record to 5 wins, 3 seconds, and 3 thirds in 15 starts, earning $391,470 for owner-breeder Joseph Imbesi.

Right: Buy Land and See in the paddock before the race.