The richest races on the continent this weekend were run on Saturday at Parx Racing with two $1 million events run at the Bensalem, Pennsylvania oval. Conditions were excellent, with sunny skies and temperatures in the high 60's, with the main track fast and the turf firm.

The co-feature race on Saturday was the $1 million Cotillion Stakes (G1), with a field of 9 three-year-old fillies going 1 1/16 miles on the main track. Green Up was sent of as the 9-5 favorite off wins in the Boiling Springs at Monmouth and the Cathryn Sophia at Parx. In to challenge her included 2-1 second choice Secret Oath, winner of the Kentucky Oaks (G1) and fourth in the Preakness (G1) before finishing second in both the Coaching Club American Oaks (G1) and Alabama (G1) at Saratoga, and 9-2 third choice Adare Manor, second in the Santa Anita Oaks (G2) and Black-Eyed Susan Stakes (G2).

Also on the card was the Pennsylvania Derby (G1) won by Taiba plus the Gallant Bob Stakes, Turf Monster Stakes, and Alphabet Soup Stakes. 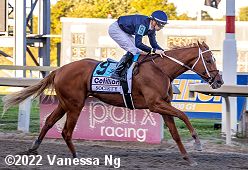 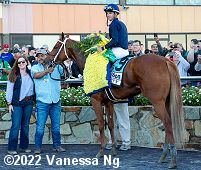 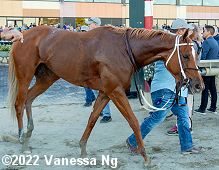 Left: Society in the winner's circle. Winning trainer Steve Asmussen said, "You look at her one loss and she lost all chance at the start against a great group that she wasn't quite up to. Then she comes back and runs the fastest race [she's] ever run you feel pretty good."

Right: Society heads back to the barn after the race. Winning jockey Florent Geroux said, "I would have been content to sit off if the pace was honest enough, but honestly after three jumps I was already on the lead and I was able to clear everyone else very nicely without effort. From there, I tried to keep her as relaxed as I could. She came back very nicely down the backside and down the lane I had plenty of horse left." 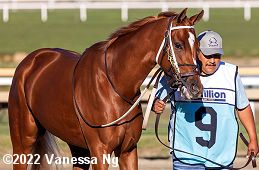 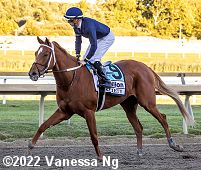 Left: Society walks over before the race.

Right: Society returns after the race. Geroux added, "She's extremely quick. Those horses have a ton of speed, so the worst thing you can do is try to and get them off rhythm. You want to try and stay the same tempo and keep them relaxed." 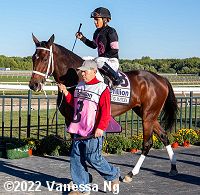 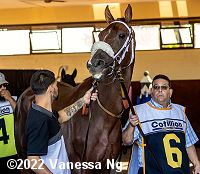 Left: Second place finisher Morning Matcha in the paddock before the race. Trainer Butch Reid said, "That was the plan, I knew she'd come running. That one horse [Society] got loose, you know, but she came flying. She ran on the inside, and just a great job by Paco. She ran great."

Right: Third place finisher Secret Oath in the paddock. Trainer D. Wayne Lukas said, "I was concerned when (Society) was on the far side over there approaching the 3/8 pole. We were really going to have to pick it up in order to catch the one that was cruising up front. Secret Oath ran her race today. I didn't see anything that I didn't like except we were trying to chase down a tremendous bias. We weren't the only ones chasing, what, 5, 6, 7, 8 lengths? We were all chasing the bias." She will go next in the Breeders' Cup Distaff. 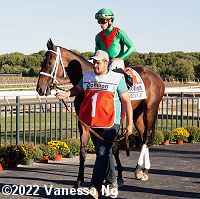 Right: Fourth place finisher and beaten favorite Green Up in the walking ring. The Todd Pletcher trainee has a record of 4 wins, 1 second, and 0 thirds in 6 starts, earning $277,160 for owner Team Valor International.

Right: The fillies break from the gate for the Cotillion.

Jockey Dexter Haddock sent 13-1 Far Mo Power to the lead first time by and he set fractions of 24.06, 47.54, and 1:11.50 while pressed by Mind Control and stalked by Derby House. In the stretch jockey John Velazquez sent Mind Control to challenge, poking his head in front through 7f in 1:23.93 as Far Mo Power drifted out and brushed him. Far Mo Power regained the lead to finish a neck in front in 1:36.59. It was a long 11 3/4 lengths back to 30-1 Dontmesawithem third. Velazquez claimed foul against Haddock for interference and after a stewards' inquiry, Far Mo Power was disqualified and placed second, moving Mind Control up to the win slot. 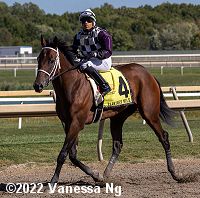 Left: Mind Control in the winner's circle, winning the Parx Dirt Mile for the second year in a row. Winning jockey John Velazquez said, "He came out on me first at the top of the stretch. My horse is a fighter. When he came out the first time, my horse got head-and-head with him again and I thought I had him. But, at the sixteenth pole, when he hit him left handed and he touched him, that got my horse intimidated and off balance." Byron Hughes, assistant to trainer Todd Pletcher said Mind Control would go next in the Breeders' Cup Dirt Mile.


The $200,000 Greenwood Cup Stakes (G3) featured a field of 8 older horses going 1 1/2 miles around 3 turns of the main track. Brooklyn (G2) and Birdstone Stakes winner Fearless was sent off as the 9-10 favorite over 7-2 second choice The Reds off an allowance win at Saratoga, and 6-1 third choice Magic Michael, last year's winner but second in an allowance last out after finishing third in the Deputed Testimony at Laurel. 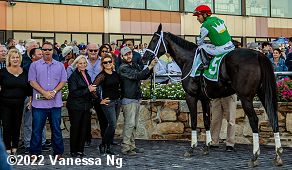 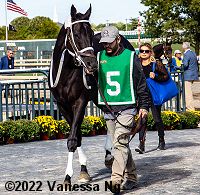 Left: Ridin With Biden in the winner's circle. Winning trainer Butch Reid said, "He really likes Paco's feel. You can't take too much hold of this horse, because he'll run off with you, but Paco just did a tremendous job putting them to sleep down the backside and that was it. I thought after looking at the race that he was going to make the lead. I was pretty comfortable about that once he slowed down and I saw close to 50 (seconds) for the half. Then I felt good."

Right: Ridin With Biden in the paddock. Winning jockey Paco Lopez said, "He is no easy horse to ride, he is very strong. He rated very good. I didn't see no other speed and I took the lead and got very good position. He gives me a lot of heart attacks to ride this horse. He is a classy horse, though. He does not want to give the lead up when he gets it. I liked my chances and Butch said he was ready to go." 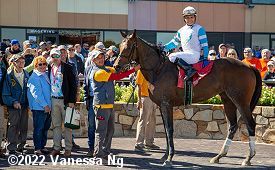 Kicking off the Saturday stakes action was the $200,000 Imply Stakes for Pennsylvania-bred 2-year-old fillies sprinting 6 1/2 furlongs on the main track. Jockey Mychel Sanchez sent 3-5 favorite Flor de Sombra to the lead through fractions of 22.16 and 45.17 while pressed by 30-1 Uptown Amanda and stalked by 5-2 second choice Marion Grace. In the stretch Flor de Sombra continued to lead through 3/4 in 1:12.25 but 5-1 third choice Midnight Parade, 4th early under David Cora, rallied to win by 2 lengths over 15-1 Pachelbel in 1:19.41. It was another 1 3/4 lengths back to pacesetter and favorite Flor de Sombra third.

Winning trainer Bernard Haughton said, "I told David that we were in a bad post position and if there was any chance to get off the inside to do it. I always thought she would like the 6 1/2 furlongs. "She was very mature and professional. When she worked, the jockeys always had a strong hold of her. You could tell she had more under the hood." 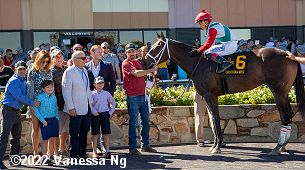 The $200,000 Prince Lucky Stakes featured a field of 8 Pennsylvania-bred 2-year-olds sprinting 6 1/2 furlongs on the main track. 33-1 Respirator was quickest out of the chute through an opening quarter of 22.47 before 2-5 favorite Gordian Knot took over on the far turn through a half in 45.99. Turning for home Gordian Knot opened up a 4 length lead through 3/4 in 1:11.44. 11-2 third choice Keithsenshelloooo, third early, gained late to no avail as Gordian Knot under jockey Guadelupe Preciado cruised to a 2 length win in 1:18.19. It was another 3 1/4 lengths back to 38-1 Veeson third.

Winning jockey Guadelupe Preciado said, "It was an awesome trip. I put him on the bit, and I felt so comfortable the whole way. He's like an older horse. He's very mature and getting better." 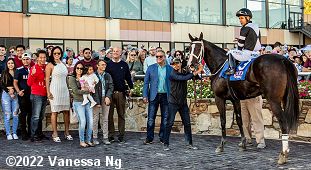 The $200,000 Plum Pretty Stakes featured a field of 7 Pennsylvania-bred older fillies and mares going 1 mile 70 yards on the main track. Jockey Paco Lopez sent 11-4 second choice Love in the Air to the lead first time by through fractions of 24.22, 48.43, and 1:13.04 while pressed by 15-1 Midnight Obsession and stalked by 3-10 favorite Leader of the Band. In the stretch Love in the Air drew away from the field to win by 2 lengths over Leader of the Band in 1:42.69. It was another 4 1/4 lengths back to 17-1 Ninetypercentbrynn third.

Winning trainer John Servis said, "She moved really nice. Actually, with my other filly, Leader of the Band, dragging Johnny [jockey Velazquez] down the backside, I was afraid he might go too soon and kill each other off. We bought her (from previous trainer Mark Casse), sent her right to the track, and I literally trained her three days. She wasn't going well. Nothing major, just wasn't going good. We kicked her out, gave her plenty of time, and she's come back a racehorse."