The co-feature on Saturday at Parx Racing near Philadelphia was the $1 million Pennsylvania Derby (G1) for 3-year-olds going 1 1/8 miles on the main track. Conditions were excellent, with sunny skies and temperatures in the mid 70's, with the main track fast and the turf good. After expected favorite and Kentucky Derby (G1) winner Medina Spirit and Travers 4th place finisher Keepmeinmind scratched, Derby third place finisher and Belmont (G1) runner-up Hot Rod Charlie was sent off as the 9-10 favorite in the field of 8, off his first place finish in the Haskell (G1) but disqualified to 7th for interference. In to challenge him included 7-2 second choice Speaker's Corner, making his stakes debut off consecutive allowance wins, and 15-4 third choice Midnight Bourbon, second in the Travers (G1) after finishing 2nd in the Preakness (G1) and clipping heels in the Haskell.

Also on the card was the Cotillion Stakes (G1) won by Clairiere plus the Parx Dirt Mile, Greenwood Cup, and Plum Pretty Stakes. 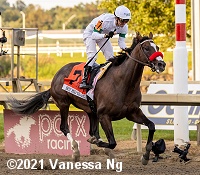 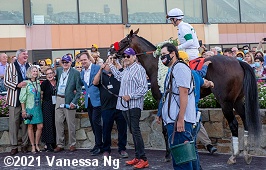 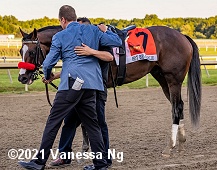 Left: Hot Rod Charlie in the winner's circle. Winning trainer Doug O'Neill said, "He's had so many hard-fought races and to not have a G1 on his resume seemed a little bit unfortunate for a horse as good as he is. It's good to finally get it."

Right: Hot Rod Charlie with trainer Doug O'Neill after the race. O'Neill added, "Obviously, there are some big-time horses out there (in the Classic) that have more experience than him, but he's coming around at a good time. These 3-year-olds this time of year seem to have had a lot of success jumping up against the older competition. Hopefully, that holds true here." 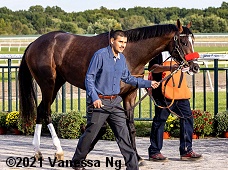 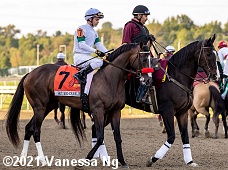 Left: Hot Rod Charlie in the paddock. Winning jockey Flavien Prat said of the foul claim, "It was absolutely not intentional. My horse, he looked at something on the inside, then he swapped leads. It was nothing I can control, but it was absolutely not intentional. Especially after what happened last time, I would never try to do something like this."

Right: Hot Rod Charlie in the post parade led by Lava Man. Prat added, "I was watching races all day long, wow, that's not what I was expecting. But I thought I was on the best horse, he was training absolutely perfect going into the race, so I said I won't change his style and it worked out well. I thought I was under control the whole race and when it was time to go he kind of messed around a little bit and he swapped leads, but after I thought I was in control." 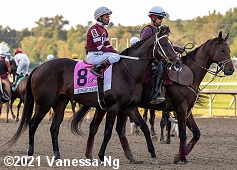 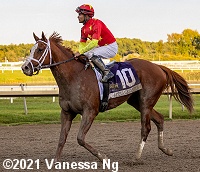 Left: Second place finisher Midnight Bourbon in the post parade. Trainer Steve Asmussen said of the claim of foul, "Dropping him once this year ain't enough? That's exactly what I got to say. Anybody who's ever watched a horse race knows that it [cost us momentum]. Where the [heck] is he going?" 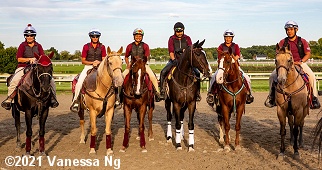 Left: Lava Man (third from the right) waits with the other pony horses for the post parade.

Right: Shortly after the start of the Pennsylvania Derby.

The $300,000 Gallant Bob Stakes (G2) featured a field of five 3-year-olds (after 2 scratches) sprinting 6 furlongs on the main track. Jackie's Warrior was sent off as the 1-20 favorite off wins in the Amsterdam (G2) and Allen Jerkens Memorial (G1) at Saratoga. In to challenge him included 10-1 second choice Real Talk, winner of the Jersey Shore Stakes at Monmouth, and 12-1 third choice Beren, winner of the Parx Summer Sprint Stakes.

Jockey Joel Rosario sent Jackie's Warrior to the lead out of the chute through fractions of 21.97 and 44.13 while pressed by Real Talk and stalked by Beren. Turning for home, Jackie's Warrior had left the field in his wake, opening up by 7 lengths midstretch through 5f in 55.97. Under a hand ride Jackie's Warrior finished 6 3/4 lengths clear of 19-1 longest shot Pickin' Time in 1:08.64. It was another 3 1/4 lengths back to Real Talk third. 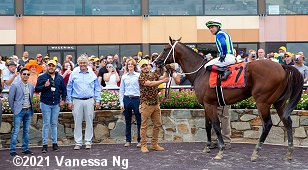 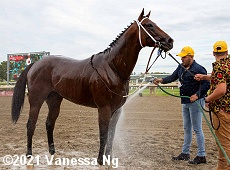 Left: Jackie's Warrior in the winner's circle. Winning trainer Steve Asmussen said, "He's very exciting to watch. What a very special horse he's been. He's run some extremely game races and we're hoping that was the ideal prep for the Breeders' Cup Sprint."

Right: Jackie's Warrior poses while he gets hosed off. Asmussen added, "He ran so valiantly with Life Is Good (in the Allen Jerkens). They both ran such a good race that day that we felt this race and giving him a little more time from here to the Breeders' Cup was the right thing to do." Jackie's Warrior flies to California on Tuesday to prepare for the Sprint.

The $300,000 Turf Monster Stakes (G3) featured a field of 9 older horses sprinting 5 furlongs on the turf. Highlander Stakes (G1) third place finisher Caravel was sent of as the 9-5 favorite over 2-1 second choice Carotari, 2nd in the Troy (G3), and 7-2 third choice Beer Can Man, an allowance winner last out at Del Mar.

4-1 fourth choice Firecrow dueled for the lead with 27-1 Admiral Abe down the backstretch and around the turn through an opening quarter of 22.63 while stalked by Beer Can Man and Caravel. Turning for home, Admiral Abe gained a short lead through a half in 46.44 but 108-1 longshot Hollywood Talent, 7th early and wide throughout under Ricardo Santana Jr., swept to the front inside the 1/8 pole to win going away by 1 1/4 lengths over Beer Can Man in 59.51. It was a neck back to Admiral Abe third, while favorite Caravel tired late to check in 6th beaten 4 1/4 lengths. 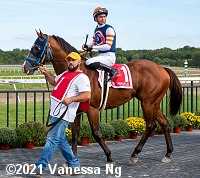 Left: Hollywood Talent in the winner's circle. Winning trainer Juan Vazquez said, "I'm not surprised, I've been waiting for this race all year long. Today, there was a lot of speed, and he came from behind and finished very well. We might try the Breeders' Cup (Turf Sprint). He is a 10-year-old and I try to take care of him the best that I can." Winning jockey Ricardo Santana Jr. said, "[Vazquez] and my agent Ruben Munoz brought me from Panama and [Vazquez] signed for my papers when I was 16 years old. I was riding everything for him (at Delaware Park), and every horse I ride for him I have a shot. The turf was soft today and he was traveling beautiful and I was really happy with him and when we turned for home and I asked him the horse responded really well." 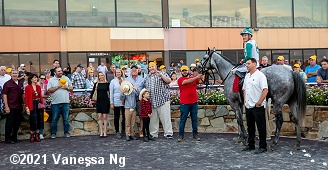 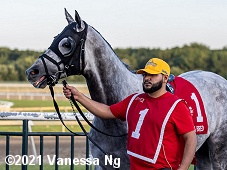 Left: You Must Chill in the winner's circle. Winning trainer Jamie Ness said, "We finally got him on the grass last time. We had to go to Penn National to do it and he ran on a really bad turf course like this. So, we knew he could handle the turf course today."

Right: You Must Chill in the paddock before the race. Winning jockey Frankie Pennington said, "He was hitting some spots where he was in the bit, then he was bobbling because it was very soft. I broke good and put him in the fourth position. He was dragging me the whole way. At the top of the stretch, it was a waiting game. Once I got out, he took off and exploded."