The richest races on the continent this weekend were run on Saturday at Parx Racing with two $1 million events run at the Bensalem, Pennsylvania oval. Conditions were excellent, with sunny skies and temperatures in the mid 70's, with the main track fast and the turf good.

The co-feature race on Saturday was the $1 million Cotillion Stakes (G1), with a field of 8 three-year-old fillies going 1 1/16 miles on the main track. Clairiere was sent off as the 5-2 favorite off her 2nd place finish in the Alabama (G1) after finishing third in the Coaching Club American Oaks (G1). In to challenge her included 11-4 second choice Always Carina, 2nd in the Mother Goose (G2) before disappointing 4th in the Test (G1), and 3-1 third choice Obligatory, 2nd in the Acorn (G1) before finishing 5th in the Test.

Jockey John Velazquez sent Always Carina to the lead first time by through fractions of 24.92, 49.67, and 1:13.87 while pressed by Obligatory and stalked by 9-1 Maracuja. Turning for home Always Carina tired as Clairiere, 6th early under Ricardo Santana Jr., came out wide to sweep to the front through 1 mile in 1:38.14. Kept to task by Santana, Clairiere drew off to win by 2 1/2 lengths over Obligatory in 1:44.31. It was another 1/2 length back to 7-2 fourth choice Army Wife third.

Also on the card was the Pennsylvania Derby (G1) won by Hot Rod Charlie plus the Gallant Bob Stakes, Turf Monster Stakes, and Alphabet Soup Stakes. 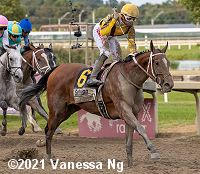 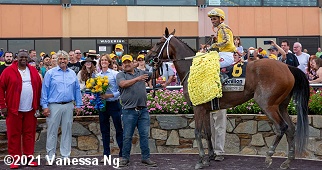 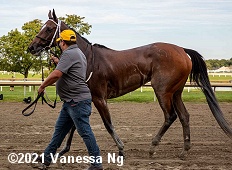 Left: Clairiere in the winner's circle. Winning trainer Steve Asmussen said, "She looked really comfortable down the backside, she was carrying him along nicely within herself and within striking range. She's kept herself in great company all year and is just getting good when it matters most."

Right: Clairiere heads back to the barn after the race. Winning jockey Ricardo Santana Jr. said, "I broke her maiden last year at Churchill and she's such a sweetheart and I was really comfortable with her and she kicked on really well. I had too much horse and I was just waiting turning for home." 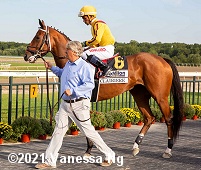 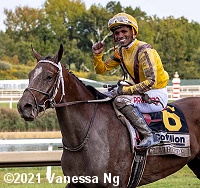 Left: Clairiere in the paddock before the race with trainer Steve Asmussen. Asmussen said she could go next in the Breeders' Cup Distaff, adding, "I think she's consistently getting faster at the right time."

Right: Clairiere returns after the race. Asmussen added, "I can't tell you what it means for Clairiere and Stonestreet and that family that she comes from to have her first Grade 1 win." 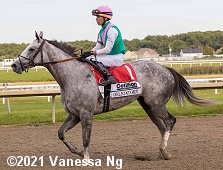 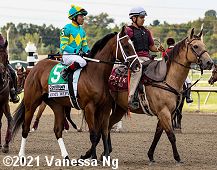 Left: Second place finisher Obligatory returns after the race. Jockey Jose Ortiz said, "I knew there was going to be no speed, so I tried to be a little aggressive from the gate, which I was and I ended up in a good position, you got a shot to win."

Right: Third place finisher Army Wife in the post parade. Jockey Joel Rosario said, "I lost a little bit of my momentum right there. But she was still fighting." 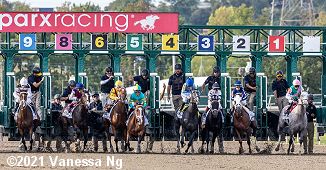 
The $150,000 Parx Dirt Mile featured a field of 7 older horses going 1 mile on the main track. Metropolitan Handicap (G1) winner and Whitney (G1) third place finisher Silver State was sent off as the 4-5 favorite over 5-2 second choice Mind Control, 4th in the Forego (G1), and 9-2 third choice West Will Power, second in the Philip Iselin (G3). 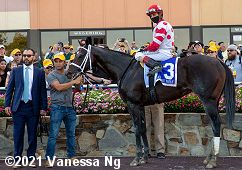 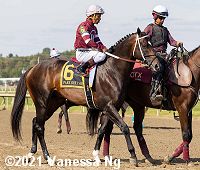 Left: Mind Control in the winner's circle. Byron Hughes, assistant to winning trainer Todd Pletcher said, "I was watching Silver State make his move around the turn. He got the momentum and the jump on us on the outside, and for Mind Control to fight back like that was pretty impressive." Winning jockey John Velazquez added, "He didn't give up, I didn't give up. When you ask for more, they give you more. It's a great feeling when they give it to you."

Right: Second place finisher and beaten favorite Silver State in the post parade. Jockey Ricardo Santana Jr. said, "He passed the other horse easy, and as soon as he touched the lead, I don't know if he saw something or what, but he pulled himself up."

Jockey Joel Rosario sent Sea Foam to lead through fractions of 24.82, 50.07, 1:16.13, and 1:42.11 while pressed by 10-1 Sheer Flattery and stalked by 11-2 Shooger Ray Too. Turning for home for the last time, Sea Foam tired as Sheer Flatter inherited the lead through 10f in 2:06.78. 24-1 Last Samurai, came out wide to gain a short lead midstretch but Magic Michael, last early under Frankie Pennington, circled the field and rallied to get up by a neck in 2:32.01. It was another 1 1/4 lengths back to Sheer Flattery third, while favorite Moretti failed to rally and finished 5th beaten 9 1/2 lengths. 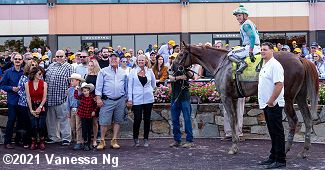 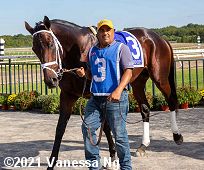 Left: Magic Michael in the winner's circle. Winning trainer Jamie Ness said, "He shipped over to Monmouth and he's not a very good shipper. He washed out and acted up in the post parade. Mentally, he just didn't do it. That's why we ran today, because we were local. I wasn't really concerned about the distance. He seems like he wants to run all day. We've been pointing for this race for about two months. It came up a little bit stronger than we thought it would. We took a shot. My jock knows this track so well and I think he won the race for me." Winning jockey Frankie Pennington added, "The longer I was sitting, the more he wanted to go. Once I straightened him up and got him out in the clear, he really took off."

Right: Fifth place finisher and beaten favorite Moretti in the paddock. The Todd Pletcher trainee has a record of 4 wins, 4 seconds, and 3 thirds in 16 starts, earning $367,250 for owners Repole Stable and Eclipse Thoroughbred Partners.


Kicking off the Saturday stakes octet was the $100,000 Plum Pretty Stakes featuring a field of 8 Pennsylvania-bred older fillies and mares going 1 1/16 miles on the main track. 6-1 fourth choice Precious set the pace of 24.62 and 48.98 while pressed by 11-10 favorite Chub Wagon and stalked by 47-1 Promised Storm. On the far turn Chub Wagon took over through 3/4 in 1:12.75 and opened up a 3 length lead midstretch through 1 mile in 1:38.28. 2-1 second choice Vault put in a strong rally from 7th but Chub Wagon, confidently ridden by Jomar Torres, held her off to win by 1/2 a length in 1:44.80. It was another 1 1/2 lengths back to 9-2 third choice Marion Francis third. Joel Rosario aboard Vault claimed foul against Torres for interference in the stretch but the claim was disallowed. 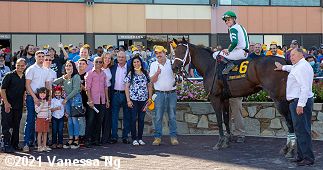 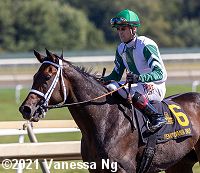 Left: Chub Wagon in the winner's circle. Winning trainer Guadalupe Preciado said, "I believe in Lasix. We were supposed to run in New York at 6 1/2 furlongs. That's the perfect distance, but no Lasix. Next year, probably, we're going to have to deal with that problem."

Right: Chub Wagon returns after the race. Preciado added that Chub Wagon may be done for the year. "We've run back too close a couple of times. This time it wasn't even three weeks, and she ran a huge race."