The feature race on the Friday of Whitney weekend at Saratoga is the $200,000 National Museum of Racing Hall of Fame Stakes (G2) for 3-year-olds going 1 1/16 miles over the inner turf course. Conditions were excellent with sunny skies and temperatures in the mid 80's. American Turf (G2) winner Camelot Kitten was sent off as the 9-5 favorite in the field of 6 (after 3 scratches), off a disappointing 4th place finish in the Belmont Derby (G1). In to challenge him included 3-1 second choice Airoforce, 10th in the Belmont Derby after finishing second in the Penn Mile (G3), and 7-2 third choice Isotherm, unraced since finishing a close second in the Dania Beach (G3) at Gulfstream on January 2.

Jockey John Velazquez sent 4-1 fourth choice Giant Run to the lead first time by and he set fractions of 25.08, 49.17, and 1:12.88 over the firm going while pressed by Airoforce and stalked by 7-1 Strike Midnight. Entering the stretch Giant Run continued to lead through 1 mile in 1:35.79 but tired late. Camelot Kitten, who tracked the pacesetters 3 wide in 4th, came out wide for room and outfinished Airoforce by a nose in 1:41.76. It was another 3/4 length back to Strike Midnight third. 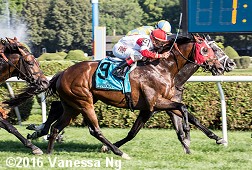 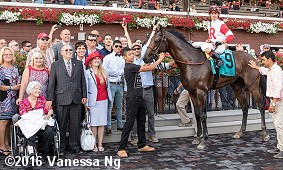 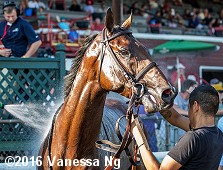 Left: Camelot Kitten in the winner's circle. Winning trainer Chad Brown said, "I thought Irad worked out a really good trip. The slow pace concerned me. The horse overcame a lot today. He didn't run that long ago; it wasn't a great rest between races. He came back and fired another good shot from a difficult post off a slow pace. I thought horse ran great. Watching live I thought he had it for sure and as I walked down I thought he didn't get the greatest bob. Luckily he got his nose down first. The horse deserved to win. He's a horse that's showed up for us every time we've run him outside of the Breeders' Cup on soft turf over there at Keeneland. Otherwise he's been very consistent."

Right: Camelot Kitten gets hosed off after the race. Winning jockey Irad Ortiz Jr. said, "He's the kind of horse that, after watching his replays, you can tell he has gotten much better over time. He waits a little bit on horses so we couldn't make the lead too early. I waited and eased him into the race little by little. The last part I hit a few times coming into the turn and he was ready. He was jumping. I think he might be better at this distance but he's a nice horse; he can definitely still go 1 1/8 and 1 1/4." 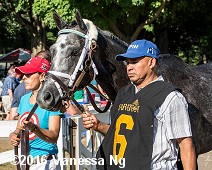 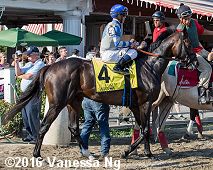 Left: Second place finisher Airoforce in the paddock before the race. The 3-1 second choice pressed the pace under Julien Leparoux, challenged at the 1/16 pole but just missed. The Mark Casse trainee improved his record to 3 wins, 3 seconds, and 0 thirds in 10 starts, earning $672,880 for owner John Oxley.

Right: Third place finisher Strike Midnight heads out for the post parade. The 7-1 fifth choice stalked the pace in third early under Javier Castellano but could not improve, finishing 3th beaten 3/4 length. The Leah Gyarmati trainee improved his record to 2 wins, 1 second, and 1 third in 6 starts, earning $136,690 for owner Treadway Racing Stable.