The $300,000 Nijinsky Stakes (G2) at Woodbine Racetrack is one of the prep races for the major turf races later in the season including the $1 million Woodbine Mile and the $2 million Canadian International. After Marlang scratched the morning of the race, a field of just 6 older horses went to post on Sunday afternoon in this 1 1/4 mile trip over the E.P. Taylor Turf Course. Rahy's Attorney, Canada's champion turf male for 2008, was sent off as the slight 9-5 favorite exiting a win in the King Edward Stakes after finishing a close second in the Connaught Cup. In to challenge him included 2-1 second choice Champs Elysees, exiting a seventh place finish in the Elkhorn at Keeneland after finishing second in the Santa Anita Handicap, and 7-2 third choice Spice Route, fourth in the United Nations at Monmouth last out after finishing second in the Louisville Handicap at Churchill Downs. Severe thunderstorms on Saturday and intermittent showers on Sunday rendered the turf course very soft, but the rains held off during the race with the temperature around 70 degrees.

Soon after the start, jockey Todd Kabel sent 18-1 longest shot French Beret to the front and he was allowed an uncontested lead of as many as 4 lengths through early fractions of 26.26 and 51.74. Favorite Rahy's Attorney stalked the pace in second, in turn 8 lengths ahead of the rest of the field. Regular rider Slade Callaghan sent Rahy's Attorney to challenge for the lead after 5 furlongs, easily passing French Beret after 3/4 in a slow 1:18.06. Entering the stretch, French Beret tired as Rahy's Attorney opened up a 5 length advantage through 1 mile in 1:42.54. 5-1 fourth choice Marchfield, who raced in midpack third most of the way, put in a strong rally three wide but was left with too much ground to make up, as Rahy's Attorney cruised under the line 1 3/4 lengths ahead in a time of 2:08.42. It was a long 5 3/4 lengths back to late running Champs Elysees third. 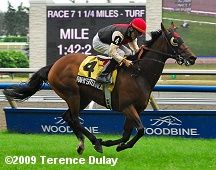 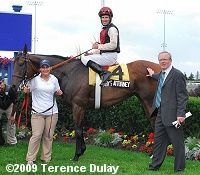 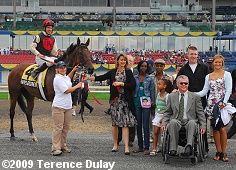 Left: Rahy's Attorney in the winner's circle with trainer Ian Black by his hip. Black said, "I'm in awe of the horse. He's wonderful. He loves to race. He loves to win. He has so much desire and a great mind. I'm honored to be around him."

Right: Rahy's Attorney and his connections pose by the track before heading to the winner's circle. The 5-year-old gelded son of Crown Attorney out of Rahy mare Rahy's Hope improved his record to 9 wins, 3 seconds, and 4 thirds in 22 starts, earning $1,547,979 for breeder Ellie-Boje Farm and co-owners Read Peters and Jean and Jim MacLellan. 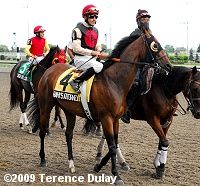 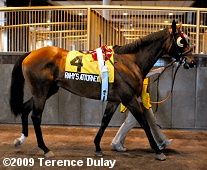 Left: Rahy's Attorney in the post parade. His jockey Slade Callaghan said, "My main job was to get my horse to relax today. He ran really good over a soft turf. I wouldn't necessarily say that might be his best going. He has a heart like no other. You can't ask for anything more than that in a racehorse."

Right: Rahy's Attorney in the inside saddling area before the race. Because of the rain, the horses went straight to the track from there. 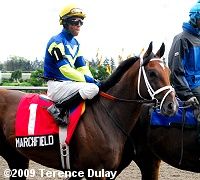 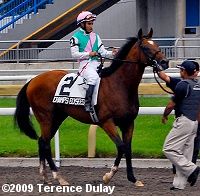 Second place finisher Marchfield in the post parade. The 5-1 fourth choice raced as many as 12 lengths off the pace early under regular rider Patrick Husbands, came off the rail 3-wide into the lane and closed with a rush to get second beaten just 1 3/4 lengths at the line. The Mark Casse trained son of A.P. Indy out of Red Ransom mare Pico Teneriffe improved his record to 6 wins, 8 seconds, and 0 thirds in 21 starts, earning $937,476 for owner-breeder Eugene Melnyk.

Third place finisher Champs Elysees returns after the race. The 2-1 second choice raced in third 11 lengths off the pace under new jockey Alan Garcia, came out 4 wide into the stretch for the drive but evened out late, finishing third beaten 7 1/2 lengths. The Bobby Frankel trained son of Danehill out of Kahyasi mare Hasili improved his record to 5 wins, 7 seconds, and 6 thirds in 25 starts, earning $1,631,147 for owner-breeder Juddmonte Farm.