The $150,000 Connaught Cup Stakes (G3) is the first stakes event of the year run over Woodbine's E.P. Taylor Turf Course. A field of seven older horses went to post on Sunday afternoon in this 1 1/16 mile trip around one turn under ideal conditions, with clear skies, a very firm turf course, and temperatures in the low 70's. As expected, Rahy's Attorney, the 2008 Sovereign Award winner as Canada's champion turf male, was sent off as the 5-2 favorite, unraced since finishing a disappointing ninth in the Mile Championship at Kyoto after finishing sixth in the Shadwell Turf Mile at Keeneland. In to challenge the Ellie-Boje Farm homebred included 3-1 second choice Society's Chairman, winner of an allowance at Keeneland last out after finishing third by a neck in the Tampa Bay Stakes, and 7-2 third choice Sterwins, fifth in the Ben Ali at Keeneland in his last start.

Regular rider Slade Callaghan sent Rahy's Attorney to the front exiting the chute and he set a quick pace of 24.34, 46.94, and 1:10.28 over the firm course, while as many as 2 1/2 lengths in front of 10-1 French Beret who stalked him in second. Entering the long stretch, Rahy's Attorney continued to lead, with a 2 length advantage with a furlong remaining. Sterwins, who had raced at the back of the field early under Patrick Husbands, came out 6 wide into the stretch. Sterwins steadily gained on the pacesetting favorite and got up just in time by a head in a new course record time of 1:38.99. It was another 1 1/2 lengths back to late-running Society's Chairman third. The running time was 0.21 seconds faster than the previous 1 1/16 mile turf record, set in June 1995 by Jet Freighter. 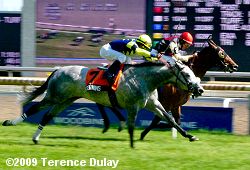 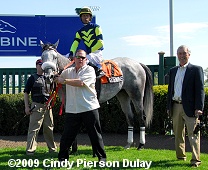 Sterwins in the winner's circle. Winning trainer Malcolm Pierce said, "He trained well into the race. I expected a lot bigger race from him (in the Ben Ali). He ran fifth and not a super effort. We had a lot of time between races coming into that spot. I was hoping that race would move him forward for today. Apparently, as a 3-year-old he was more nervous. With age, he has settled down. I don't think he really has to carry his surface with him. Things have been going well. I hope nothing changes." 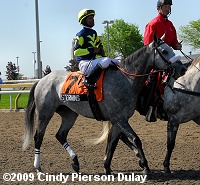 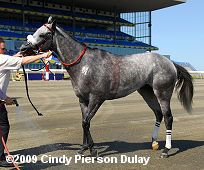 Left: Sterwins returns after the race. Winning jockey Patrick Husbands said, "I set him down and he gave me everything. I had Slade (Callaghan aboard Rahy's Attorney) beat the last four strides and his horse dug back in. (I said), 'Wow!' He's really called a racehorse. It's unbelievable getting this horse back. He got hurt (last year). He ran a big race today."

Right: Sterwins gets hosed off on his way to the barn. 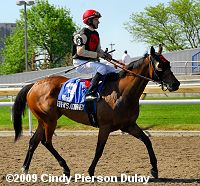 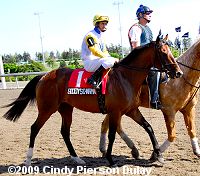 Left: Second place finisher and beaten favorite Rahy's Attorney returns after the race. The 5-2 favorite took command soon after the start under regular jockey Slade Callaghan, was all-out in the stretch but failed to hold off Sterwins in the final strides. The Ian Black-trained son of Crown Attorney improved his record to 7 wins, 3 seconds, and 4 thirds in 20 starts, earning $1,118,734 for owner-breeder Ellie-Boje Farm.

Right: Third place finisher Society's Chairman in the post parade. The 3-1 third choice raced at the back of the field down the backstretch under jockey Jono Jones, came 4-wide into the lane and closed well to get third place money, beaten 1 1/2 lengths. The Roger Attfield trainee improved his record to 5 wins, 3 seconds, and 2 thirds in 13 starts, earning $294,029 for owner Charles Fipke.