The feature race on the Civic Holiday at Woodbine is the $300,000 Nijinsky Stakes (G2), a 1 1/4 mile trip on the E.P. Taylor Turf Course for older horses. A field of seven entered, with New Jersey shipper Strike A Deal sent off as the 9-10 favorite, exiting a second place finish by a neck in the United Nations at Monmouth Park last time out. In to challenge the Alan Goldberg trainee included 9-2 second choice Independent George, who was fourth in the United Nations last time out, and top local hope Rahy's Attorney at 5-1, winner of the Connaught Cup back in May and then second in the Singspiel and third in an allowance last out.

Independent George was quickest out of the gate and led the field for the first quarter mile in a slow 26.62, before jockey Jose Lezcano sent favorite Strike A Deal to the front to lead down the backstretch. Strike A Deal walked through fractions of 50.59, 1:14.14, and 1:37.31 over the very firm course, with Independent George and 11-2 fourth choice Seaside Retreat stalking him most of the way. At the top of the stretch, jockey Patrick Husbands came out three wide for room and pulled alongside pacesetting Strike A Deal. The pair battled the length of the stretch, but Seaside Retreat fought off Strike A Deal at the 1/8 pole and gradually pulled away to win by a length in 2:00.60. It was another 2 1/4 lengths back to 9-1 French Beret third. The final time set a new course record for 1 1/4 miles on the Woodbine turf, shaving 8/100 second off the previous record set by 3-year-old filly Mrs. Lindsay in the 2007 E.P. Taylor Stakes. 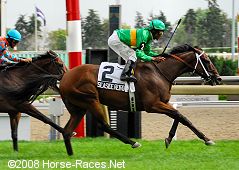 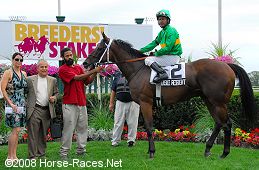 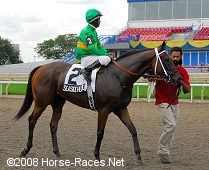 Left: Seaside Retreat in the winner's circle. Winning trainer Mark Casse said, "I think he's always been a talented horse. Maybe, we got a little bit of Derby fever and maybe it messed us up a little bit. We enjoyed the experience. His pedigree has always said grass. It just took us a little while to get there. We've had a few bumps along the road. It's nice when you have an owner like Bill (Farish, Jr.), who never questions what you do. We gave this horse a lot of time. (He) never once asked, 'Are you going to get him back.' He's always done what's best for the horse. It has paid off. If we can keep him training every morning and behaving, (the Northern Dancer Breeders' Cup Turf) is where we'll go next." The win was Mark Casse's 999th as a trainer, leaving him only 1 win shy of the 1,000-win career milestone. 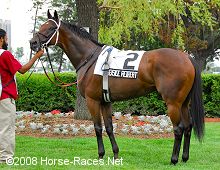 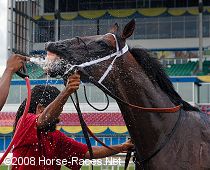 Left: Seaside Retreat strikes a pose in the paddock before the race. Winning jockey Patrick Husbands said, "I had a problem before the race. One of the speed horses was Slade (Callaghan, aboard Rahy's Attorney) and he's not going to go to the lead. I had to get to the outside of him. I don't want to sprint home and get beat sprinting home. I tried (to get outside of) Slade down the back twice and he let me out. From there I knew it would (take) a tough horse to beat him coming home. I nearly fell off, the first jump. He has a mind of his own. Now he's getting back to where he was when he was two and three. Right now, we're looking forward to the (Canadian) International."

Right: Seaside Retreat enjoys a drink while he is hosed off after the race. 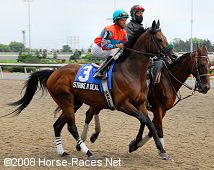 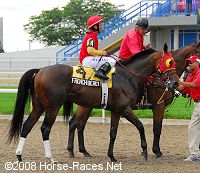 Second place finisher Strike a Deal in the post parade. The 9-10 favorite led the field most of the way down the backstretch under jockey Jose Lezcano, dueled with Seaside Retreat from the 5/16 to the 1/8 pole then yielded grudgingly to the eventual winner. The Alan Goldberg trainee improved his record to 3 wins, 6 seconds, and 1 third in 13 starts, earning $791,645 for owner Jayeff B Stables.

Third place finisher French Beret returns after the race. The 9-1 fifth choice settled back in fifth out in the 2-path down the backstretch under new jockey Eurico Rosa Da Silva, came out four wide into the lane and was all-out through the stretch to pass tiring runners, nosing out Rahy's Attorney late to get third place money, beaten 3 1/4 lengths. The Mark Frostad trainee improved his record to 3 wins, 5 seconds, and 10 thirds in 28 starts, earning $607,425 for owner-breeder Sam Son Farms.