Monmouth Park in Oceanport, New Jersey hosted two Breeders' Cup Challenge races on Saturday afternoon. The winners of the Challenge races earn an automatic berth in the corresponding Breeders' Cup World Championships race, to be run on October 24-25 at Santa Anita. The 14,061 in attendance enjoyed sunny skies and temperatures in the high 70's, although overnight rain rendered the turf course yielding.

The $750,000 United Nations Stakes (G1) features horses with the Breeders' Cup Turf as the ultimate goal, and it drew a field of eight older horses to contest the 1 3/8 mile trip around three turns of the turf. Champs Elysees, shipping in from California where he was sixth in the Charlie Whittingham at Hollywood last time out, was sent off as the 11-10 favorite over 5-2 second choice Strike A Deal, winless in over a year and exiting a fourth place finish in the Manhattan Handicap. Equitable, winner of an allowance event at Belmont last time out, was the 5-1 third choice.

14-1 shot Presious Passion went to the lead first time down the backstretch and was allowed an uncontested lead of as many as 1 1/2 lengths while setting a slow pace of 24.44, 49.16, 1:14.31, and 1:38.76 over the yielding turf course, saving ground along the rail the whole way. 72-1 longest shot Ra De Dean stalked him in second, while favorite Champs Elysees was unhurried near the back of the field. Around the far turn, jockey Eddie Castro asked Presious Passion to accelerate as Strike A Deal, fifth early, was closing well on the outside. Strike A Deal gained on the pacesetter through the stretch, but Presious Passion was up to the challenge, holding him off in the final strides by a neck to get the win in 2:13.88. It was another 1 1/4 lengths back to Equitable third, while favorite Champs Elysees came up empty when asked and could not improve his position, finishing sixth. 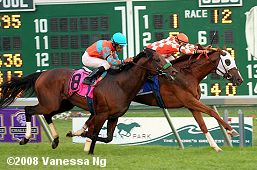 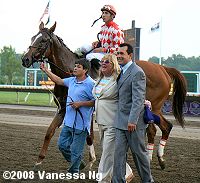 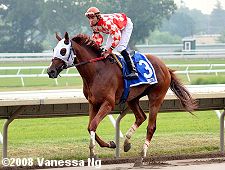 Left: Presious Passion heads for the winner's circle with trainer Mary Hartmann (center). His trainer Mary Hartmann, celebrating her first Grade 1 victory, said,."I'm shaking. This is the best feeling in the world. I'm just enjoying the win today. I'll talk with the owners, Pat and Frank Generazio, to see what path we'll take to get to the Breeders' Cup, but that's the plan for sure. It didn't bother me at all when I saw the early fractions of :24 and then :49. I thought he might sprint away a little bit from there and make them come and catch him, but it all worked out perfectly. I don't think the 1 3/8 is his best distance. I think 1 1/2 miles is. He's a very easy horse to train. I think he'll just get better from here. This is just amazing." 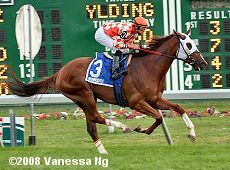 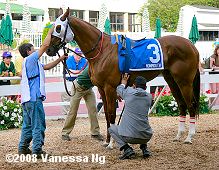 Left: Presious Passion leads first time by. His jockey Eddie Castro said, "I got the early lead pretty easily. I didn't have to use too much horse. I was able to relax on the front end and get soft fractions. At the 3/8 pole, I just let him go and he kept on going."

Right: Presious Passion gets saddled in the walking ring. He kicks, so they don't saddle him in a stall. 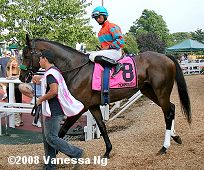 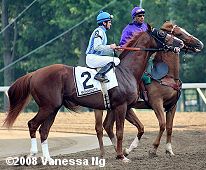 Left: Second place finisher Strike a Deal heads out of the paddock before the race. The 5-2 second choice stalked the pace 2 or 3 wide the whole way around under new rider Jose Lezcano, came three wide into the lane but could not get by the winner. The Alan Goldberg trainee improved his record to 3 wins, 5 seconds, and 1 third in 12 starts, earning $731,645 for owner Jayeff B Stables.

Right: Third place finisher Equitable is a bit fractious during the pre-race warm up. The 5-1 third choice saved ground in fourth around all three turns under regular rider Kent Desormeaux, ran into traffic at the top of the stretch and finished well along the rail to get third. The Bill Mott trainee improved his record to 3 wins, 2 seconds, and 2 thirds in 8 starts, earning $237,306 for owner-breeder Pin Oak Stable. 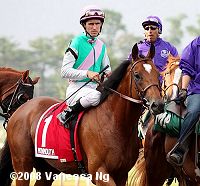 Sixth place finisher and beaten favorite Champs Elysees in the post parade. The 11-10 favorite saved ground racing near the back of the field under jockey Ramon Dominguez, but came up empty when asked, finishing sixth on the yielding turf. The Bobby Frankel trainee has a record of 3 wins, 6 seconds, and 4 thirds in 16 starts, earning $578,147 for owner-breeder Juddmonte Farms.


The $300,000 Salvator Mile (G3) features older horses going 1 mile on the main track, with the winner earning a spot in the field of the Breeders' Cup Dirt Mile. Gottcha Gold, second in the Pimlico Special last time out, was the 9-10 favorite in the field of six over 7-2 second choice Indy Wind, winner of the Frisk Me Now at Monmouth in June. 4-1 Honest Man, an allowance winner at Delaware Park last out, was the third choice on the board.

Gottcha Gold was hustled to the lead by jockey Eddie Castro around the clubhouse turn ad he set a quick pace of 23.12, 46.06, and 1:10.09 while as many as 3 1/2 lengths clear of the rest of the field, led by 13-1 longest shot Better Than Bonds who stalked the pace in second. Better Than Bonds tired after 6 furlongs, but 8-1 Notional, who saved ground back in fifth early, closed the gap on the turn and ran right by Gottcha Gold at the furlong marker. Notional drew away through the stretch to win by 2 1/4 lengths over Gottcha Gold in 1:35.84 over the fast main track. It was another 2 1/4 lengths back to Honest Man third. 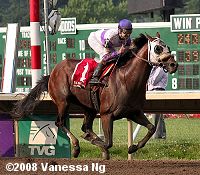 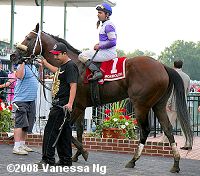 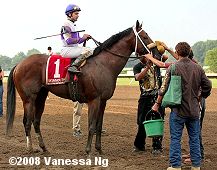 Left: Notional in the winner's circle. His jockey Joe Bravo said, "I was sitting way off the pace early. and when I asked him, he went from about 6 or 7 lengths back to right up with the leader. I thought I might have moved too soon, but luckily not. Gottcha Gold was battling back, but my horse put him away inside the 1/16 pole and ran on from there."

Right: Notional gets sponged off after the race. 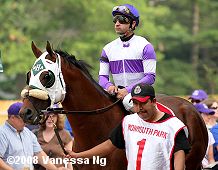 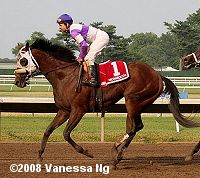 Left: Notional heads out of the paddock before the race. His trainer Mark Hennig, who watched the race on television, said, "Mr. (owner Paul) Reddam thought the artificial surface in California wasn't suiting him well. He sent him to me in New York at the beginning of June. Doug (former trainer O'Neill) and I talked about him. He was frustrated out there. He didn't know if he could attribute it to the surface or his injury after the Florida Derby. Doug and I worked together well, it was an East-West attack."

Right: Notional returns after the race. 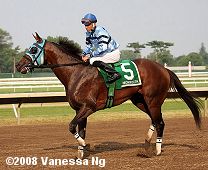 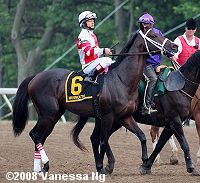 Left: Second place finisher and beaten favorite Gottcha Gold returns after the race. The 9-10 choice drew well clear on the clubhouse turn under jockey Eddie Castro, saved ground the whole way and battled with the winner to the 1/8 pole before giving way. The Eddie Plesa Jr. trainee improved his record to 8 wins, 6 seconds, and 1 third in 27 starts, earning $887,420 for owner-breeder Centaur Farms Inc.

Right: Third place finisher Honest Man in the post parade. The 4-1 fourth choice bobbled at the start, raced close to the pace out wide throughout under jockey Gabriel Saez, and gained on the leaders into the stretch but lacked the needed response late, finishing third. The Larry Jones trainee improved his record to 5 wins, 1 second, and 1 third in 9 starts, earning $180,800 for owners WinStar Farm LLC and Fox Hill Farm. 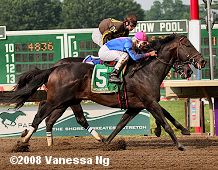 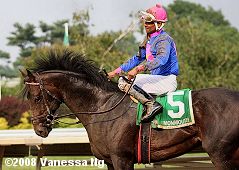 The first stakes race of the afternoon was the $75,000 Mr. Prospector Stakes for older horses sprinting 6 furlongs on the main track. 11-10 favorite Joey P. battled on the front end with 3-1 second choice Mr Umphrey through a quarter in 21.85 and half in 44.46. Entering the stretch, Joey P. opened up on Mr. Umphrey to a 2 length advantage at the 1/8 pole, getting 5 furlongs in 56.43. However, 9-2 third choice Maddy's Lion, who trailed the field early, came three wide into the lane and closed with a rush on the outside to pass the entire field, getting up to win by a neck in 1:09.34 under jockey Carlos Marquez Jr. It was another 3 3/4 lengths from Joey P. back to Mr. Umphrey third.
Results chart from Equibase 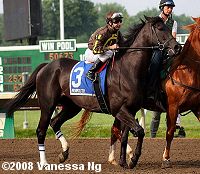 Second place finisher and beaten favorite Joey P. Owned by John Petrini, he won the Charles Town Invitational Dash last out which was his first win ever outside of New Jersey. He has 15 wins in 31 career starts.