On Sunday afternoon, Woodbine Racetrack in Toronto hosted the $150,000 Natalma Stakes (G3), a 1 mile trip around one turn of the E.P. Taylor Turf Course for 2-year-old fillies. This year, with the introduction of the new Grey Goose Breeders' Cup Juvenile Fillies Turf to be run on October 24 at Santa Anita, the Natalma was designated a Breeders' Cup Challenge "Win and You're In" event, with the winner earning a spot in the field. Steady rains on Saturday afternoon and overnight rendered the turf course soft, and the temporary rail was set in Lane 5 (40 feet out).

Lady Shakespeare, a full sister to multiple Grade 1 winner Shakespeare, was sent off as the 7-4 favorite in the field of ten, coming off a win in her debut in a 6 furlong maiden race over the same turf course. In to challenge the Charles Fipke homebred included 9-2 second choice C Karma, third in the Ontario Debutante last time out and making her first start on turf, and 5-1 third choice After The Applause, second in the Ontario Debutante after winning her debut at Calder Race Course.

7-1 Laragh went to the lead exiting the chute and she set fractions of 23.30, 47.34, and 1:12.60 over the soft going while being stalked by 13-1 Koonunga Hill the whole way. Lady Shakespeare and jockey Emma-Jayne Wilson trailed the field down the backstretch. Turning for home, Laragh began to tire allowing Koonunga Hill to take over at the 1/8 pole. C Karma and jockey Jono Jones, who stalked the pace on the rail in fourth early, launched an all-out drive down the center of the course and got up to win by a neck over late-running 46-1 longest shot Freyga, completing the mile in 1:40.74. It was just 3/4 length back to Koonunga Hill third. Favorite Lady Shakespeare came three-wide into the lane when asked by Wilson but lacked a strong closing response, finishing a disappointing sixth. 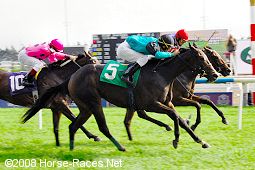 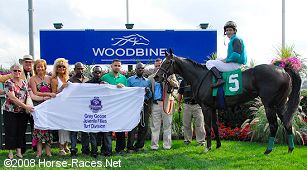 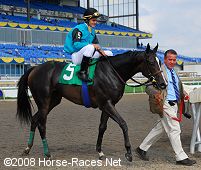 Left: C Karma in the winner's circle. Winning trainer Greg De Gannes said, "For all of those listening from Three Chimneys, Exchange Rate is most definitely my favorite stallion. I always thought she was a high-quality filly. She's a homebred. There's nothing more pleasing (for an owner) then having a homebred jump up and do this. It was a rough trip (when third in the Ontario Debutante last out). Racing luck sometimes is on your side, sometimes not on your side. As it was today, it was on our side."

Right: C Karma heads to the winner's circle after the race. 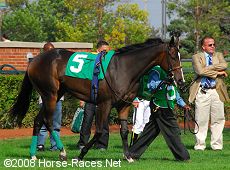 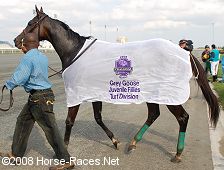 Left: C Karma in the paddock before the race with trainer Gregory de Gannes in the background on the right.

Right: C Karma heads to the barn after the race. C Karma, a Florida-bred owned by Pamela Edel, increased her career earnings to $161,100 and improved her record to two wins from five starts. 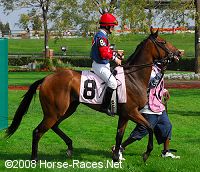 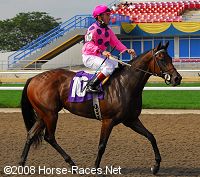 Left: Second place finisher Freyga in the paddock. Her jockey Justin Stein said, "We had a perfect trip. At one point, when the other horses started stopping, I knew we had third. Then, I knew we had second. She just kept plugging away and didn't give up. She might have been 45-1, but I knew she would run better than the odds showed. She ran a good turf race last time out and I expected her to be even better this time and she was."

Right: Third place finisher Koonunga Hill returns after the race. The 13-1 shot stalked the pace in second under regular jockey Constant Montpellier, gained command with a furlong to go but was outfinished by the winner and runner-up, beaten just 3/4 length. The Steve Owens trainee improved her record to 2 wins, 2 seconds, and 2 thirds in 6 starts, earning $177,500 for owner-breeder Empress Stable. 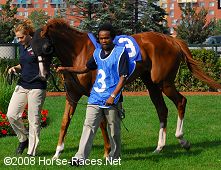 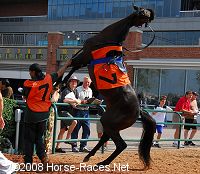 Left: 6th place finisher and beaten favorite Lady Shakespeare in the paddock before the race. The 7-4 favorite trailed the field down the backstretch in ninth, came two wide then three wide to pass tiring horses, but failed to show any significant rally through the stretch, disappointing in sixth. The Roger Attfield-trained daughter of Theatrical's record stands at 1 win in 2 starts with earnings of $36,400 for owner-breeder Charles Fipke.

Right: This was a very skittish group of juvenile fillies, but worst of all was 12-1 shot Panther Strike. She reared up and flipped on her back as she entered the paddock, dangerously close to the steel railings on the outside, then ran loose briefly until she was caught, ironically by trainer Greg De Gannes of eventual winner C Karma, when she reared up again. After this incident she was returned to the indoor saddling area and was allowed to race, finishing 8th. Some of the fillies were spooked by the crowds gathered in and around the walking ring as well as the stiff breeze. You can view the whole sequence of her from rearing to capture here.

On the undercard of the Natalma was the $150,000 Swynford Stakes for 2-year-olds going 7 furlongs on the main Polytrack. Just 6 entered this event, with Silver Deputy Stakes winner Mine That Bird sent off as the 8-5 favorite over 2-1 El Brujo, second in both the Clarendon and the Vandal. 7-2 Bear's Conductor, a 4-length winner of a maiden race last out, completed the top three on the board.

11-1 longest shot Win and Reign was sent to the lead exiting the chute by jockey David Clark, and he set a pace of 23.13 and 46.51 while being stalked by 10-1 Lord of Greatness early. Turning for home, Mine That Bird, who had raced close to the pace in fourth early under jockey Chantal Sutherland, came out four wide for the drive. Win and Reign held the lead to the 1/8 pole getting 3/4 in 1:10.86, but Mine That Bird was closing with every stride and caught him at the line, getting the victory by a neck in 1:23.52. It was another neck back to El Brujo completing the three-horse blanket finish. 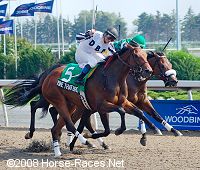 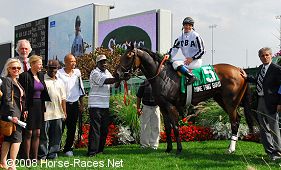 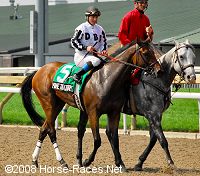 Left: Mine That Bird in the winner's circle. Winning trainer Dave Cotey said, "That was too close. The race didn't set up at all the way we thought. You think there is going to be a lot of speed. All of sudden we're up there just behind them. But Chantal did the right thing. She set him down right and moved at the right time and won the race for us. It was a real ride. He's well-balanced and he's correct. He's got a beautiful, beautiful walk. He's very athletic looking."

Right: Mine That Bird returns after the race. 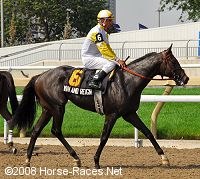 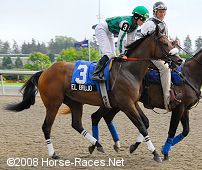 Left: Second place finisher Win and Reign returns after the race. The 11-1 longest shot led at every call under regular rider David Clark, only to be caught in the final strides by the favorite. The Nick Gonzalez trainee improved his record to 1 win and 1 second in 3 starts, earning $126,960 for owner Hillsbrook Farms.