The $1.1 million Meadowlands Pace features the top 3-year-old pacers on the continent. Originally a field of ten qualified for the 32nd running in the three elimination races run a week ago, but Dontloseyourdayjob scratched the day of the race, leaving nine to contest the 1 mile event, one lap of the Meadowlands Racetrack in New Jersey. As expected, the undefeated Somebeachsomewhere was sent off as the 1-10 favorite, exiting an impressive victory in the North America Cup. As a result of his low odds, the rest of the field was at double digits on the toteboard, led by 10-1 second choice Badlands Nitro and 12-1 Art Official. A crowd of 16,907 came out on a very warm night for the festivities.

Art Official, out of post 6, led the field around the clubhouse turn parked out wide early, getting the quarter in 26 seconds, before Somebeachsomewhere and regular driver Paul MacDonell, very wide on the turn, took over the lead on the backstretch. The heavy favorite moved back down to the pylons to save ground on the far turn, getting the half in 51 4/5 and 3/4 in 1:19 1/5, while being pressured by 15-1 Bullville Powerful to his outside and Art Official in behind. At the top of the stretch, Somebeachsomewhere continued to lead, but driver Ron Pierce moved Art Official outside for the drive. Art Official moved up alongside Somebeachsomewhere inside the 1/8 pole and pulled off the upset in the final strides, getting up to win by a neck in a time of 1:47, a new world record for 3-year-old pacers over a 1 mile oval. It was a long 5 1/4 lengths back to 26-1 Share the Delight in third. The time was also just 1/5 second off the all-ages world record. 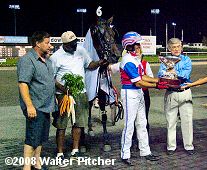 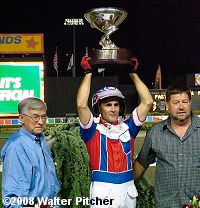 Left: Winning owner Jim Jesk, driver Ron Pierce, and trainer Joe Seekman celebrate with the Meadowlands Pace trophy. Seekman said, "There’s nothing like having confidence and Ronny had all the confidence in the world with the horse. He’s going to go home for a couple weeks off and I think his next race is stakes at Indiana Downs. It hasn’t sunk in yet, but it’s great.”

Right: The trophy presentation for the Meadowlands Pace. 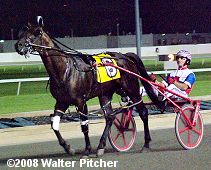 Left: Art Official in the post parade. Winning driver Ron Pierce said, "The horse has a great trainer. I knew with any kind of trip, and if I could find the wood, he’d be that much better this week. I didn’t want Somebeach to get away and someone had to take it to him, and it was up to me and Yannick (driver of Bullville Powerful). I felt confident in the stretch; he swelled up and tipped, the question was to catch Somebeach. I gave him a lick at the 1/16 pole and he took off. I feel mixed emotions because (Somebeachsomewhere) is a great colt, but I had to do my job and the value of my colt just skyrocketed." 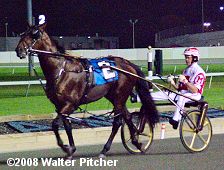 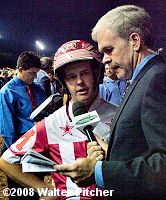 Left: Second place finisher and beaten favorite Somebeachsomewhere in the post parade. His driver Paul MacDonell said, "I took my shot at the half. I thought those two horses where chewed up at the half after 51 [seconds] and a piece. Unfortunately, Yannick [Gingras and Bullville Powerful] never cleared and left me out there a little longer than I wanted to be, but the horse still battled gamely until the end. I've got to give Art Official all the credit in the world. He parked horses past the half in 51 and change and was still around at the wire to live and tell about it. I still had a lot of horse. I figured he'd get me to the wire in a pretty remarkable time and he did and got caught right at the end. I give him and Art Official all the credit."

Right: Paul MacDonell gets interviewed on TV after the race. 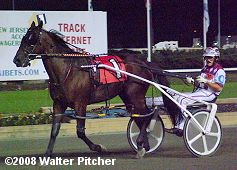 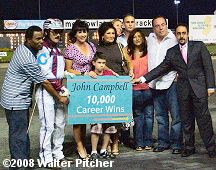