Belmont Park hosted four graded stakes races on Saturday afternoon, two of which featuring the juvenile divisions. Just 5,657 were on hand on a warm cloudy afternoon in New York, with the track rated "good" after some overnight rain. The $250,000 Matron Stakes (G2) featured a field of nine 2-year-old fillies going 7 furlongs on the main track. Heavenly Vision, a 4-length winner of her debut at Saratoga last time out, was sent off as the 2-1 favorite over 7-2 Doremifasollatido, second in the Adirondack at Saratoga after breaking her maiden at Belmont in July. 4-1 Miss Ocean City, a 3 3/4 length debut winner last out, completed the top three on the board.

Jockey John Velazquez sent Miss Ocean City to the front and she set fractions of 22.55 and 46.03 while being stalked by 13-1 Argyle Pink down the backstretch. Turning for home, Miss Ocean City began to tire, while Doremifasollatido and jockey Eibar Coa, fourth early, found room between horses at the top of the stretch and steadily gained on the leaders. Doremifasollatido took over inside the 3/16 pole and opened up late, cruising under the line 2 lengths in front of late-running 9-2 Persistently in 1:24.74. It was a long 7 lengths back to Argyle Pink third, while favorite Heavenly Vision finished fifth. 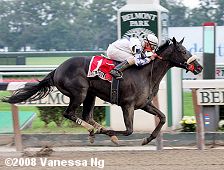 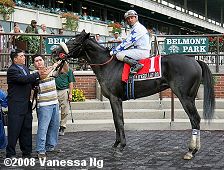 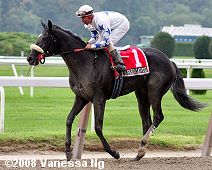 Right: Doremifasollatido in the winner's circle. Winning trainer James Jerkens said, "In her last race, she got into contending position while she was losing ground and got tired late. But she hung on game for second. That was a big effort. I told Eibar today, 'Hopefully she will break good and we can sit there for awhile.' She was up close without any effort. Her rhythm got broken a little bit at the top of the stretch, but she showed a lot of grit. Eibar makes them do that."

Left: Doremifasollatido returns after the race. 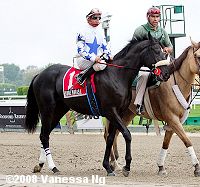 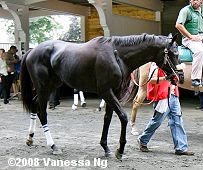 Right: Doremifasollatido in the post parade. Winning jockey Eibar Coa said, "It was supposed to be a fast race. It's about your horse showing up. She showed up today, broke easily and showed ability and heart."

Left: Doremifasollatido in the paddock before the race. 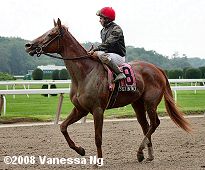 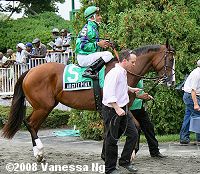 Left: Second place finisher Persistently returns after the race. The 9-2 fourth choice trailed the field early under jockey Alan Garcia, came out 8 wide into the stretch and closed well down the center of the track to get second beaten 2 lengths. The Shug McGaughey trainee improved her record to 1 win, 1 second, and 1 third in 3 starts, earning $93,400 for owner-breeder Phipps Stable.

Right: Third place finisher Argyle Pink heads out to the track before the race. The 13-1 shot pressed the pace three wide under new jockey Cornelio Velasquez, dropped back at the 1/4 pole then came back late to get third beaten 9 lengths. The Eddie Kenneally trainee improved her record to 1 win and 1 third in 2 starts, earning $62,200 for owner John L. Wieczorek. 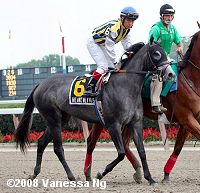 Fifth place finisher and beaten favorite Heavenly Vision in the post parade. The 2-1 favorite raced in midpack for the first half mile under jockey Edgar Prado, came out 5 wide for the drive but failed to improve position, finishing fifth beaten 10 3/4 lengths. The Bob Baffert trainee has 1 win in 2 starts, earning $44,700 for owners George Bolton, Frank A. Bonsal Jr, David DiPietro, and Alan Pesch.


The $250,000 Futurity Stakes (G2) featured a field of seven 2-year-old colts going 7 furlongs on the main track, with the Champagne Stakes and ultimately the Breeders' Cup Juvenile as the target. Charitable Man, exiting an 11 1/2 length romp in his debut last time out, was sent off as the 7-5 favorite over 5-2 Gone Astray, winner of a maiden race at Saratoga last out after finishing third in his debut. 9-2 Girolamo, winner of his debut in his last start, completed the top three on the toteboard.

14-1 High Mesa battled for the lead with 7-1 Kensei and 20-1 longest shot Flying Pegasus down the backstretch through quick fractions of 22.87 and 46.97, while favorite Charitable Man was unhurried near the back of the field. Turning for home, High Mesa tired and dropped back, eventually finishing last, while Charitable Man was hitting his best stride. The favorite came five wide on the turn, closed with a rush on the outside, and took over the lead at the 1/8 pole, getting 3/4 in 1:11.59. Charitable Man easily held off Flying Pegasus late in the stretch to win by a length in 1:24.30 over the good main track. It was another 2 3/4 lengths back to 12-1 late-runner Friesan Fire third. 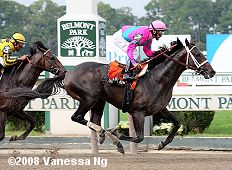 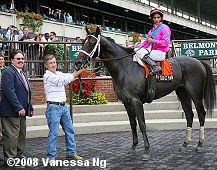 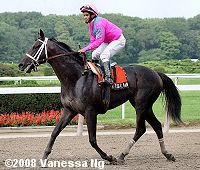 Left: Charitable Man in the winner's circle with trainer Kiaran McLaughlin on the right. McLaughlin said, "We're just very happy that one of them won, and Alan (Garcia) chose the right one. (4th place finisher) Girolamo ran well, too. He kind of had trouble. Charitable Man is a very nice horse with very nice owners. Hopefully, he will have a very bright future. He was a little wide the whole way, which didn't help him. We're looking ahead to the Champagne." 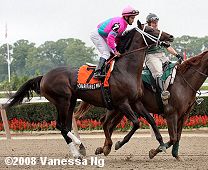 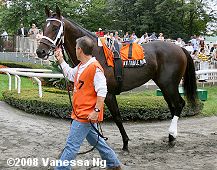 Right: Charitable Man in the paddock before the race. 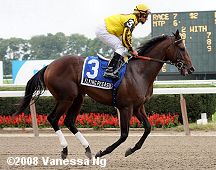 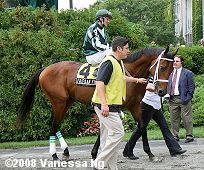 Left: Second place finisher Flying Pegasus in the post parade. The 20-1 longest shot on the board was under a firm hold between pacesetters High Mesa and Kensei early under new jockey Cornelio Velasquez, and stayed on well to hold second place. The Ralph Nicks trainee improved his record to 2 wins and 1 second in 3 starts, earning $105,965 for owner-breeder James C. Spence.

Right: Third place finisher Friesan Fire heads out to the track before the race. The 12-1 shot trailed the field for 6 furlongs under jockey Terry Thompson, then got out in mid stretch and closed well to get third beaten 3 3/4 lengths. The Larry Jones trainee improved his record to 1 win and 1 third in 2 starts, earning $49,000 for owner Vinery Stables.