Along with the two races for the juvenile divisions, there were three other stakes races at Belmont Park on Saturday afternoon. The highlight race of the card was the $250,000 Gazelle Stakes (G1) for 3-year-old fillies going 1 1/8 miles on the main track. Five were originally entered but just 4 broke from the gate after Country Star was a late scratch, with Mother Goose and Coaching Club American Oaks winner Music Note sent off as the 1-20 favorite exiting a runner-up finish in the Alabama. In to challenge the Godolphin Racing homebred included 8-1 second choice Hamsa, second by a nose in an allowance last out, 11-1 third choice Awesome I Am, winner of an allowance after finishing a close third in the Serena's Song, and 17-1 Mega, fifth in an allowance after breaking her maiden.

Awesome I Am and Mega contested the pace out of the chute and down the backstretch through a quarter in 24.56 and a half in 48.18 over the good main track, while favorite Music Note sat just a length and a half behind them in third. On the turn, jockey Javier Castellano asked Music Note for run and got it, as the favorite moved up to take the lead after 3/4 in 1:12.67. Through the stretch, Music Note drew away, cruising under the line 8 1/2 lengths in front of late-running Hamsa in a time of 1:50.20. It was another 9 3/4 lengths back to pacesetter Awesome I Am third, and 31 3/4 more to Mega. 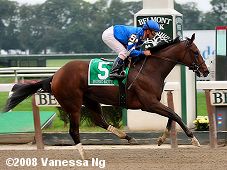 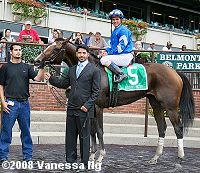 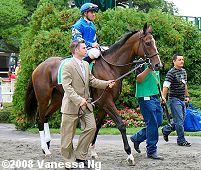 Left: Music Note in the winner's circle with trainer Saeed bin Suroor in front of her. Suroor said, "It was a brilliant result. It was an easy, impressive win. She's a tough filly, one of the best two or three in the country. She's headed to the Breeders' Cup (Ladies Classic)."

Right: Music Note heads out for the track before the race. 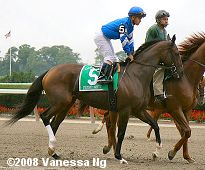 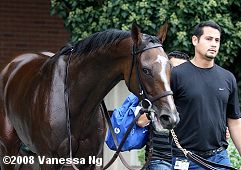 Left: Music Note in the post parade. Winning jockey Javier Castellano said, "There was so much noise, she thought it was ready to go and she hit the gate. The vet checked her out and she was okay. Unfortunately, the other filly (Country Star) flipped all the way to the back and was scratched." He continued, "I had a great post on the outside. She did it the right way today. She was comfortable and relaxed. At the three-eighths pole, she grabbed the bit and she wanted to go. I took care of her today for her next race."

Right: Music Note heads back to the barn after the race. 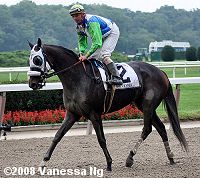 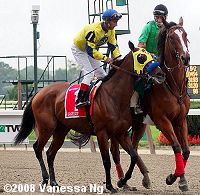 Left: Second place finisher Hamsa returns after the race. The 8-1 second choice trailed along the backstretch under new jockey Eibar Coa, moved up along the inside on the turn to get second, but was no match for Music Note late, finishing second beaten 8 1/2 lengths. The Barclay Tagg trainee improved her record to 2 wins, 2 seconds, and 0 thirds in 6 starts, earning $134,360 for owners Roy and Gretchen Jackson (Lael Stables).

Right: Third place finisher Awesome I Am in the post parade. The 11-1 third choice contested the pace for the first 6 furlongs under regular rider Rajiv Maragh, then steadily dropped back after being passed by Music Note and Hamsa, finishing third beaten 18 1/4 lengths. The John Terranova trainee improved her record to 2 wins, 0 seconds, and 3 thirds in 6 starts, earning $103,772 for owner Sovereign Stable.


The $100,000 Noble Damsel Handicap (G3) featured a field of eight older fillies and mares going 1 mile on the Widener Turf Course. Criminologist was sent off as the 7-5 favorite despite finishing 8th in the Diana and 7th in the Just a Game for her last two starts. In to challenge her included 7-2 second choice Sefroua, making her American debut after winning the Prix de Lieurey at Deauville last time out, and 9-2 third choice Say You Will, fourth in the Locust Grove at Churchill Downs in July.

13-1 Waquoit's Love went to the front soon after the start and she set a pace of 24.44, 49.12, and 1:13.44 over the soft turf course, while as many as 1 1/2 lengths ahead of 8-1 Trouble Maker. Favorite Criminologist sat in fourth early away from traffic on the outside. Entering the stretch, jockey Edgar Prado asked Criminologist for run and got it, as she steadily gained on the pacesetter. Waquoit's Love opened up a 2 1/2 length lead at the 1/8 pole but Criminologist got up to nail her at the line by a head in 1:37.91. It was another 1 3/4 lengths back to late-running Sefroua third. 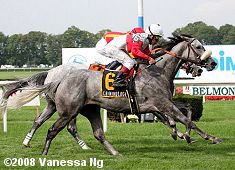 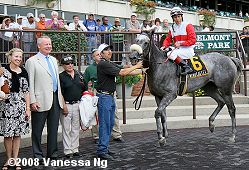 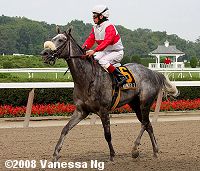 Left: Criminologist in the winner's circle.

Right: Criminologist returns after the race. Winning trainer Shug McGaughey said, "I knew it was a laboring turf course. If she fired, we didn't know if she would be able to get there or not. We didn't know that until the final jump at the wire. I was pleased with the race. The turf course is pretty grueling. She relaxed good today, which had been a problem in a couple of her other races. So, hopefully, we're back on track." 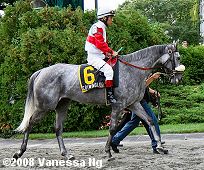 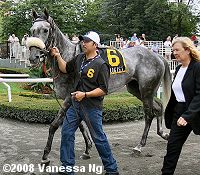 Left: Criminologist heads out for the post parade. Winning jockey Edgar Prado said, "She gave me a nice kick. She was nice and professional. The other horse was very game. It was a great effort from my horse."

Right: Criminologist in the paddock before the race. 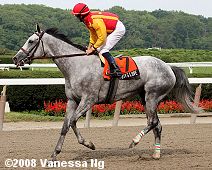 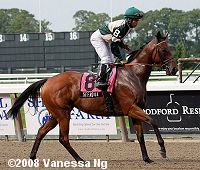 Left: Second place finisher Waquoit's Love returns after the race. The 13-1 shot broke alertly and set the pace under new jockey Garrett Gomez while saving ground on the rail, dug in when challenged by Criminologist but was headed in the final jump. The Timothy Hills trainee improved her record to 4 wins, 5 seconds, and 3 thirds in 19 starts, earning $191,722 for owner-breeder Dennis J. Federico.

Right: Third place finisher Sefroua in the post parade. The 7-2 second choice raced wide in sixth early under new jockey Alan Garcia, then closed willingly on the outside to get up for third. The Jean-Claude Rouget trainee improved her record to 3 wins, 2 seconds, and 2 thirds in 7 starts, earning $135,832 for owner Nelson Radwan.


Kicking off the stakes action on Saturday was the $100,000 Allied Forces Stakes for 3-year-olds. Originally scheduled at 1 1/8 miles on the inner turf, it was switched to the same distance on the main track due to the soft course. 3 of the original 8 entered scratched from the race leaving just 5 to go to post. 3-1 second choice Pascal battled for the lead with 5-1 Atwell down the backstretch through fractions of 25.47, 49.79, and 1:14.02. Atwell tired entering the stretch allowing Pascal to take over the lead for good, drawing clear through the stretch under new jockey Cornelio Velasquez to win by 1 3/4 lengths over late-running 9-10 favorite That'srightofficer in a time of 1:50.79. It was a long 5 1/4 lengths back to 6-1 Slambino third. 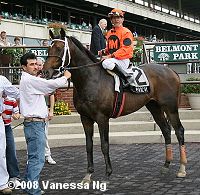 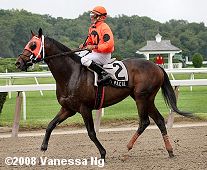 Right: Pascal returns after the race.