The day after Christmas marks opening day for the Santa Anita winter-spring meeting. Overnight rains forced the turf races to be moved to the main track, however the track remained fast with partly cloudy skies and temperatures in the high 50's for the 20,537 fans in attendance at the historic Arcadia oval.

The traditional opening day feature is the $300,000 Runhappy Malibu Stakes (G1) for three-year-old sprinters going 7 furlongs. The race kicks off the Strub Series for newly-turning 4-year-olds, continuing with the San Fernando and the Strub Stakes during the meet. Flightline was sent off as the 2-5 favorite in the field of 7, undefeated in two starts and making his stakes debut. In to challenge him included 4-1 second choice Dr. Schivel, a close second in the Breeders' Cup Sprint (G1) after winning the Bing Crosby (G1) and Santa Anita Sprint Championship (G2), and 6-1 third choice Triple Tap, undefeated in 2 starts and also making his stakes debut. 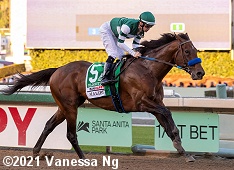 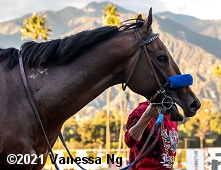 Left: Flightline in the winner's circle. Winning co-owner Terry Finley of West Point Thoroughbreds said, Things are pretty good this is a very special horse and I'd just like to say thank you to John Sadler and the team and to David Ingordo who picked this horse out, and Bill Farish who sold the horse, and Jane Lyon who bred the horse. It is a big team, it is going to be quite the night tonight." Co-owner Bill Farish of Woodford Racing added, "We hoped to win this, but to do this against this kind of field, this was the real class test for him and I think he answered it the way we thought he would."

Right: Flightline heads back to the barn. Winning trainer John Sadler said, "I've been stressing the last 20, 30 or 40 days getting ready for today. The next race is up to the horse. We have to be true to the horse. We will chart the course from there. This horse is so brilliant. This is not an ordinary horse, this is a very special horse. We want to do right by the horse and all other things will fall into place. He was late getting here. He had a foot bruise at Del Mar, so we backed off. After Flavien got off him the last time, he said this horse can go further. He'll go a distance the next time. There is a lot of pressure on you, but it is the pressure you want." 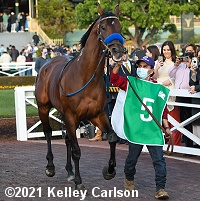 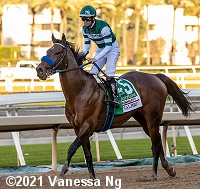 Left: Flightline in the paddock before the race. Winning jockey Flavien Prat said, "I was in cruise control the whole race, galloping freely. He was quite impressive. I wanted to get a good position and get myself into the race. My idea was to get out there running and see what happened. He has been brilliant so far. He really has been quite amazing."

Right: Flightline returns after the race. Co-owner Kosta Hronis said, "It's always great to see a great racehorse stay on the racetrack and run as long as he can. We hope we can see Flightline put up a terrific year." 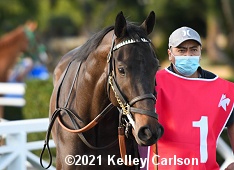 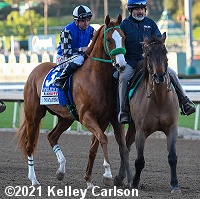 Left: Second place finisher Baby Yoda in the paddock. Jockey Jose Ortiz said, "He broke very well, but I looked to my right passing the five-eighths pole and Flightline was there looking very comfortable. I couldn't go any faster. When I was ready to make my move I did, but Flightline was too good. We were going very fast early, and for Flightline to have that kind of turn of foot later on was very impressive. My horse ran a winning race anywhere else. If Flightline isn't there, I win. He's a freak." 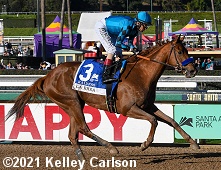 The distaff counterpart to the Malibu is the $300,000 La Brea Stakes (G1) for 3-year-old fillies also sprinting 7 furlongs. Zenyatta Stakes (G2) winner Private Mission was sent off as the 3-5 favorite in the field of 7 off her 11th place finish in the Breeders' Cup Distaff (G1). In to challenge her included 4-1 second choice Missy P., 5th in the Desert Code last out, and 5-1 third choice Livingmybestlife, winner of the Lucky Spell at Los Alamitos and the Seashell at Del Mar.

Jockey Juan Hernandez sent Livingmybestlife to the lead out of the chute through fractions of 22.11 and 44.92 while pressed by 21-1 Brilliant Cut and stalked by 9-1 Kalypso. Turning for home, Livingmybestlife tired as Kalypso inherited the lead through 3/4 in 1:10.92. Kept to task by John Velazquez, Kalypso drew off late to win by 4 3/4 lengths over Brilliant Cut in 1:24.78. It was another 1 1/2 lengths back to Livingmybestlife third, while Private Mission was bumped early, trailed throughout, and finished 6th beaten 7 1/2 lengths. 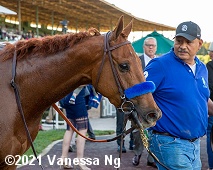 Left: Kalypso in the winner's circle. Winning trainer Bob Baffert said, "We turned her out after that Churchill Downs race (ran 12th). We brought her back and she was fresh. That is what happens when you have two good fillies in the same race. The other didn't run good (Private Mission). She was not running at all. That's not her. Johnny V. got (Kalypso) to relax. She has a tendency to go to fast. She was really relaxed today and she was one happy filly. Grade 1's are hard to come by."

Right: Kalypso heads back to the barn. Winning jockey John Velazquez said, "Bob and I talked about it. We thought there was a lot of speed in the race and we knew she had speed but I didn't want to be in a duel and not have anything to finish with. I told Bob that if she has more speed, then I'm just going to let her go let her be in the lead. I wanted to give her a chance the first part of the race and everything was really easy until I got to the three-eighths pole. I kind of got on her a little bit and she bit into the bridle, so I said, ‘alright we're going good'. At the quarter pole I pulled her to the clear and from then on it was pretty easy." 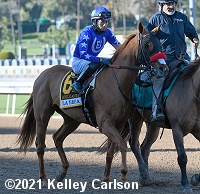 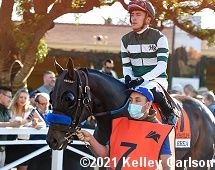 Left: Second place finisher Brilliant Cut in the post parade. Jockey Jose Ortiz said, "She ran a very good race. She broke well and clean and put me into a good position. I was sitting in second the whole time. When we went past the quarter pole, I went after her. I was just trying to break clean. If she was going to give me the lead I was going to take it, but she was chasing hard early on so we sat in second. She ran well, we were second best." 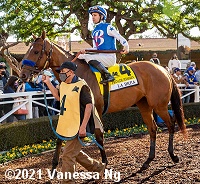 Sixth place finisher and beaten favorite Private Mission in the paddock. The Bob Baffert trainee has a record of 4 wins, 0 seconds, and 0 thirds in 7 starts, earning $257,300 for owner Baoma Corporation. 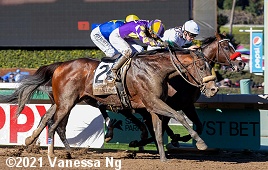 The $200,000 San Antonio Stakes (G2) featured a field of 7 older horses going 1 1/16 miles on the main track in an early prep for the Santa Anita Handicap. Belmont Stakes (G1) runner-up and Pennsylvania Derby (G1) winner Hot Rod Charlie was sent off as the 1-5 favorite in the field of 7 off his 4th place finish in the Breeders' Cup Classic (G1). In to challenge him included 13-2 second choice Eight Rings, third in the Native Diver (G3) after finishing 4th in the Breeders' Cup Dirt Mile (G1), and 7-1 third choice Express Train, third in the Awesome Again Stakes (G1).

Jockey John Velazquez sent Eight Rings to the front first time by through fractions of 23.87, 47.37, and 1:11.89 while pressed by 60-1 Extra Hope and stalked by Hot Rod Charlie. Turning for home Eight Rings continued to lead through 1 mile in 1:37.97, but Express Train, 4th early under Victor Espinoza, came out 3 wide for room and outfinished Hot Rod Charlie to win by a nose in 1:44.82. It was another 1/2 length back to Eight Rings third. 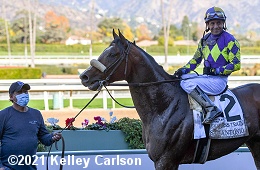 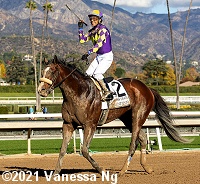 Left: Express Train heads to the winner's circle. Winning jockey Victor Espinoza said, "I didn't want to force him too hard to go outside because I didn't want him to lose his stride. The way he has been playing, I didn't want to discourage him during the race. It was really tight and I think I got out just in time. I was able to follow and move with Hot Rod Charlie. This horse takes a little bit of time at the turn, so I had to start pedaling to start following the other horses. Turning for home and squeezing for the lead is when he really accelerated. At that point I knew my only shot was to calculate him to win right at the wire. Sometimes things go the way we calculate turning for home, and sometimes they don't. Today it worked out and we got it right at the wire."

Right: Express Train returns after the race. Winning owner Lee Searing said, "I kind of thought that he won, but the big move was Victor did a great job of getting him out at exactly the right time. He was ready for Hot Rod Charlie to go a little quicker, but he got him out one second at the right time. The horse was going to finish in a great race, this was a great race. His last two races he did not break well, Victor did a great job because everyone wanted to get in there early and he was just down on the inside. It showed he could eat some dirt today. He's a really good horse when he is a stalker and gets to the outside. Today finally he got it at the end there. This is a nice horse, a really nice horse." 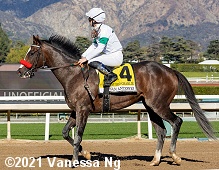 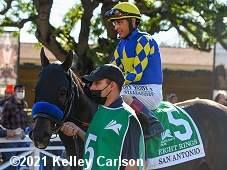 Left: Second place finisher and beaten favorite Hot Rod Charlie returns after the race. Trainer Doug O'Neill said, "We got beat a bob. He ran great. He's fine. We are very optimistic about the next year with him. I'm proud of him and the connections. He ran a great race.". Jockey Flavien Prat added, "It was a good race. I had to keep him in the race because he wasn't traveling super well. He wasn't traveling the way he usually does. I was really pleased with my position, and he made a good move around the quarter pole, but he just couldn't get there in the end."