There were three graded stakes races scheduled to be run on the turf on opening day of the Santa Anita winter-spring meeting, but rain overnight forced the turf races to be moved to the main track, however the track remained fast with partly cloudy skies and temperatures in the high 50's for the 20,537 fans in attendance at the historic Arcadia oval. Due to the surface change, the stakes were initially lowered by one grade level, as will be noted below. After review by the Graded Stakes Committee, the American Oaks and Mathis Mile retained their grades but the San Gabriel was downgraded.

The $300,000 Americans Oaks (G1) is traditionally run at 1 1/4 miles out of the downhill turf chute, but after being moved to the main track by the stewards and downgraded from Grade 1, only 1 scratched out (Eddie's New Dream) leaving a field of 10 three-year-old fillies to go to post. Going Global was sent off as the 4-5 favorite off wins in the Del Mar Oaks (G1) and Goldikova Stakes (G2). In to challenge her included 13-2 second choice Fluffy Socks, winner of the Sands Point (G2) at Belmont, and 7-1 third choice Nicest, third in the Red Carpet Handicap (G3). 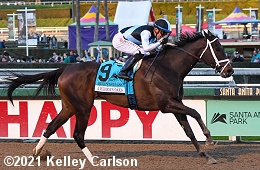 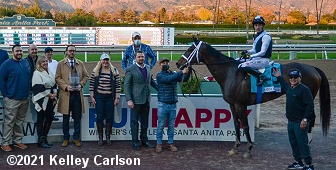 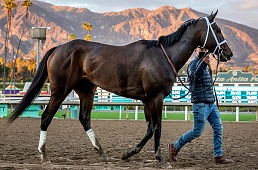 Left: Queen Goddess in the winner's circle. Winning trainer Mike McCarthy said, "I was extremely disappointed when I heard the race was coming off the turf. All four owners decided to give it a shot on the dirt and I can't thank them enough."

Right: Queen Goddess heads back to the barn after the race. Winning jockey Juan Hernandez said, "She's a really nice filly. When you watch a lot of people like today, you just feel different, you feel good and I just wanted to win a race today on opening day. I'd like to thank Michael McCarthy and the owners for the opportunity, I really appreciate it." 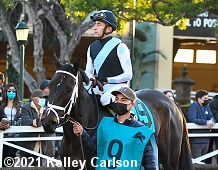 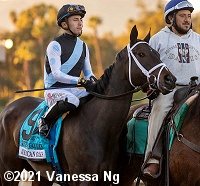 Left: Queen Goddess in the paddock. Hernandez added, "She showed me a lot today. She broke really sharp. She came to run today because out of the gate, I felt that she was trying to run to get the lead and she got comfortable there and (the other horses) let me go. She held on to the lead pretty good. Around the quarter pole when she felt(stablemate Nicest), I actually felt her too, and in listening to the crowd, I could tell the other filly was coming so we started working really hard and she just kept going, she never stopped." 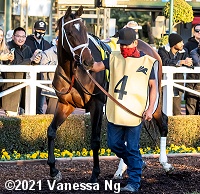 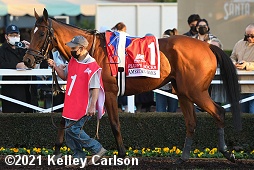 Left: Second place finisher Nicest in the paddock before the race. Trainer Mike McCarthy, who trains the first two finishers said, "We'll see what's next for both these horses."

Right: Third place finisher Fluffy Socks in the paddock. The Chad Brown trainee improved her record to 4 wins, 3 seconds, and 2 thirds in 11 starts, earning $466,880 for owner-breeder Head of Plains Partners. 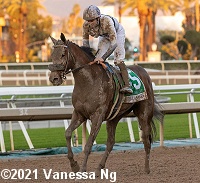 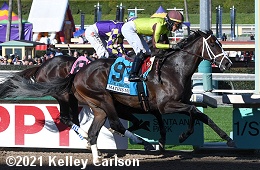 The $200,000 Santa Anita Mathis Mile (G2) featured a field of 7 three-year-olds going 1 mile on the main track (originally scheduled for turf). After Zoffarelli scratched, Hollywood Derby (G1) winner Beyond Brilliant was sent off as the 7-5 favorite in the field of 8 over 11-4 second choice Du Jour, 8th in the Dueling Grounds Derby, and 4-1 third choice Law Professor off an allowance win at Del Mar. 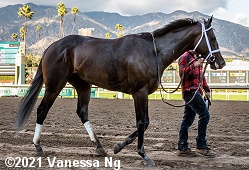 Left: Law Professor in the winner's circle. Winning trainer Mike McCarthy said, "He is a little bit on the difficult side. He hasn't quite totally figured it out yet. I thought his last win at Del Mar was very professional. I was looking forward to running him on the grass today, I also thought about running him on the dirt at Los Alamitos. I thought he broke well here when he broke his maiden, but he really hasn't put it all together yet, when he does, I think it will be very exciting. It's great to have a horse that is as versatile as him, I don't know what it holds for him just yet but after what we saw today we may think about putting a little blinker back on him. We have a lot of options at play, it's very exciting."

Right: Law Professor heads back to the barn. Winning jockey Jose Ortiz said, "I thought he was much better than what he showed. When he made the lead he started wandering around, he didn't give me one hundred percent. I think he's a little bit better than what he showed today. I was showing my rein to change it up and keep his attention. When I did that he responded well, I caught his attention and kept doing that to the wire." 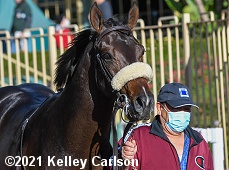 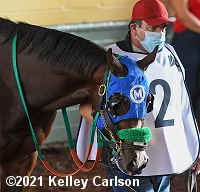 Left: Second place finisher and beaten favorite Beyond Brilliant in the paddock. Jockey Kent Desormeaux said, "The trip was a little quick for my liking, but the horse was very comfortable and he showed that by trying to win. The eventual winner was right behind me all the way. I can't wait for him to run on the grass again. He dug in, he tried to win, and he tried to come again at the end. I was very proud of him."

Shortly after the start of the Santa Anita Mathis Mile. 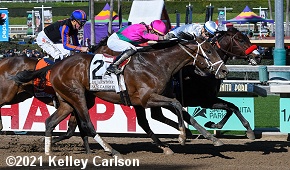 Kicking off the stakes schedule for the meeting was the $200,000 San Gabriel Stakes (G3) for older horses going 1 1/8 miles (originally scheduled for turf as a Grade 2; grade not restored after review). After Hit the Road, Majestic Eagle, and Red Storm Risen all scratched, a short field of just 4 went to post with Friar's Road sent off as the 7-10 favorite off third place finishes in the John Henry Turf Classic (G2) and Hollywood Turf Cup (G2). In to challenge him were 5-2 second choice Ready Soul, 8th in the John Henry before winning an allowance, and two horses both at 5-1, Seabiscuit Handicap (G2) 6th place finisher Bob and Jackie and Seabiscuit third place finisher Indian Peak. Due to the short field there was no show pool.

Jockey Jose Valdivia Jr. sent Bob and Jackie to the lead first time by and he set fractions of 23.75, 49.29, and 1:13.82 while pressed by Ready Soul and stalked by Indian Peak, as Friar's Road trailed just 2 lengths off the pace. Bob and Jackie continued to lead to midstretch through 1 mile in 1:40.05. Friar's Road came out 4 wide for room and rallied but Bob and Jackie held him off to win by a nose in 1:53.51. It was 1/2 a length back to Ready Soul third, and 17 more to Indian Peak last. 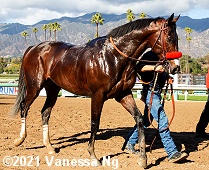 Left: Bob and Jackie heads to the winner's circle. Winning trainer Richard Baltas said, "There wasn't a discussion. We never tried him on the dirt, he has a little pedigree for the dirt even though he looks like a grass horse. We had a couple of good scratches in there and I just said, ‘we had nothing to lose, we need to go.' I've seen this horse dig in before and Jose did a great job down the backside to get him to relax. He kind of throws his head up but he does dig, and he dug in, it was a great win. Now I have to decide if I keep him on the dirt. He's been a grass horse the whole time. With the key scratches, we thought we would give it a try and see if things would go our way."

Right: Bob and Jackie heads back to the barn. Winning jockey Jose Valdivia Jr. said, "We were the speed of the race. He broke well, but I had to use him quite a bit to make him take the lead. Once he did take the lead, he settled beautifully. His ears came up and he was just waiting for company. When I asked him, he was there for me. We worked our way up and then held on. He was kind of waiting around a little bit, but when the horses came to him, he dug in and tried to fight some more. But hat's off to Ritchie and Calvin (Nguyen, owner) for just taking a shot. It was already a short field and it was going to be even shorter so why not." 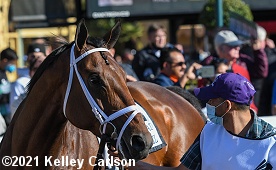 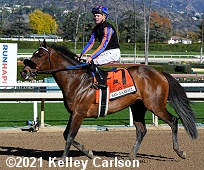 Left: Second place finisher and beaten favorite Friar's Road in the paddock before the race. The Mike McCarthy trainee improved his record to 2 wins, 4 seconds, and 2 thirds in 12 starts, earning $211,500 for owners Mr. and Mrs. William K. Warren Jr.