The feature race on the final weekend of the 2008 Keeneland Spring meeting is the $325,000 Coolmore Lexington Stakes (G2), which is one of the last graded stakes races available for Triple Crown contenders to use to qualify for the Kentucky Derby. A field of 11 three-year-olds went to post in this 1 1/16 mile event over the main Polytrack, before a crowd of 26,072. Tomcito was sent off as the 7-2 favorite exiting a third place finish in the Florida Derby last time out. In to challenge were 4-1 second choice Racecar Rhapsody, fourth in the Lane's End, and 9-2 Atoned, fourth in the Tampa Bay Derby.

17-1 Samba Rooster went to the lead immediately and set a pace of 22.78, 45.21, and 1:09.48 while as many as 4 lengths clear of 20-1 St. Joe stalked in second. Entering the stretch, St. Joe tired and dropped back, as Samba Rooster continued to lead, getting the mile in 1:35.47. 6-1 Behindatthebar, who raced as far back as 10th early, passed horses on the far turn and closed well, catching the pacesetter in the final strides to win by 1 length in 1:42.14. It was just 1/2 a length back to 10-1 Riley Tucker third. Favorite Tomcito raced in 8th early but lacked any late kick, finishing sixth. 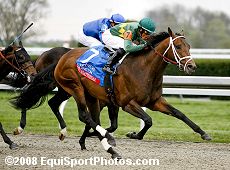 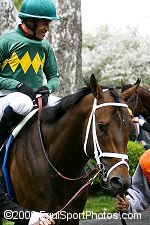 Behindatthebar in the paddock. Winning jockey David Flores said, "When he passed those horses, he wanted to lug in and stay with the horses but I just kind of let him gallop out. It doesn't look like the distance is going to be a problem."

Winning trainer Todd Pletcher said, "We were impressed by this horse obviously not only today but by the way he ran in California, and David's been really high on him. Of course, we were concerned about coming back in 16 days but we knew he liked the synthetic surface so we figured we'd give it a shot." 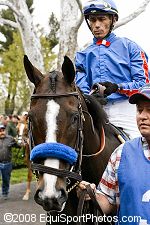 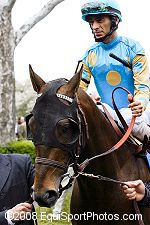 Left: Second place finisher Samba Rooster in the paddock. Samba Rooster sprinted clear and set a fast pace just off the rail under Garrett Gomez, leading up to the 1/16 pole. The Bob Baffert trainee improved his record to 1 win, 3 seconds, and 3 thirds in 6 starts for owners Lanni Family Trust and Mercedes Stable.

Right: Third place finisher Riley Tucker in the paddock. Riley Tucker stalked the pace in 3rd most of the way around under John Velazquez, moved up to second at the 1/8 pole but hung late. The Bill Mott trainee improved his record to 1 win, 3 seconds, and 2 thirds in 7 starts for owner Zayat Stables LLC. 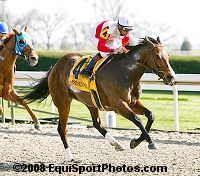 Friday's feature was the $125,000 Doubledogdare Stakes (G3) for older fillies and mares going 1 1/16 miles on the main track. 9-1 Carriage Trail battled for the lead with 12-1 Marquee Delivery through slow fractions of 25.27 and 49.04. On the far turn, Marquee Delivery dropped back as Carriage Trail opened up a 1 1/2 length lead into the stretch. 10-1 Say You Will put in a mild bid but was no match for Carriage Trail, who cruised to a 1 1/4 length victory in gate-to-wire style in 1:42.51. It was just 1/2 a length back to 5-2 second choice Indescribable third, while even-money favorite Panty Raid, who stalked the pacesetters early, tired badly in the stretch and finished last.
Results Chart from DRF. 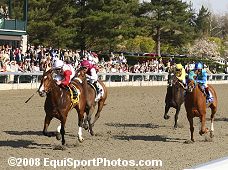 Head-on view of the finish of the Doubledogdare Stakes with winner Carriage Trail out front followed by Say You Will, Indescribable, and Meribel. Winning jockey Kent Desormeaux said, "This filly started running about the mile pole. It wasn't that much of a theft from there; she had to be a racehorse. She put them away and regained the lead. When you see us quickening in the replay at the half-mile pole, she actually was able to get a second breather. When she cornered for home, she just took flight and started reaching for the wire." 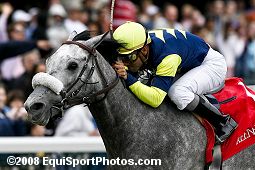 Winning jockey Shaun Bridgmohan said, "He's one of those horses that always makes a nice run at the end. Thanks to Malcolm (trainer Pierce) he told me to get him to the outside when I go to make that move, and it made all the difference in the world." 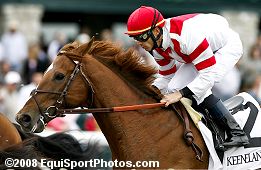 Second place finisher Go Between after the finish. Garrett Gomez aboard beaten favorite and runner-up Go Between said, "When (Sterwins) on the outside opened up on him, his resistance just fell through. But he's had a couple of tough races and traveled across the country. So he ran okay." 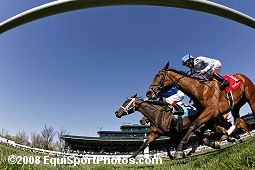 Wednesday's feature race was the $125,000 Appalachian Stakes (G3) for 3-year-old fillies going 1 mile on the turf. 48-1 Mrs. Petoski set a slow early pace of 24.54, 49.49, and 1:14.30 while being stalked by 3-1 favorite I Lost My Choo down the backstretch. Entering the stretch, 5-1 Alwajeeha, 6th early, came out four wide to take over the lead at the 1/16 pole and was all out to hold off the late rally of 9-2 second choice Sweepstake, who in turn was just a nose ahead of third place finisher I Lost My Choo in a three-horse photo.
Results Chart from DRF.

Neal McLaughlin, assistant and brother to winning trainer Kiaran McLaughlin, said, "She's a super filly. I want to congratulate Rick Nichols (VP of Shadwell Stable) for talking to Kiaran. We decided to scratch her out of a race last week and run in the stakes today. He was right. She's a stakes filly. We're going to have a lot of fun with her this year." 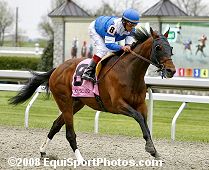 Winning jockey Edgar Prado said, "I just wanted to keep him happy the first part of the race. He was very comfortable galloping along. I just wanted to have something left over for the finish." 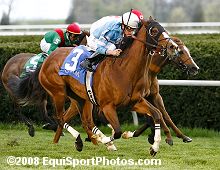 Also on Saturday, the $100,000 Giant's Causeway Stakes featured a field of nine older fillies and mares sprinting 5 1/2 furlongs on the turf. 8-1 Just For Keeps sprinted clear down the backstretch, opening up a 2 length advantage while setting a fast pace of 22.09 and 45.16. Turning for home, she continued to lead by 5-2 second choice Danceroftherealm, 7th early, came out 3 wide for the drive and closed with a rush to nail the pacesetter at the line by 1/2 a length in 1:03.33 over the firm course. It was just a neck back to 11-1 Kindling in third. Just For Keeps was disqualified and placed fifth for interference in the stretch.
Results Chart from DRF. 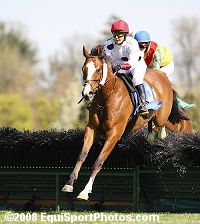 On Thursday, a field of six older horses contested the $150,000 Royal Chase for the Sport of Kings (G1),a 2 1/2 mile trip over national fences. 2-1 favorite Sweet Shani led the way, opening up by as much as nine lengths over the first 2 3/8 miles. However, in the final furlong, 5-2 second choice Sovereign Duty, who raced in second the whole way, moved up to challenge, drawing even with the favorite at the 1/16 pole, then dug in late to prevail by a neck in 4:58.13 over the firm course. It was another 3 lengths back to 7-2 third choice Best Attack third. 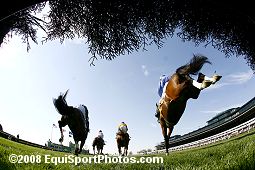 Winning jockey Danielle Hodsdon said, "He's very, very tough that way. He won his last race the same way. If he gets to the last fence, he can lock on to the horse in front of him, and he is not going to quit until he gets past." Trainer Jonathan Sheppard added, "It was a tremendous finish. I think the fans got a big kick out of it."

Right: A view of one of the jumps in the Royal Chase from under one of the hurdles.