The $500,000 Lane's End Stakes (G2) is the most prestigious race at the Turfway Park winter-spring meeting, and is a major prep race for the Kentucky Derby and the Triple Crown. Racing conditions were ideal, with mostly sunny skies and temperatures in the 50's. A maximum field of 12 three-year-olds contested this 1 1/8 mile trip over the Polytrack, with West Side Bernie sent off as the 2-1 favorite, exiting a third place finish in the Holy Bull at Gulfstream Park. In to challenge him included 5-2 second choice Bittel Road, shipping in from California where he was fourth in both the Robert B. Lewis and the CashCall Futurity, and 6-1 third choice Jack Spratt, 8th in the Fountain of Youth on dirt at Gulfstream after winning the Dania Beach on the turf.

33-1 shot Orthodox was sent to the front by jockey Jesus Castanon, and he set an uncontested pace of 23.71, 47.84, and 1:12.43 while as many as 2 1/2 lengths clear of 18-1 Proceed Bee, who in turn was as many as 3 lengths ahead of the rest of the field. Orthodox tired after 7 furlongs, fading to eventually finish 11th, allowing Proceed Bee to take over the lead in mid stretch. 9-1 Hold Me Back, who was 11th down the backstretch after a slow start, split horses on the turn and came 5 wide into the stretch for the drive. Under urging by jockey Kent Desormeaux, Hold Me Back took over the lead at the 1/16 pole and drew away to win by 1 3/4 lengths over 25-1 Flying Private in 1:49.63 over the fast Polytrack. It was another 4 lengths back to Proceed Bee in third. Favorite West Side Bernie raced back in seventh early, saving ground around both turns, but showed no rally late to finish a disappointing sixth.

Also on the card was Bourbonette Oaks, a Kentucky Oaks preps for the 3-year-old fillies, and the Queen Stakes for distaff sprinters. 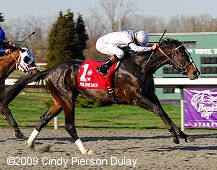 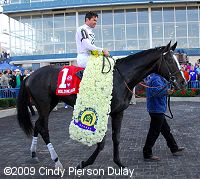 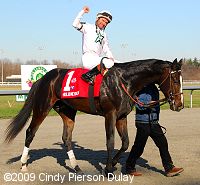 Left: Hold Me Back in the winner's circle. Doug Cauthen, president of winning owner WinStar Farm said, "This was a $500,000 race and it gave us graded earning if we want to dream big and we're dreaming big. He's really strengthened and matured since last year. Kent rode a great race. He has that long stride and just kept going. The credit really goes to (Trainer) Bill (Mott) and the horse."

Right: Kent Desormeaux celebrates aboard Hold Me Back. 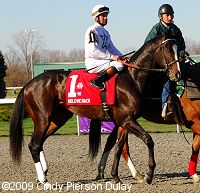 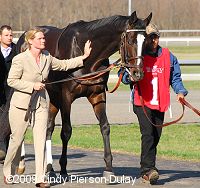 Left: Hold Me Back in the post parade. Winning jockey Kent Desormeaux said, "I thought I was hopelessly beaten the second the doors opened. He just stood there and it worked out really well in the end because closers perform so much better on (Polytrack). After a fearful start he carried me around the racetrack in great fashion, strong, in the bridle, continued to move forward, and I allowed him to do that passing the 1/2 mile pole and just collected the frontrunners continually until we made the lead. Bittel Road was struggling down the backside so I just peeled out from behind him and just went about my own business. He just powered for the wire, full of energy."

Right: Hold Me Back heads into the paddock before the race. 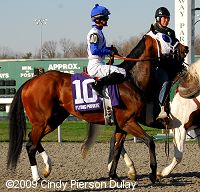 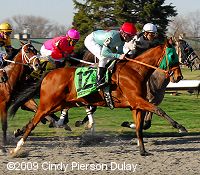 Left: Second place finisher Flying Private in the post parade. His jockey Israel Ocampo said, "I got a perfect trip. I settled down exactly where I wanted to be down the backside. For a second I thought I was going to get the job done, but that other horse came flying. I switched to the left hand stick when I heard him coming, but he just passed by me. I have no excuse. I told Wayne (Lukas, trainer) this horse is getting better and better. He's definitely improving. He's shown he can do it sprinting and running long and on Polytrack too."

Right: Third place finisher Proceed Bee as they pass by shortly after the start. His trainer Terry Gestes said, "I thought he ran good. We really didn't want to be up that close. We just wanted to get a good position, but it seemed like nobody was sending. Everybody took back at the start, so that put us real close off the lead. It seemed like they were running off the pace a little stronger. The colt relaxed. He did everything fine." His jockey Rodney Prescott added, "I had a pretty good trip from the outside. He broke well enough and we're able to save plenty of ground. We didn't have to work to get position. Around the turn, he got out a little but he was still controllable. He ran his eyeballs out. He just got out-footed in the last part." 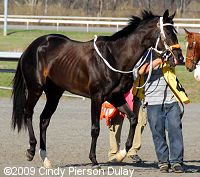 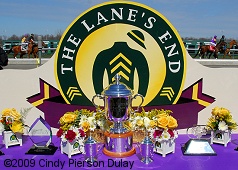 Left: Sixth place finisher and beaten favorite West Side Bernie enters the paddock before the race. His trainer Kelly Breen said, "We tried to push him a little bit early (because of the way speed was playing) and the jockey (Edgar Prado) said he sort of resented it. We'll put our heads together and see what we're going to do."

Right: The trophies for the Lane's End Stakes. 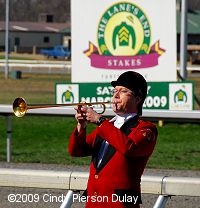 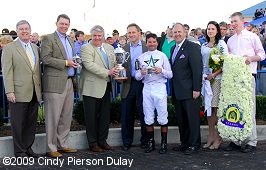 Left: The Call to the Post at Turfway Park on Lane's End Day.

Right: The trophy presentation for the Lane's End Stakes. WinStar Farm vice president Elliott Walden said, "The Derby is definitely our plan, but we'll let the horse and Bill tell us if that is the right place. Our goal is the Derby every year. He's three for three on the synthetics, so that's why we thought of this race to bring him back. He just didn't show up in his last race in the Remsen. He was all legs and bones. I think he's probably put on 150 pounds since then. He's a bigger horse and running with a purpose now. I would think we'd probably go straight into the Derby, but the Blue Grass is also a nice race to win." 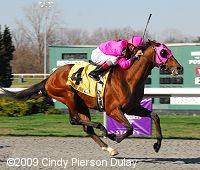 Three-year-olds nominated for the Lane's End looking for an easier spot ran in the 1 1/16 mile, $100,000 Rushaway Stakes on the undercard just before the feature. No Inflation was sent off as the 2-1 favorite in the field of 8, exiting an allowance win on the turf at Tampa Bay. Fitzaslew, second in a Gulfstream allowance last out was the 5-2 second choice over 3-1 maiden winner Ziegfield.

15-1 shot Ninth Client showed early speed, leading the field through a quarter of 24.23 while being challenged by Fitzaslew and 67-1 longest shot Sundays Baby Grand on the turn. Sundays Baby Grand took over the lead down the backstretch through a half of 48.54, but Fitzaslew took over midway around the far turn through 3/4 in 1:12.70. No Inflation, 5th early, came out four wide into the lane to take over the lead in mid-stretch, but faltered in the final furlong. 7-1 Cliffy's Future, who was last early, closed down the center of the track to win going away by 2 1/2 lengths over late-running Ziegfield in 1:44.38. It was just a head back to 26-1 Toccet Rocket third.
Results Chart 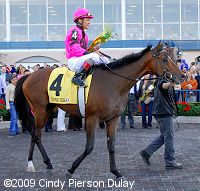 Cliffy's Future in the winner's circle. Winning trainer Darrin Miller said, "Coming in, we were really confident. He was a private purchase and I didn't know a lot about him going into the Sam F. Davis. In hindsight, I wish I had asked more questions, but that race really taught me a lot and I was really confident coming in to this race. I was really concerned about how he would take to synthetics because his race last year at Keeneland wasn't that good. He did train very well over this track. We had no plans coming into this race. We'll take a look at either the Blue Grass or Lexington now."

Winning jockey Jesus Castanon said, "I had a great trip. I've been watching the earlier races and seeing how the track was playing. At the 1/2 mile pole, he just took off. He really took to the track well. I didn't use everything in him so there's something left for the future. I know there's a lot left in the tank. 1 1/4 miles should be no problem for him." 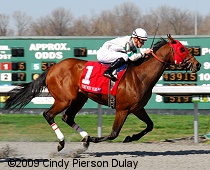 A field of 8 three-year-olds sprinted 6 furlongs in the $50,000 Hansel Stakes. Jockey Julien Leparoux sent 7-1 shot Turfiste to the lead exiting the chute and he set a quick pace of 21.55 and 44.57 while being stalked by 5-1 Music City and 3-2 favorite King Puma. Turning for home, Music City tired and faded from contention, as Turfiste opened up a 2 length advantage over King Puma in mid stretch, getting 5/8 in 57.06. King Puma closed through the final furlong but was no match for Turfiste who held him off by a length in 1:10.10. It was another 1 3/4 lengths back to 15-1 He Ain't Right in third.
Results Chart 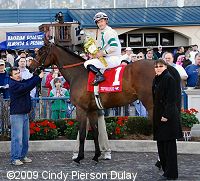 Turfiste in the winner's circle. Winning jockey Julien Leparoux said, "He had the speed to be put into the race. We were right in front the whole time. He was a little rank, but he kept on going. (King Puma) came at me late, but he didn't even pass me after the wire."

On to the Bourbonette Oaks and the Queen Stakes