The distaff counterpart to the Lane's End Stakes is the $150,000 Bourbonette Oaks (G3) for 3-year-old fillies prepping for the Kentucky Oaks. A field of 10 faced the starter in this 1 mile Polytrack test, with Ocala Breeders' Sale Championship winner Fitz Just Right sent off as the 7-5 favorite over 7-2 second choice and local hope Instrumentalist, undefeated in two starts. 8-1 Step Out Smartly, seventh in the Davona Dale after winning the Gowell, completed the top three on the toteboard.

Instrumentalist and Fitz Just Right battled for the lead around the clubhouse turn and down the backstretch through fractions of 24.13 and 47.97 over the fast Polytrack, with 10-1 Foxy Bailey stalking the leaders in third early. The pace battle continued to the top of the stretch, through 3/4 in 1:12.09, but 9-1 Hot Cha Cha, back in 8th early, circled the field on the turn and took over at the 3/16 pole. Hot Cha Cha drew away impressively through the stretch to win by 6 lengths over Fitz Just Right in 1:37.22. It was a three-horse photo for second, with favorite Fitz Just Right taking the place spot by a head over Instrumentalist, by a nose over fourth place finisher 9-1 Walloon. 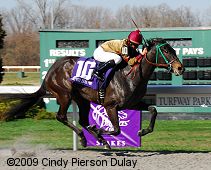 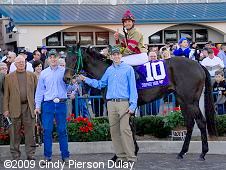 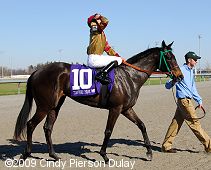 Left: Hot Cha Cha in the winner's circle. Her trainer Philip Sims said, "We decided to take a shot. She ran so well last time that I told (owner) Mr. McMakin that we should take a chance here. Her last race was her first time around two turns and she loved it. She has the pedigree for it. The race just set up perfect for us with the speed and the 10 hole. We were happy when we got that." 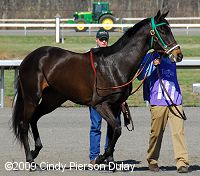 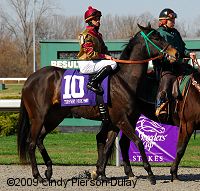 Right: Hot Cha Cha heads into the paddock before the race. When asked about the Kentucky Oaks trainer Philip Sims said, "It's just too soon. It's a long summer. There are races like the Arlington Oaks, which is on the Polytrack. I think that's where she needs to be and maybe turf." 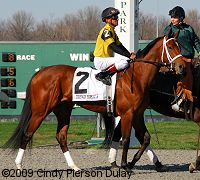 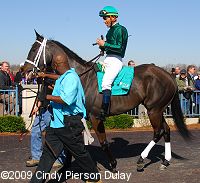 Left: Second place finisher and beaten favorite Fitz Just Right in the post parade. Her jockey Cornelio Velasquez said, "She ran ok. She got a little tired the last part of the race. That other filly went by me pretty fast. She ran a very good race. I have no excuses, that other filly just beat us."

Right: Third place finisher Instrumentalist in the paddock before the race. Her trainer Thomas Drury Jr. said, "I'm just thrilled. Garrett (Gomez) said she was a little sharp, a little on the bridle, but she settled in, and I think she's going to be just fine. We'll try to find something at Keeneland, maybe a little softer company. As much as she looks like she has to be in front on paper, we've covered up a few times in the morning and I figured she'd rate. The first time around two turns, I just couldn't be happier with her." 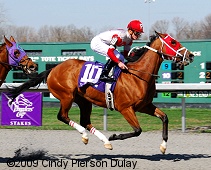 Kicking off the stakes action on Saturday afternoon was the $50,000 Queen Stakes for older fillies and mares sprinting 6 furlongs. 2-1 favorite Just for Keeps set the pace on the inside a length in front of 8-1 Mrs. Petoski and 17-1 Natalicat through fractions of 22.59 and 45.58. Entering the stretch, jockey Julien Leparoux asked her to open up and she pulled away to a 1 1/2 length advantage after 5/8 in 57.49. 9-1 Proud Heiress, seventh early, came out five wide into the lane and closed with a rush but Just for Keeps held her off in the final 1/16 to win by 3/4 length in 1:10.41. It was another 2 3/4 lengths back to Mrs. Petoski third.
Results Chart

Winning jockey Julien Leparoux said, "She won easy. She was trying to get out at the 1/16 pole. I'm not sure why. I think she was just goofing around but it was nothing bad. I had the best post, I had the outside, I had speed, all that made it easier." Trainer Mike Maker added, "Her best asset is her speed and we let her use it today. She has a habit of ducking in and it may have cost her a race or two, but fortunately we didn't have to worry about that today."

On to the Lane's End Stakes, the Rushaway, and the Hansel Stakes