The $500,000 Lane's End Stakes (G2) is the most prestigious race at the Turfway Park winter-spring meeting, and is a major prep race for the Kentucky Derby and the Triple Crown. A crowd of 18,680 was on hand but mostly stayed indoors, as horses and riders faced brisk winds and temperatures in the mid 30's under overcast conditions. A field of eleven 3-year-olds contested this 1 1/8 mile trip over the Polytrack, with Ocala Breeders' Stakes winner Halo Najib sent off as the 3-1 favorite, coming off a sixth place finish in the Fountain of Youth at Gulfstream Park last time out. Racecar Rhapsody, fourth in the Delta Jackpot in his last start, was the 7-2 second choice over 4-1 third choice Adriano, who was a well-beaten ninth in the Fountain of Youth after wining an allowance race on the turf.

21-1 shot Duke of de Buqe battled for the lead with 99-1 longshot Rich Young Ruler first time past the stands and around the clubhouse turn, going 1/4 in 23.03 and 1/2 in 47.18. Duke of de Buqe faded badly midway down the backstretch allowing Rich Young Ruler to lead the field into the far turn, getting 3/4 in 1:12.57. Jockey Edgar Prado aboard Adriano, who had stalked the lead pair the whole way in third out of trouble wide throughout, made his move entering the stretch. Halo Najib, seventh early, also put in a rally on the turn. However, Adriano had gotten the jump on the favorite, and opened up a 2 length lead in midstretch after a mile in 1:37.87, widening his advantage in the final furlong to get the victory by 2 1/2 lengths in a time of 1:50.20. It was just 3/4 lengths back from Halo Najib to late-running 7-1 Medjool in third.

Also on the card was Bourbonette Breeders' Cup Stakes, a Kentucky Oaks preps for the 3-year-old fillies, and the Queen Stakes for distaff sprinters. 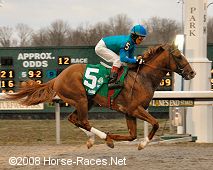 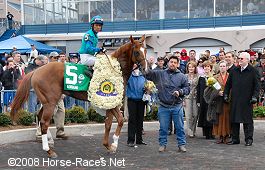 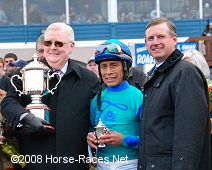 Left: Adriano in the winner's circle. His jockey Edgar Prado said, "I was very impressed with his win on the turf one race before his last (Jan. 11). I know if horses handle the turf well, they will handle the Polytrack. I wanted to be in a tracking position and I was happy almost every step of the way. He put me in a great position at the eighth pole and every time I called on him, he responded."

Right: Bill Farish (right) of Lane's End Farm presents the trophies to owner Donald Adams and jockey Edgar Prado. Adams said, "This is a very proud moment. We've been in the business a long time and we haven't had major success. Days like this make up for the lean years. He's a mid-May foal. He's not even 3 years old. He's very, very big and he's just starting to grow into himself. He has that stride that just eats up the ground. Edgar rode a beautiful race." 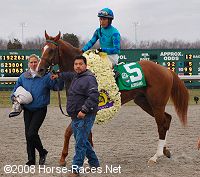 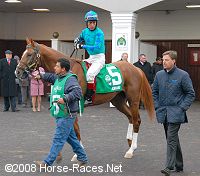 Left: Adrian parades with his flowers after the race.

Right: Adriano in the paddock with trainer H. Graham Motion (right). Motion said, "I thought he was extremely impressive. Edgar gave him a beautiful ride. We had to stay a little bit closer because you didn't want to come from off the pace today. I thought that played right into our hands, because I know at that pace he can go all day. Turning for home I gave him a huge chance. I knew 1 1/8 miles was well within his reach. The Lexington is something we will definitely consider. The horse showed that on his day he can be brilliant. I thought another key was that he was very good in the paddock. He's very hot-blooded. In the Fountain of Youth, he kind of fell apart that day. The fact that he was good today made a big difference." 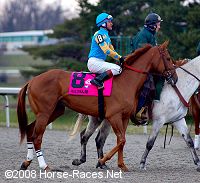 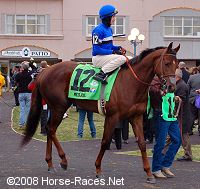 Left: Second place finisher and beaten favorite Halo Najib in the post parade. His trainer Dale Romans said, "My horse ran his race. He had a little rough trip around the turn but I was real pleased with his effort. He split horses, he was in the middle of horses all the way. They were bouncing him around on both sides, but he responded when Kent called on him. He just didn't get there. I don't know where he will go next. We'll talk about that tonight." His jockey Kent Desormeaux said, "He gave me a perfect ride. Dale (Romans) trained him to the max, but we ran into a good one. He laid his body down today."

Right: Third place finisher Medjool in the paddock. His trainer David Hofmans said, "Look like he didn't have much trouble. He didn't stop, that other horse just opened up and we couldn't catch him. I'm very pleased with his effort. I thought he ran well." His jockey Michael Baze said, "He has a tendency of throwing his head up when he gets too much kickback. The kickback was kind of hard. He (trainer David Hofmans) said, 'If you have to sit out a little bit, who cares.' Other than that, my trip was clean. He was inching up every step of the way." 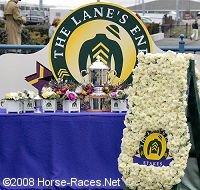 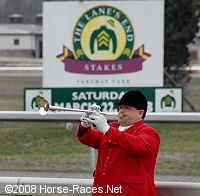 Left: The trophies and flowers for the Lane's End Stakes.

Right: The Call to the Post with bugler Steve Buttleman at Turfway Park on Lane's End Day. 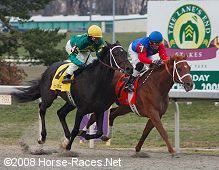 The $100,000 Rushaway Stakes immediately before the Lane's End also features 3-year-olds, but traveling the shorter distance of 1 1/16 miles. Miner's Claim, undefeated in two starts and making his stakes debut, was the 2-1 favorite over 3-1 second choice Icabad Crane, winner of an allowance race at Aqueduct last out. Big Glen, winner of the WEBN Stakes but fourth in the John Battaglia Memorial last out, was the 7-2 third choice.

Miner's Claim went for the early lead under regular rider Patrick Husbands, getting fractions of 24.66, 49.12, and 1:13.68 while being challenged by 36-1 outsider Cape of Storms and Icabad Crane. Cape of Storms moved up alongside the favorite at the top of the stretch and gained a brief lead. Big Glen, who was unhurried in sixth early, moved down to the inside for room. Cape of Storms tired badly at the 1/16 pole as Big Glen passed Miner's Claim in the final strides to prevail by a neck in 1:44.55. It was a long 3 lengths back from Miner's Claim to Icabad Crane third.
Results Chart 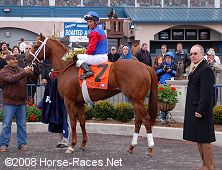 Big Glen in the winner's circle with trainer Frank Brothers on the right. Brothers said, "He had a good trip. He's been a pretty unlucky colt in his last three or four races. He just hasn't had the best of trips. Today he had a very good trip and showed guts to get there. He got the trip and that's what made the difference. He saved the ground. This horse is a hard trier. I don't know what will be next. He's not Derby nominated. We may take a look at the Lexington."

His jockey Rene Douglas said, "This horse proved today that he's a very good horse. He's getting better with every race. I watched his races and noticed that when he gets in front, he tries to pull himself up a little bit, so I took my time. So when I made my move, I tried to time it just right, and at the 1/16 pole I saw (Miner's Claim) was going to come back, so I think we timed it perfectly." 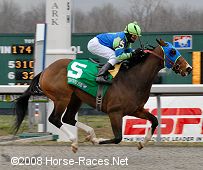 The first of three stakes races on Saturday for 3-year-olds was the $50,000 Hansel Stakes, a 6 furlong sprint. 4-1 fourth choice Mitigation sat third behind pacesetter Little Nick down the backstretch through a quarter in 22.21, then challenged for the lead out five wide, taking over at the top of the lane. Through the stretch, 5-2 third choice U.S. Cavalry put in a rally but was no match for Mitigation, who drew off to a 3 1/4 length win in 1:10.03. It was just a head back to 2-1 favorite Stormin Yank third.
Results Chart 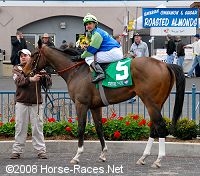 Mitigation in the winner's circle. Winning trainer Paul McGee said, "He was very impressive, won easier than I thought he would. He's three for three since having been gelded and the addition of blinkers. Orlando told me he thought he'd be stalking the leaders. As it turns out, he was right. We figured to be laying where we were and it panned out perfectly. We'll find something at Keeneland for him next."

Winning jockey Orlando Mojica said, "The trainer told me, 'You've ridden him twice already, so you know what to do.' When I saw two horses going head to head, I asked him to relax and get behind them and when we turned for home I told him to go and he went."