The second feature race on the undercard of the Lane's End Stakes at Turfway Park is the $150,000 Bourbonette Oaks (G3). A field of eight 3-year-old fillies went to post in this 1 mile feature around two turns on Polytrack. A to the Croft was sent off as the 6-5 favorite, making her first start since finishing 9th in the Breeders' Cup Juvenile Fillies after two straight runner-up finishes in Grade 1 company. Clearly Foxy, sixth in the Juvenile Fillies last out, was the 7-2 second choice over 5-1 Valentine Fever, winner of the two local preps for this race, the Cincinnati Trophy in January and the Valdale in February.

12-1 shot Love Buzz led the field around the clubhouse turn and into the backstretch through a quarter in 24.18 and a half in 47.69 while being stalked by 14-1 Lovers Spat and 8-1 Maren's Meadow. After 5 furlongs Love Buzz tired badly and dropped from contention to eventually finish last, as Maren's Meadow took over the lead, getting 3/4 in 1:12.27. Maren's Meadow opened up a 2 length advantage in mid stretch after 7 furlongs in 1:25.09, and easily held off the late challenge of Valentine Fever to win by 1 1/4 lengths in a time of 1:38.15. It was another 1 1/2 lengths back to favorite A to the Croft, who raced in seventh early but did not have enough left for the stretch run. 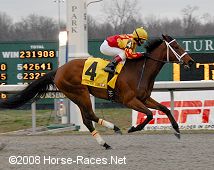 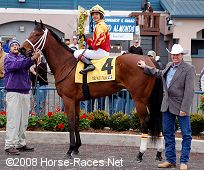 Maren's Meadow in the winner's circle with trainer Larry Jones on the left. Jones said, "She has been training very well. Since we started putting her around two turns she's been a different horse. If you look at her, she just looks like a 2-turn horse. She had the bad luck (was sponged at Delaware Park) but she's over all that. She took to the Polytrack very well. She's a Canadian-bred, so we had several reasons for wanting to try her here. I knew after two days of training at Keeneland she would handle the surface. I was on her myself. We'll probably keep her here through the Black Eyed Susan and look at going to Woodbine after that with her. We'll probably stay away from our other two who are on the (Kentucky) Oaks path (Proud Spell and Eight Belles)." 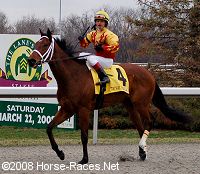 Maren's Meadow returns after the race. Her jockey Gabriel Saez said, "Larry (Jones) said Love Buzz would probably go to the lead and to sit behind her. I stayed 2 to 3 lengths back and off the rail. Larry also said when I wanted to go with her, just go, and that's exactly the way it turned out. She ran beautifully." 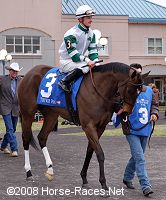 Her jockey Julien Leparoux said, "We got a good trip sitting behind the leaders comfortably, and I thought we were going to get to the winner at the 1/8 pole but she kept on going." 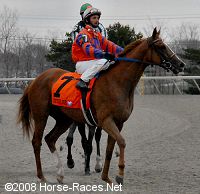 Third place finisher and beaten favorite A to the Croft returns after the race. Her trainer Ken McPeek said, "Anytime you hit the board in a graded stakes race, it's nice. She's a good filly. We're going to win some big ones with her. I thought she was struggling over the racetrack a little bit, but we hadn't trained over the Poly all winter. Robby said he was surprised he was as far back as he was. I'm not sure where we will run her back. We'll see how she comes out of it."

Her jockey Robby Albarado said, "She ran well. She got a little tired. We were a little farther back than I wanted to be in the first part of it, but you can't rush up the field off a layoff. And this was a nice bunch, too." 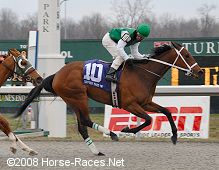 The first stakes race on Lane's End day was the $50,000 Queen Stakes for older fillies and mares sprinting 6 furlongs on Polytrack. Gem Sleuth, an allowance winner at Gulfstream last out, was sent off as the 5-2 favorite in the field of 10. However, 7-1 shot Pola's Place was quickest out of the gate and was allowed an uncontested 1 1/2 length lead down the backstretch through fractions of 21.91 and 44.78, then opening up to 2 lengths in midstretch after 5 furlongs in 57.15. 5-1 Victorianna, who stalked her in second throughout, closed the gap in the final furlong but Pola's Place held her off by 3/4 length, getting the gate-to-wire victory in 1:10.37. It was just a head back to 3-1 second choice Just for Keeps, while favorite Gem Sleuth was sixth early, took the turn very wide, and showed no rally, finishing seventh.
Results Chart

Winning trainer David Pate said, "I love this filly today. We made a little bit of a mistake with her going in the last stakes (Wishing Well, Jan. 12), and she came out with a lung infection. But other than that race, she has run very well. This is a very good filly. I had told Randy Wehrman (stakes coordinator) I thought she was the best filly on the grounds." Winning jockey Thomas Pompell said, "I was told to let her break and there was really nothing that could go with her if she did. She relaxed very nicely and just kept on going. She's a very nice filly to ride."