The road to the Triple Crown came through Turfway Park in Florence, Kentucky, on Saturday with the $500,000 Lane's End Stakes (G2) for 3-year-olds at 1 1/8 miles over the new Polytrack racing surface along with the Rushaway Stakes at 1 1/16 miles and the 6 furlong Hansel Stakes. The 23,114 fans in attendance, a new record, were treated to rapidly changing weather conditions with the only consistent factor being cold temperatures and brisk winds. There was sun, dark clouds, rain, ice pellets, and snow, yet the track remained "fast" all day.

A full field of twelve entered the gate and with expected favorite Strong Contender failing to draw into the race due to insufficient earnings, the Lane's End was a wide-open affair. European shipper Silent Times was sent off as the lukewarm 7-2 favorite despite not having raced since last September when he won the Champagne Stakes at Doncaster. Nick Zito-trained Superfly was the 4-1 second choice and stablemate Hemingway's Key was the 5-1 third choice.

Also on the card was Bourbonette Breeders' Cup Stakes, a Kentucky Oaks preps for the 3-year-old fillies.

6-1 shot Tahoe Warrior led the field around the clubhouse turn through a quarter in 23.56 when 26-1 shot Sharp Attack took over on the backstretch. With 7-1 shot Laity and 16-1 Starspangled Gator in stalking position, Sharp Attack traveled a half mile in 47.38 and 3/4 in 1:11.88. Around the far turn, 49-1 outsider With a City with jockey Brice Blanc aboard, the longest shot on the board, was just finding his best stride after sitting in sixth the whole way around. Taking a four-wide path, With a City quickly drew even with the leaders and pulled away through the stretch to win by 1 1/4 lengths over another late charger, 11-1 Seaside Retreat. The time for the 9 furlongs was 1:51.11. It was another 1 1/2 lengths back to 15-1 Malameeze in third. Superfly disappointed in fifth ahead of Hemingway's Key, while favorite Silent Times was slow out of the gate, raced in seventh early, and failed to fire late, finishing 11th.
Results Chart from DRF. 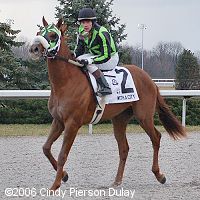 With a City returns after the race. Winning jockey Brice Blanc said, "(Trainer Mike Maker) was worried about (With a City) not liking the kickback, but I was able to put him on the rail where there wasn't much kick. He responded really well when I asked him. Even though I didn't know him, he seemed very confident in the paddock. He trains at Churchill, so he shouldn't have any trouble running there." 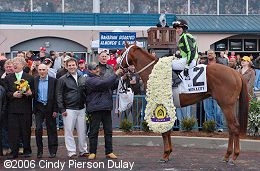 With a City in the winner's circle with Ron Peltz, president of ownership group Equirace LLC, on the right looking very happy. Winning trainer Mike Maker said, "The Kentucky Derby has been the plan all along. We might look at going to Arkansas and running in the Derby down there. He's kind of a lazy horse. He's not aggressive at all. His race in the Battaglia showed that he needed blinkers. He was wandering and climbing. He also bled pretty badly." 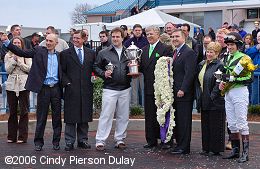 The entire Equirace partnership crew at the trophy presentation. Ron Peltz, president of owner Equirace.com LLC said, "Everybody told me I was crazy when I bought this horse privately for $150,000. But I always loved this horse. After his race at Calder, the opportunity arose for me to purchase him, and I took him. I was very confident that he would run a good race today." Immediately after the race, Peltz nominated With a City to the Triple Crown as Saturday was the deadline for late nominations. 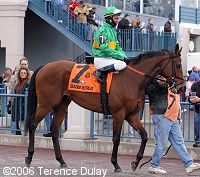 Second place finisher Seaside Retreat and jockey Patrick Husbands head head for the track before the race. He was a stakes winner at Woodbine as a 2-year-old and 5th behind Bluegrass Cat at Tampa Bay in his first start this year. 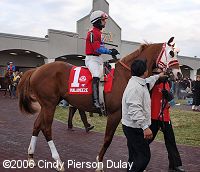 Third place finisher Malameeze in the paddock prior to the race with John McKee up. 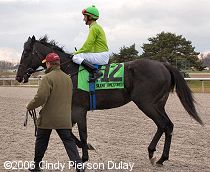 Beaten favorite and 11th place finisher Silent Times in the post parade. He had been off since September so this was quite a lot to ask of him despite being a Polytrack specialist. 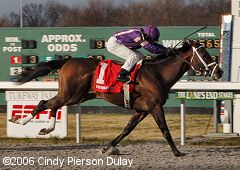 Immediately before the Lane's End, another full field of 12 entered the starting gate for the $100,000 Rushaway Stakes at 1 1/16 miles. 7-2 favorite High Cotton led the field through easy fractions of 47.49 and 1:12.14 while being challenged by Warrior Within down the backstretch, and had plenty left to kick clear through the lane to win by 2 1/4 lengths over late closing Special Interest in a time of 1:45.19.
Results Chart from DRF. 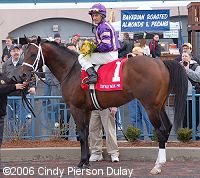 High Cotton in the winner's circle. Mike Dilger, assistant to winning trainer Todd Pletcher said, "We were a little surprised there wasn't more pace in the race. The horse ships to Keeneland tomorrow. Todd will decide on his future sometime shortly after that." Winning jockey Christopher DeCarlo said, "He puts himself into the race. He didn't break as alertly as I would have liked, but I was able to secure good position by the turn and on the backstretch he was just cruising along." 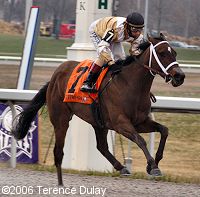 Kicking off the stakes action on Saturday afternoon was the $50,000 Hansel Stakes for 3-year-olds sprinting 6 furlongs. 7-1 shot Skeleton Crew took over the lead at the quarter pole off a brisk first quarter in 22.12 and then held off the late charge of 9-5 favorite Final Copy to win by a neck in a time of 1:10.77. It was just 3/4 length back to Cognac Kisses in third. Winning trainer Katharine Voss said that Skeleton Crew may start next in the Federico Tesio Stakes at Pimlico.
Results Chart from DRF.