The Lane's End Stakes at Turfway Park is a major prep for the Kentucky Derby, but on its undercard is a major prep for the Kentucky Oaks. A field of nine 3-year-old fillies faced the starter in the $150,000 Bourbonnette Breeders' Cup Stakes (G3) at 1 mile on the Polytrack. Patrick Biancone trainee Sabatini was sent off as the 6-5 favorite off her second place finish in the Santa Ysabel Stakes at Santa Anita in her last start. Also in the field were 4-1 second choice Coronado's Vision and 5-1 third choice Lemons Forever, both allowance winners in their previous start and making their stakes debuts. It was a very cold and windy day in Florence, but the Bourbonnette fillies and their riders faced the worst conditions of the day as a light shower quickly changed to blowing snow as they loaded into the gate. The snow eased up shortly after the field completed the distance.

Coronado's Vision contested the pace the whole way, getting the half in 47.14 and 3/4 in 1:12.78 while battling with 71-1 longest shot Champagne N Glory and 11-1 shot Capozzene in those early stages. She looked to be home free at the 1/8 pole but 7-1 shot Top Notch Lady, who had raced in striking position in fifth early on while staying out of trouble on the outside, was just hitting her best stride. Jockey Robby Albarado asked her to change leads in mid-stretch and she did so, finding an extra gear to kick past Coronado's Vision at the 1/16 pole to prevail by a neck in a time of 1:39.26 for the mile. It was just 3/4 length back to late-closing Lemons Forever in third, and another 3/4 more to favorite Sabatini in fourth.
Results Chart from DRF. 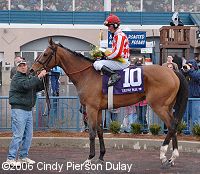 Top Notch Lady in the winner's circle with the snow almost over. Winning trainer Mark Casse said, "I wasn't too concerned about her running off the layoff. I told Mr. (owner Robert J.) Wilson that she likes the Polytrack and, if she gets beat, it's not because she's short. She will likely return to Canada for her next start."

Winning jockey Robby Albarado said, "She got over the track great. When I asked her, she really responded. She is a really nice filly." 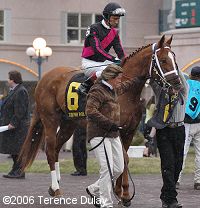 Second place finisher Coronado's Vision and jockey Edgar Prado in the paddock before the race. 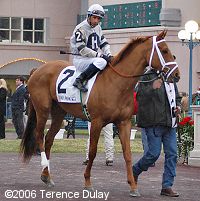 Third place finisher Lemons Forever heads for the track before the race with David Flores up. 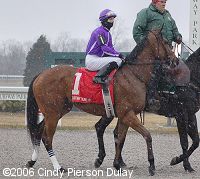 Beaten favorite and fourth place finisher Sabatini in the post parade with the snow storm starting in earnest. Her jockey Julien Leparoux said, "She closed ground but flattened out near the finish. I lost my whip at the 1/4 pole. I don't think that cost us the win, but it may have cost us a placing. We're happy with her race, though. She took to the track well. The conditions weren't great, but they were the same for everybody." Trainer Patrick Biancone said Sabatini would return to sprints. 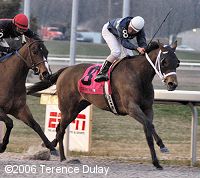 The last stakes race on the card was the $50,000 Queen Stakes for older female sprinters. A field of seven faced the starter in this 6-furlong sprint. 5-2 third choice Very Vegas dueled with 2-1 second choice Songfest down the backstretch through a brisk pace of 21.90 and 45.27. Songfest faded from contention at the top of the stretch, allowing Very Vegas to open up a 1 1/2 length lead with a furlong to go. 11-1 outsider Eastern Lily made a strong rally late but was left with too much to do, as Very Vegas hung on to prevail by a neck, in a time of 1:11.44, for her 10th win in 33 career starts. 6-5 favorite Listen was just a nose back in third.
Results Chart from DRF.