The feature race on Saturday at Woodbine was the $100,000 La Lorgnette Stakes for 3-year-old fillies going 1 1/16 miles over the Tapeta main track. Conditions were excellent for early September, with partly cloudy skies, minimal wind, and temperatures in the low 60's. Shamrock Rose was sent off as the 5-2 favorite in the field of 10 off her win in the Malvern Rose Stakes at Presque Isle after finishing 3rd in the Weber City Miss Stakes at Laurel Park. In to challenge her included 13-4 second choice Avie's Mineshaft, winner of the Wonder Where Stakes after finishing 2nd in the Bison City, and 4-1 third choice A.A. Azula's Arch, 2nd in the Ontario Colleen (G3) but a disappointing 8th in the Pucker Up (G3) at Arlington last out. 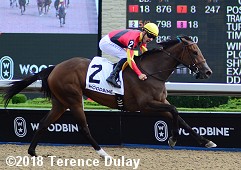 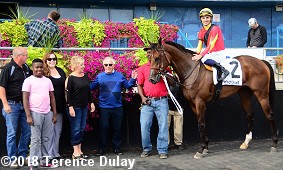 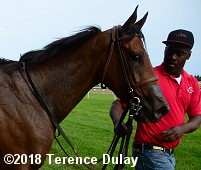 Left: Shamrock Rose in the winner's circle. Winning jockey Jerome Lermyte said, “Definitely there was a sure game plan. She just took a very good start so I tried to make the best of it and we had the chance to be able to rate the fractions a little bit. We went quite a slow pace. She did a very good performance today. I'm very happy, very pleased with her."

Right: Shamrock Rose heads back to the barn after the race. The Mark Casse trainee improved her record to 3 wins, 2 seconds, and 1 third in 8 starts, earning $217,687 for owner Conrad Farms (Manfred and Penny Conrad). 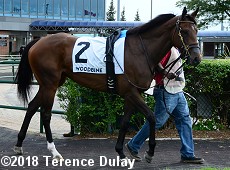 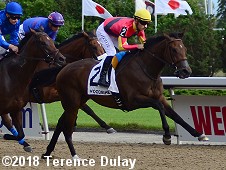 Left: Shamrock Rose heads into the paddock before the race.

Right: Shamrock Rose leads first time by. Lermyte added, "I saw Avie's Mineshaft on my outside and obviously she was, on paper, one of my rivals and so when I started asking and saw she was actually opening up, I thought at this point not many were going to join me. I knew we were going for the victory." 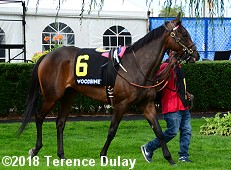 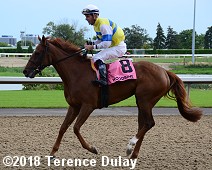 Left: Second place finisher Miss Mo Mentum in the paddock before the race. The 6-1 fourth choice sat 8th 5 lengths off the pace early under Patrick Husbands, then rallied to get second beaten 4 1/2 lengths. The Mark Casse trainee improved her record to 4 wins, 2 seconds, and 0 thirds in 12 starts, earning $214,343 for owner Gary Barber.

Right: Third place finisher Cosmic Love returns after the race. The 18-1 shot sat 9th 7 lengths off the early pace under Steven Bahen then rallied to get third beaten 5 1/4 lengths. The Roger Attfield trainee improved her record to 1 win, 2 seconds, and 2 thirds in 7 starts, earning $17,093 for owner Triton Stable.