The feature race on Canada Day at Woodbine as part of the country's 151st birthday festivities, is the $125,000 Dominion Day Stakes (G3), featuring the top older horses on the grounds going the classic distance of 1 1/4 miles on the Tapeta, and this year is the closing day of the now three-day Queen's Plate Festival. The unusually hot conditions continued, with sunny skies and temperatures in the mid 90's feeling closer to 110 with the humidity, with the Tapeta rated fast (standard) and the turf rated firm (GoingStick reading 11.7). Last year's winner Melmich was sent off as the 3-2 favorite in the field of 7 off second place finishes in the Valedictory (G3) and the Eclipse (G2). In to challenge him included 2-1 second choice Are You Kidding Me, runner-up last year and winner of the Eclipse (G2) and 4-1 third choice Gigantic Breeze, 3rd in the Eclipse after disappointing 11th as the favorite in the Claiming Crown Jewel. 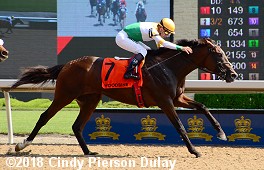 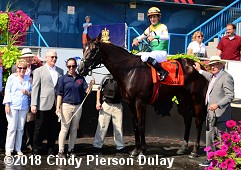 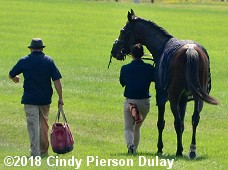 Left: Tiz a Slam in the winner's circle. Winning trainer Roger Attfield said, "This horse actually trained super into this race. He's a big, long-striding horse and he likes just to gallop. The last few races, we've been wide in some of those races because you can't check him. He's got to keep striding. He trained like he could win the race if he got his trip and he dug in well down the lane, which I was clearly pleased to see. He's a nice horse."

Right: Tiz a Slam heads back to the barn. 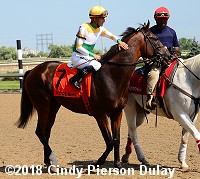 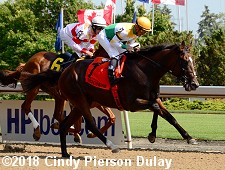 Left: Tiz a Slam in the post parade. Winning jockey Steven Bahen said, "I know we were going pretty slow and he was tugging me the whole way. He got some good fractions and that's why he finished up so strong. Roger had him ready today and it was fantastic." 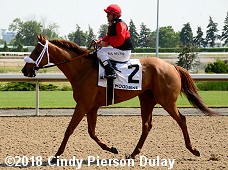 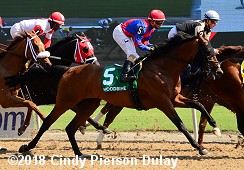 Right: Third place finisher Are You Kidding Me first time by. The Roger Attfield trainee improved his record to 12 wins, 7 seconds, and 8 thirds in 39 starts, earning $1,202.003 for owner-breeder Ronald Kirk, John Bates, and Michael Riordan.

A field of 7 Canadian-bred 3-year-old fillies contested the $225,000 Bison City Stakes over 1 1/16 miles on Tapeta, the second leg of the Canadian Triple Tiara, but with Woodbine Oaks winner Dixie Moon and runner-up Wonder Gadot opting to run in yesterday's Queen's Plate, this race became wide open. Hot Cash, 3rd in the Woodbine Oaks, was sent off as the 2-1 favorite over 7-2 Avie's Mineshaft, 4th in the Selene (G3), and 4-1 Katie Baby, off her maiden win at second asking.

Jockey Eurico Rosa da Silva sent Katie's Baby loose on the lead through fractions of 23.95, 48.28, and 1:12.72 while stalked by Avie's Mineshaft and 5-1 Lunar Garden. Entering the lane, Katie Baby continued to lead through 1 mile in 1:37.83 but 11-2 Safe to Say, 5th early under Jerome Lermyte, came out 4 wide for room and rallied to outfinish Avie's Mineshaft by a neck in 1:44.41. It was a head back to pacesetter Katie Baby third, and 3/4 more to favorite Hot Cash fourth. 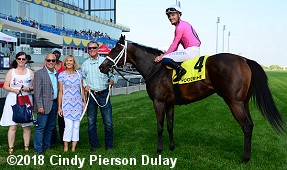 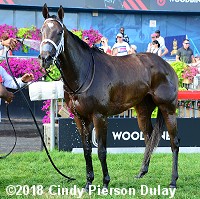 Left: Safe to Say in the winner's circle. Winning jockey Jerome Lermyte said, "We didn't want to get in traffic trouble. The race unfolded perfectly. When we asked her, she delivered a nice fight and she went all the way. We are very happy today." Owner Jeff Begg added, "She's always been a pretty nice filly, but just couldn't quite find the exact thing for her. I think she's a 7/8 to a mile horse. That's why we passed the Woodbine Oaks and we came here, it's a little shorter. She showed some form on the turf, so we might head that direction as well. She just seems like she's put it together this year."

Right: Right: Safe to Say gets hosed off after the race. 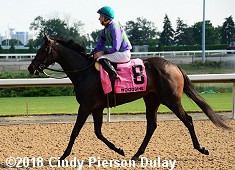 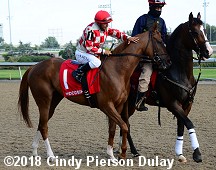 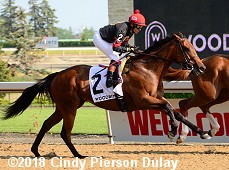 Right: The fillies break from the gate for the Bison City Stakes.

Kicking off the Canada Day stakes action was the $100,000 Zadracarta Stakes for Ontario-bred older fillies and mares sprinting 7 furlongs on the turf. Nassau Stakes (G2) winner Niigon's Eclipse was sent off as the 2-1 favorite in the field of 10 over 5-2 Jennifer Lynnette, 5th in the Hendrie (G3), and 3-1 Silent Sonet, 5th in the Whimsical (G3) amd 4th in the Ballade.

Jockey Luis Contreras sent 15-2 Dublin Diva to the lead through fractions of 22.60 and 44.73 while pressed by 32-1 Listenlindalisten and stalked by Silent Sonet. Entering the stretch Dublin Diva tired as Silent Sonet took over the lead through 3/4 in 1:07.42. Kept to task by Eurico Rosa da Silva, Silent Sonet cruised to a 1 1/4 length win over late-running favorite Niigon's Eclipse in 1:19.74, just 36/100 off Soaring Free's 2004 course record. It was another 1 3/4 length back to 46-1 Sugar Jones third. Due to a timer malfunction this race was hand-timed. 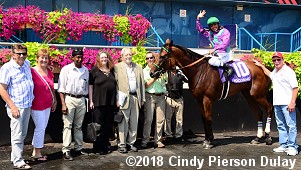 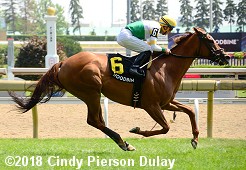 Left: Silent Sonet in the winner's circle. Winning jockey Eurico Rosa da Silva said, "Our plan was to stay back a little bit more. We know she loves the grass and she was very keen today. She broke there and she positioned herself in third and second place, she was traveling very easy and I didn't want to bother her. She was happy where she was. When we turned for home, she kicked from there."