The feature race on Sunday at Saratoga Race Course was the $150,000 Woodford Reserve Lake Placid Stakes (G2) for 3-year-old fillies going 1 1/8 miles on the Mellon turf course. Early rains rendered the turf yielding, but skies were clear for the races with temperatures in the upper 70's. Officially 50,870 came through the turnstiles but this number was inflated by "spinners" taking advantage of the sports bag giveaway. Winter Memories was sent off as the 2-5 favorite in the field of 7 off three straight wins, in the Appalachian (G3), Sands Point (G2) and Lake George (G2). In to challenge her included 7-1 second choice Kathmanblu, fourth in the Regret (G3) at Churchill last out, and 8-1 third choice Bellamy Star, second in the Lake George after winning the Xtra Heat Stakes.

Jockey John Velazquez sent Bellamy Star to the lead first time past the stands and she set easy fractions of 26.07, 51.91, and 1:17.18 while as many as 2 lengths in front of Kathmanblu stalking her in second. Favorite Winter Memories raced in midpack 5th about 4 lengths off the pace and 3 wide early. Entering the stretch, Bellamy Star tired allowing Kathmanblu to take over the lead at the 3/16 pole, getting the mile in 1:41.54. 9-1 fourth choice Hungry Island, last down the backstretch, closed late on the outside, passing Kathmanblu at the 1/16 pole and drawing off to win by 2 1/2 lengths in 1:53.77 over the yielding turf. It was another 1/2 length back to 11-1 Dynamic Holiday third, in turn a neck in front of Winter Memories fourth. 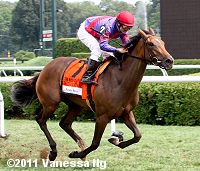 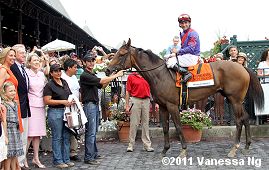 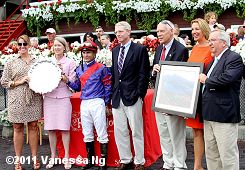 Right: The trophy presentation for the Lake Placid with trainer Shug McGaughey on the far right. McGaughey said, "I didn't know if (Winter Memories) would handle that ground, but I knew we would because we've run on it before. What I liked was, I think he was kind of messing with (Winter Memories) a little bit trying to keep her down on the inside of him and she was still able to finish that way going that far. I think this is a good filly. She's done everything we wanted her to do this year. She trained good after she won at Belmont and I really didn't want to rush her back in the Lake George so we waited and she took all that well. And like Alex just said, 'Everything I wanted her to do in the race, she did.' And she still gave him the kick." 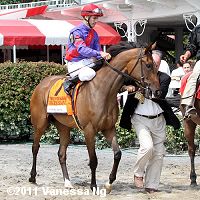 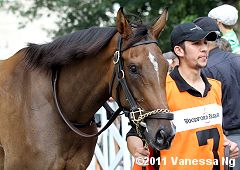 Left: Hungry Island heads out for the post parade. Her jockey Alex Solis said, "My plan was to follow (Winter Memories) the whole way. I had a good trip, and tracked her, and got to the 1/2-mile pole and then I waited a little longer and a little longer. I got out at the 1/4 pole and she did her thing. She's a really nice filly and I knew she was going to handle this track fine because her last race at Belmont was real soft like this and she handled it really nice. She is very amazing, and I'm very proud of her."

Right: Hungry Island in the paddock before the race. 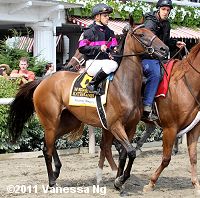 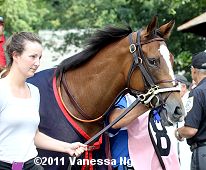 Left: Second place finisher Kathmanblu heads out to the track. The 7-1 second choice stalked the pace in second under new jockey Javier Castellano, gained the lead midstretch but could not contain the winner. The Ken McPeek trainee improved her record to 5 wins, 2 seconds, and 2 thirds in 12 starts, earning $557,430 for owner-breeder Five-D Thoroughbreds and co-owner Wind River Stables.

Right: Third place finisher Dynamic Holiday in the paddock before the race. The 11-1 shot raced in 4th 4 lengths back early under jockey Ramon Dominguez, then passed the tiring pacesetter late to get third beaten 3 lengths at the line. The Graham Motion trainee improved her record to 4 wins, 2 seconds, and 1 third in 9 starts, earning $251,940 for owner-breeder George Strawbridge (Augustin Stable). 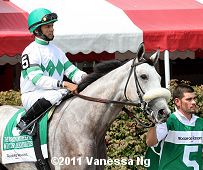 Fourth place finisher and beaten favorite Winter Memories heads out for the post parade. Her trainer James Toner said, "(Jose Lezcano) said she didn't like the ground. She wasn't comfortable. She was in tight all of the way. She was trapped in the whole time. She doesn't like to be between horses. She won the Miss Grillo on soft ground. There are no excuses. When you win, you win; when you lose, you lose. It's Saratoga - the Graveyard of Favorites."