One of the oldest stakes races at Saratoga is the $500,000 Alabama Stakes (G1), featuring the best 3-year-old fillies of the northeast going 1 1/4 miles over the main track. The 33,380 fans in attendance enjoyed sunny skies and temperatures in the mid-80's at the historic oval. It's Tricky was sent off as the 2-1 favorite off her wins in the Acorn (G1) at Belmont and the Coaching Club American Oaks (G1) at Saratoga, and would complete the Triple Tiara sweep with a win here. In to challenge her included 5-2 second choice Inglorious, winner of her last three starts at home at Woodbine, the La Lorgnette, the Woodbine Oaks, and then the Queen's Plate against males, and 4-1 third choice St. John's River, winner of the Delaware Oaks (G2) last out after finishing a close second in the Kentucky Oaks (G1).

Jockey Martin Garcia sent 9-2 Plum Pretty to the lead first time past the stands and she set fractions of 24.54, 49.31, and 1:13.12 while as many as 1 1/2 lengths in front of It's Tricky pressing the pace in second. Inglorious was last and 3 wide during the early stages. Turning for home, Plum Pretty continued to lead through 1 mile in 1:37.05, but 5-1 Royal Delta, who stalked the pace in 3rd, came out wide for room and took over the lead midstretch. Plum Pretty tired late while Royal Delta drew off through the final furlong, finishing up 5 1/2 lengths in front of It's Tricky in 2:03.13 over the fast track. It was another length back to late-running 19-1 Pinch Pie third. 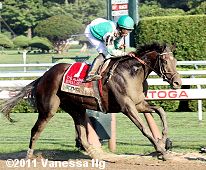 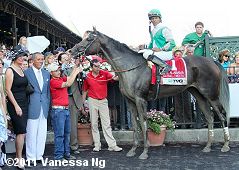 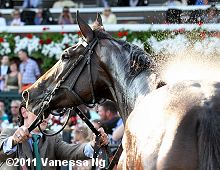 Left: Royal Delta in the winner's circle. Her trainer Bill Mott said, "We have always thought she was a nice filly, and she proves us right all the time. This is a very important race obviously, a Grade 1, and it was our first choice. We've got those (grass) options down the road. I think she's a filly that seems to do anything. She will run over any surface. She has won on the synthetics, won a Grade 1 on the dirt, and has worked well over the grass. Our options are always open, but there is nothing like a good old-fashioned dirt race like the Alabama.

Right: Royal Delta gets hosed off after the race. 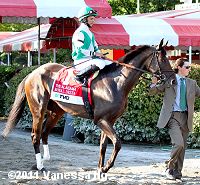 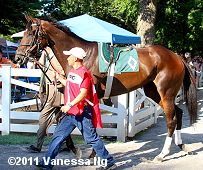 Left: Royal Delta heads out for the post parade. Her jockey Jose Lezcano said, "I tried to make her relax today. Last time she was a little rank, she fought with the bit. But today, I let her break and run the first quarter, and after that I took a little hold and she got very relaxed. I asked her at the 1/4 pole and took her out, and she gave me a big kick. She really took off."

Right: Royal Delta in the paddock before the race. Bill Mott added, "Today the plan was to lay closer and let her find her stride, and she was able to do that. She was really comfortable. Jose did a great job, and she had plenty left. It's a matter of her relaxing and conserving energy for the final run, which she didn't do the time before. The filly was able to draw away from the field which was good, but we will have to go back to the films to watch it again. When she went past them, it was like they shot her out of a slingshot." 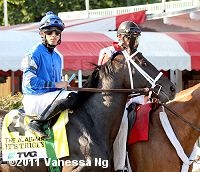 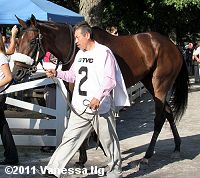 Left: Second place finisher and beaten favorite It's Tricky heads out to the track. Her trainer Kiaran McLaughlin said, "I thought we ran our race and looked good. The winner probably needed her last race and 1 1/4. But we ran a nice race; no excuse. We couldn't have done anything different. We were just second best." Jockey Eddie Castro added, "It was kind of the same as last time, a similar trip. She ran a nice race and she's still a nice filly. There were no excuses. We were hanging in there from the 1/4 pole, then (Royal Delta) passed by us."

Right: Third place finisher Pinch Pie in the paddock before the race. Her trainer Tony Dutrow said, "I'm ecstatic over how our filly ran. I'm so happy with how well she finished up. I really don't know where we will go next, but I am so happy right now." Jockey John Velazquez added, "She ran well to pick up the pieces to finish third. I knew Plum Pretty and It's Tricky would be out there. I just wanted to get my filly to relax behind them. We made our move. Royal Delta was tough today at this distance." 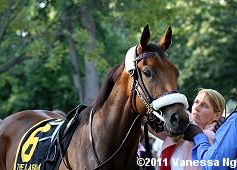 Left: Last place finisher and second favorite Inglorious gets saddled by trainer Josie Carroll in the paddock. Carroll said, "She looked kind of uncomfortable from the start. Going past the first time she was a little ranker than usual. Usually Louie can get her to settle right back, she comes right off the bridle. She was climbing in the dirt a little bit, a little bit on the muscle, much more so than her usual. She dropped back out of it but I thought that was OK when he got her settled. But when he went to pick her up he said he had no horse."

Right: The fillies shortly after the start of the race.