The highlight of closing weekend at Saratoga is the $1 million Jockey Club Gold Cup (G1), a "Win and You're In" qualifier for the Breeders' Cup Classic, contested at the Classic distance of 1 1/4 miles on the main track. The race traditionally has been run at Belmont but was moved upstate this year. Conditions were excellent for early September, with sunny skies, temperatures in the mid 70's, a fast main track and the turf courses firm. Just 6 horses made final entry with Forza Di Oro sent off as the 11-10 favorite off a 3 race win streak including the Discovery (G3) at Aqueduct in November. In to challenge him included 2-1 second choice and last year's winner Happy Saver off his 3rd place finish in the Suburban (G2), and 7-2 third choice Max Player, winner of the Suburban.

Jockey Junior Alvarado sent Forza Di Oro to the lead first time by and he set fractions of 24.05, 48.70, and 1:13.14 while pressed by Max Player and stalked by Happy Saver and 13-2 fourth choice Night Ops. Turning for home Forza Di Oro continued to lead through 1 mile in 1:37.77 but Max Player moved 3 wide for room and swept to the lead through 9f in 1:49.88. Kept to task by Ricardo Santana Jr., Max Player drew away late to win by 4 lengths over Happy Saver in 2:02.49. It was another 1/2 length back to favorite Forza Di Oro third. 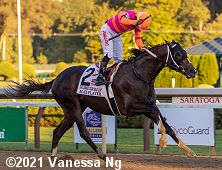 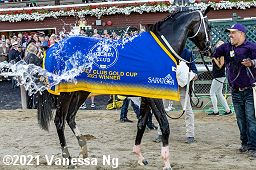 Left: Max Player in the winner's circle. Winning trainer Steve Asmussen said, "He likes to be where he's going to run. Physically, he looks great. He's matured wonderfully. He's made a beautiful older horse, getting strong and running his best races at the right time. "He completely lost focus over there [11th in the Saudi Cup in February]. It was too much for him to run his race at where he was physically. He likes good spacing between his races. Ricardo has done a tremendous job of putting him into the race, so he can actually perform."

Right: Max Player in his winner's blanket getting a bucket of water dumped on him. 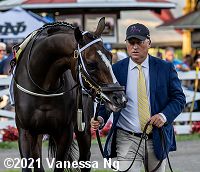 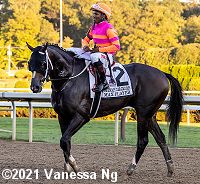 Left: Max Player in the paddock before the race. Asmussen added, "There were questions. His Suburban was so much better than his four previous races for us - more than considerable - but it was on an off track and an odd configuration. To do it here at a more traditional mile and a quarter on a fast race track more than validates his Suburban. I will speak with Mr. [George] Hall [owner], but I think the right thing to do is to go out [to Del Mar] early and wait for the Classic." 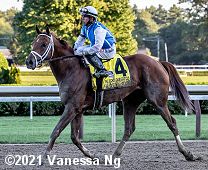 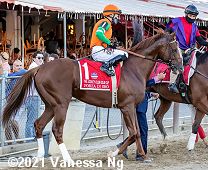 Left: Second place finisher Happy Saver returns after the race. Trainer Todd Pletcher said, "I thought he ran very well. We got bottled up in behind horses in a pace-less race. He ran on well, but we'd benefit from a more truly run race. I'm proud of his effort." Jockey Irad Ortiz Jr. added, "I had perfect trip. We got beat by a nice horse. He did everything right, he just got beat."

Right: Third place finisher and beaten favorite Forza Di Oro heads out to the track before the race. Trainer Bill Mott said, "I'm disappointed that he didn't get the 10 furlongs. I just didn't think he had any excuse. We've got to see. There's another race; the Woodward could be a possibility, I suppose. But it's a little early to commit to anything." Jockey Junior Alvarado added, "We had a great trip. No excuse whatsoever; the winner was the best horse. I thought we could have held for second, but he got tired on me at the end. It could be a distance thing, where maybe he doesn't want to go that far, but other than that, there's no real excuse." 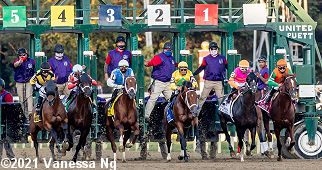 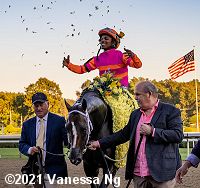 Left: The horses break from the gate for the Jockey Club Gold Cup.

The $200,000 Saranac Stakes (G3) featured a field of 6 three-year-olds going 1 1/16 miles on the inner turf course. Hall of Fame Stakes (G2) winner Public Sector was sent off as the 6-5 favorite over 9-5 second choice Never Surprised, unraced since 2nd in the Kitten's Joy (G3) at Gulfstream in January, and 9-2 third choice Founder, winner of the Tale of the Cat Stakes.

Jockey Luis Saez sent Never Surprised to the front first time by through fractions of 23.73, 49.19, and 1:12.42 while pressed by 8-1 fourth choice Like the King and stalked by 26-1 longest shot He'spuregold. Turning for home Public Sector, 4th early under Irad Ortiz Jr., came out 4 wide and swept to the front through 1 mile in 1:35.78. Public Sector outfinished Never Surprised to win by a length in 1:41.78. It was another length back to Like the King third. 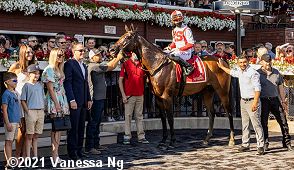 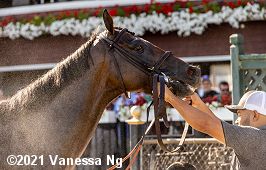 Left: Public Sector in the winner's circle. Winning trainer Chad Brown said, "He broke well and Irad let them run a way a little bit. I thought maybe he would run on to the turn and make them go a little bit more, but he decided to take that first eighth of a mile that way where he just let them get a way a little bit, but quickly he scooted up into the pocket not too far away. From there, I thought we at least had a fair chance to win the race without knowing how he would do when he would draw alongside a really good horse."

Right: Public Sector gets hosed off after the race. Winning jockey Irad Ortiz Jr. said, "I got a perfect trip. We broke well from the one-hole and two horses had speed, so I sat off of them. When it was time to roll, I asked my horse and he was loaded. When he switched leads, he gave me a good turn-of-foot. He responded really well." 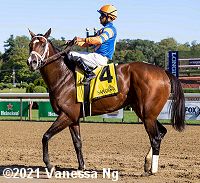 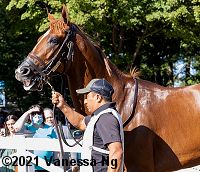 Left: Second place finisher Never Surprised returns after the race. Jockey Luis Saez said, "I had a good trip. He was moving well and ran really hard. That other horse came flying. He tried hard."

Right: Third place finisher Like the King enters the paddock before the race. The Wesley Ward trainee improved his record to 3 wins, 3 seconds, and 2 thirds in 10 starts, earning $259,090 for owner M Racing Group.

The horses break from the gate for the Saranac Stakes.