The undercard feature on Jockey Club Gold Cup day at Saratoga was the $500,000 Flower Bowl Stakes (G1), with a field of 6 older fillies and mares going 1 3/8 miles on the inner turf course in this Breeders' Cup Challenge Series "event for the Filly and Mare Turf. War Like Goddess was sent off as the 2-5 favorite off a 3 race win streak including the Orchid (G3), Bewitch (G3), and Glens Falls (G2). In to challenge her included 6-1 second choice La Signare, 2nd in the Gamely (G1) before finishing 3rd in the Diana (G1), and 13-2 third choice Great Island, winner of the Matchmaker (G3). 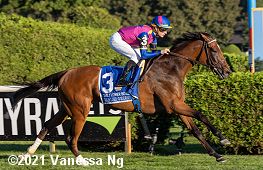 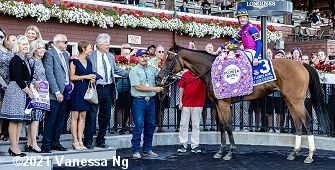 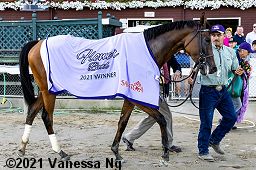 Left: War Like Goddess in the winner's circle. Winning trainer Bill Mott said, "When they were coming out of the turn; I was watching the race and the pillar from the grandstand was in the way, so I didn't know if she was still on the inside or the outside. Then by the time she came, I could see that she made her way to the outside and was clear. She was tucked in most of the way. Julien tipped her out and got running room. She's won on the inside before. If you can get a clear run, that's all you need."

Right: War Like Goddess heads back to the barn after the race. Winning jockey Julien Leparoux said, "She's a classy filly. You can do whatever you want and she'll still give you that punch in the end. Its nice. It's a sign of the good ones, for sure. Bill knows how to get them to these Grade 1s. They took their time with her and it has paid off. For sure, the Breeders' Cup is the goal, so if she gets there healthy, she'll be going in with a big chance." 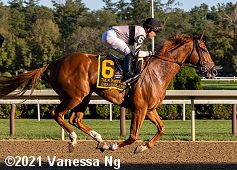 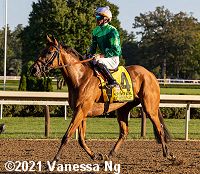 Left: Second place finisher Great Island warms up before the race. Jockey Joel Rosario said, "She was closing really nicely. The other horse had a better kick than I did. She ran well. I thought for a second we were getting there. She seems fine with the distance. The winner was much better."

Right: Third place finisher My Sister Nat returns after the race. The Chad Brown trainee improved her record to 3 wins, 7 seconds, and 5 thirds in 19 starts, earning $660,672 for owner Peter Brant.

Kicking off the Saturday stakes quartet was the $250,000 Prioress Stakes (G2) for 3-year-old fillies sprinting 6 furlongs on the main track. After 1 scratch, a short field of 5 went to post with Victory Ride (G3) winner Souper Sensational sent off as the 9-10 favorite off her 2nd place finish in the Test (G1). In to challenge her included 5-2 second choice Oxana off 2 allowance wins, and 3-1 third choice Edie Meeny Miny Mo, 2nd in the Monmouth Oaks (G3).

Jockey Victor Espinoza sent Edie Meeny Miny Mo to the lead out of the chute through fractions of 22.25 and 45.06 while pressed by 10-1 Cilla and stalked by Souper Sensational. Entering the stretch Edie Meeny Miny Mo tired badly allowing Souper Sensational to gain the lead through 5f in 57.08, but Cilla and jockey Tyler Gaffalione, 4 wide, rallied by to win by 1/2 a length in 1:10.05. It was another 1 1/4 length back to 14-1 longest shot Li'l Tootsie third. Ricardo Santana Jr. aboard Souper Sensational claimed foul against Gaffalione for interference but the claim was disallowed by the stewards. 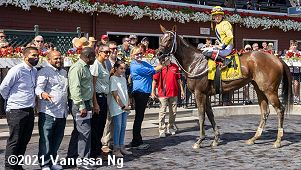 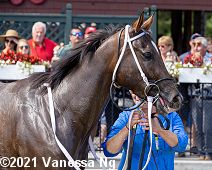 Left: Cilla in the winner's circle. Winning trainer Brett Brinkman said, "She's fast and she's a 3-year-old. There's limited opportunities for those fillies. We felt like after we got her on track a couple of races ago and that we were going to let her step along and buy her way to the next one. She's obviously bought her way to this one. I felt like both horses were a little bit at fault (in the inquiry). Both fillies were running and both jocks were riding. The stewards were going to make whatever call they make, but I was still proud of my filly. She ran her race."

Right: Cilla heads back to the barn after the race. Winning jockey Tyler Gaffalione said, "You want to ride a clean race and keep a straight path. Unfortunately, my filly was just getting a little bit tired and every time I asked her she wanted to come out a little bit. But we never crossed that line and I was pretty confident that we were going to stay up. I'm just thankful for this opportunity." 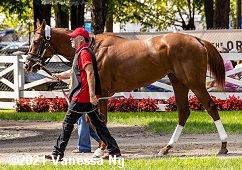 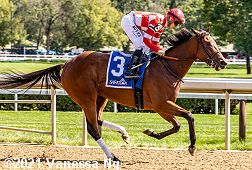 Left: Second place finisher and beaten favorite Souper Sensational in the paddock before the race. Trainer Mark Casse said, "I think [the stewards] made the right decision. There was some contact but we couldn't get by her. She just beat us today. Maybe a little [had her momentum stopped], but I can't disagree with their decision. Ricardo thought it cost her momentum and that when he hit her, she stopped running. These are big races. It has to be clear cut and I don't think it was. I think the right decision was made."

Right: Third place finisher Li'l Tootsie warms up before the race. The Tom Amoss trainee improved her record to 3 wins, 1 second, and 1 third in 9 starts, earning $179,120 for owner Joel Politi.