With the cancellation of racing on Thursday due to heat and humidity concerns, three stakes races were carded on Friday at Saratoga Race Course. The highlight race of the card was the $150,000 Honorable Miss (G2), a handicap for older fillies and mares sprinting 6 furlongs on the main track. Winning Colors Stakes winner Ever Elusive was made the 2-1 favorite off her 2nd place finish in the Lazer Show at Churchill Downs in her last start. Also in the field were 3-1 second choice Reunited, who hasn't won since last October at Keeneland, and 7-2 third choice Malibu Mint, winner of the Grade 1 Princess Rooney at Calder in her last start.

When the gate opened, 4-1 fourth choice Stormy Kiss went to the front and battled with 8-1 Miss Elsie to her outside through a quick quarter in 22.80 and a half in 45.85. Favorite Ever Elusive stalked them in third, out of trouble four wide the whole way. Entering the stretch, Malibu Mint, who had raced at the back of the field down the backstretch, came out five wide on the turn and was gaining with every stride for the stretch run. Inside the eighth pole, 10-1 Grecian Lover, who stalked the pace in midpack early, put in a challenge but was turned away by Stormy Kiss and faded to finish fourth, while the onrushing Malibu Mint was quickly closing the gap. In the final 50 yards, Stormy Kiss held off Malibu Mint to prevail by just a neck, in a time of 1:10.58 over a main track rated "fast" despite earlier rains. It was another 1 3/4 lengths back to Miss Elsie in third, while favorite Ever Elusive faded late and finished a disappointing fifth. 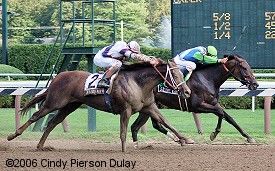 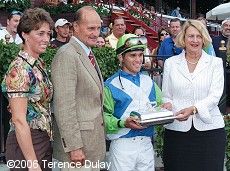 Assistant trainer Robin Smullen, trainer Barclay Tagg, and jockey Javier Castellano with the trophy for the Honorable Miss Handicap. Castellano said, "She's a sharp filly and quick out of the gate, but she actually stumbled the first jump. She made the lead easy, and turning for home, I had a lot of horse. I was worried about (Malibu Mint) and Johnny Velazquez (aboard Ever Elusive). But it wasn't Johnny's day today. I don't know about seven-eighths, it was pretty close today." 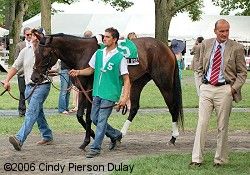 Stormy Kiss in the paddock with trainer Barclay Tagg in attendance. Tagg said, "I told Javier that things were pretty much up to him. I thought Javier that if she was willing to stalk, don't rush her up there. As soon as she stumbled, she was on the muscle and rushed right up there. I thought Javier rode her beautifully. He took a nice hold of her without fighting her. She was nice and relaxed today and able to get the job done. I would live to run her here once more. I think seven furlongs or a mile; she could settle into that stride and stretch out without any problem. She's a good filly, and we'll think about the Ballerina (on August 27)." 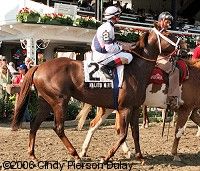 Second place finisher Malibu Mint comes on the track for the post parade. 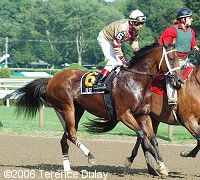 Fifth place finisher and beaten favorite Ever Elusive in the post parade. Her jockey John Velazquez said, "She jumped in at the start, but it didn't cost me anything. I was in-hand at the half-mile pole, but when I let her go, she didn't have anything. It just wasn't her day today." Trainer Todd Pletcher added, "She had a good trip. She doesn't seem to run as well when there is a lot of moisture in the track." 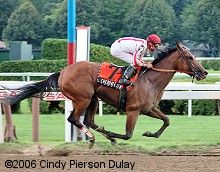 There were two $70,000 overnight stakes races on the undercard. The Capote Belle Stakes featured three-year-old fillies who had never won a stakes race, sprinting six furlongs on the main track. 3-1 second choice Cherokee Jewel sat back in sixth early, then found an opening along the rail at the 1/8 pole to charge on through to win going away by 2 1/4 lengths over 4-1 Khalila in a time of 1:11.08. 2-1 favorite India finished fifth. The win extends Cherokee Jewel's lifetime record to 4 wins and a second in five career starts, with earnings of $117,050.
Results chart from Equibase 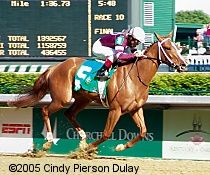 The Ashado Stakes featured older fillies and mares who had not won a stakes this year, going 1 1/8 miles on the main track. 2-1 second choice Summerly hugged the rail and battled with 6-5 favorite Yolanda B. Too around both turns through a half in a slow 49.02 and 3/4 in 1:13.55. Summerly opened a 2 length lead at the 1/8 pole after a slow mile in 1:39.19, and then held off Yolanda B. Too who came on again, prevailing by a length in a time of 1:53.11 over the "good" main track. It was a long 6 lengths back to 3-1 third choice In The Gold in third. Summerly, who won last year's Kentucky Oaks (shown on the left) but had not raced in over a year since the 2005 Coaching Club American Oaks, improved her record to 6 wins in 11 starts with earnings of $882,663.
Results chart from Equibase