The Grade 1 Coaching Club American Oaks is the second leg of the New York Triple Tiara with the first being the Mother Goose also at Belmont and the final being the Alabama Stakes at Saratoga. A field of 7 three-year-old fillies went to the gate in this $500,000 event over 1 1/4 miles at Belmont Park, with Mother Goose winner Smuggler sent off as the 5-2 favorite by the crowd of 7,131 in attendance. Also in the field were Black Eyed Susan winner Spun Sugar at 3-1 and Kentucky Oaks winner Summerly at 4-1.

When the field was sent on its way, Jerry Bailey and Summerly broke awkwardly but got up to speed quickly enough to grab the early lead, contesting the pace with Spun Sugar who got to the inside to save ground. The pair clicked off moderate fractions of 25.01, 49.19, and 1:13.63 over the fast main track, while favorite Smuggler sat just off of them in stalking position in third. At the top of the stretch, after a mile in 1:38.66, Summerly continued to stubbornly hold the lead but Smuggler was making her move out three wide. With a furlong to go, Edgar Prado asked Smuggler for run and got it, as she found another gear and powered away for the easy 3 1/2 length victory in a time of 2:04.39. Summerly held off a late attempt by Spun Sugar, keeping second place by a head. It was 6 lengths back to the rest of the field.

Winning trainer Shug McGaughey said, "I've got to give a little credit to Edgar. We had a little talk at the barn the other day. He said he was going to wait. He said she relaxed in behind those horses. She just cruised to them. She does it so easy I'm kind of floored a little bit. Her last two races I think Edgar learned a little bit about her. She has taken to racing good now. She likes to be trained. We have four weeks to the Alabama now. I feel like we are in pretty good shape. It is pretty exciting. We have been looking for a really nice horse for a while. It looks like we have one now. She is a pro in everything that she does. She goes over to the monitoring barn. She stands in the paddock. We had a delay. It's no big deal. She does everything right." Smuggler will be attempting to sweep the New York Triple Tiara with a win in the Alabama at Saratoga. 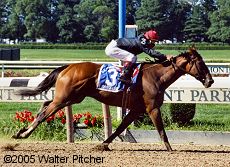 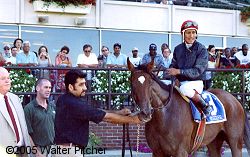 Smuggler in the winner's circle with owner Ogden Mills Phipps on the far left. Winning jockey Edgar Prado said, "It worked out the way we planned it. I wanted to wait, and then when it was time to go, wait a little more. She is cruise control. But when she takes the lead she waits on horses a little bit; she thinks the race is over. I know if there is ever a horse coming she is going to have another gear. She has gotten real good. I am very lucky that I found her. Things are working fine." 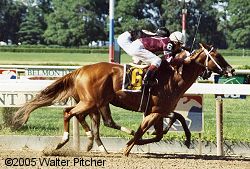 Summerly and Spun Sugar in a photo finish for second. 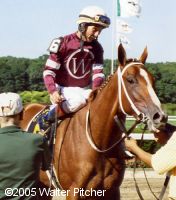 Second place finisher Summerly after the race. Her jockey Jerry Bailey said, "She left it all on the track today. She probably doesn't want to run that far." 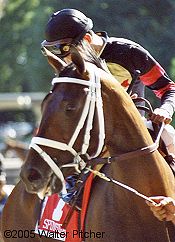 Third place finisher Spun Sugar in the paddock before the race.