The feature race on Saturday of closing weekend at Del Mar was the $300,000 Hollywood Derby (G1) for three-year-olds going 1 1/8 miles on the Jimmy Durante turf course. Conditions were typical for late November at the seaside oval, with the 6,025 fans in attendance enjoying sunny skies and temperatures in the mid 60's. Hall of Fame (G2) and Saranac (G3) winner Raging Bull was sent off as the 9-5 favorite in the field of 13 off his 5th place finish in the Hill Prince (G2). In to challenge him included 5-2 second choice River Boyne, winner of the Twilight Derby (G2) after finishing 3rd in the Del Mar Derby (G2), and 11-2 third choice Instilled Regard, 9th in the Pennsylvania Derby (G1) after finishing 4th in the Kentucky Derby (G1).

Jockey David Cohen sent 10-1 fifth choice Have At It to the lead exiting the chute through fractions of 23.70 and 48.20 while pressed by Instilled Regard and stalked by 49-1 Pubilius Syrus. On the far turn, 7-1 fourth choice Carrick, 4th early, moved up to challenge for the lead through 3/4 in 1:12.48. Entering the stretch, River Boyne, 9th early under Flavien Prat, rallied 3 wide to gain a short lead through 1 mile in 1:36.74. However, favorite Raging Bull, 11th early and 9 length off under Joel Rosario, came out 4 wide into the stretch and rallied to get up for the 1/2 length win in 1:48.34 over the firm going. It was another 2 3/4 lengths back to Instilled Regard third. 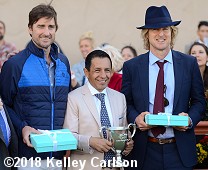 Left: Raging Bull in the winner's circle. John Hernandez, assistant to winning trainer Chad Brown said, "I expected him to be a little closer in the first part. The speed had been holding in the earlier turf races. But he came from off the pace very well. (Joel) Rosario is a good rider and he knows what he’s doing, especially here in California. One (race) down, three (horses to saddle in Sunday’s Matriarch) to go." 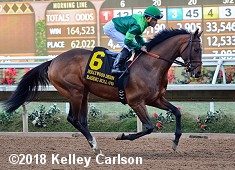 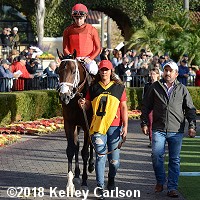 Left: Raging Bull in the post parade. Winning jockey Joel Rosario said, "I thought I was on the best horse, so I rode him that way. With him, he has a powerful quarter mile kick at the end. Terrific acceleration. So I just needed to keep him outside; keep him in the clear where I could ride him at the finish. It worked out just the way I’d hoped." This is Rosario's first Hollywood Derby win.

Right: Second place finisher River Boyne in the paddock before the race. Jockey Flavien Prat said, "He ran great; excellent race for him. I think maybe he likes a mile better." 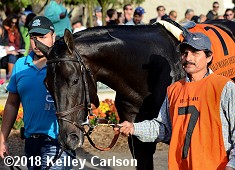 Third place finisher Instilled Regard in the paddock before the race. Jockey Florent Geroux said, "Very good effort from him, especially for his first time on the grass. And he showed good tactical speed; he was right up there with them. That speaks well for the future. He has lots more options now."