The last stakes race run at Aqueduct before racing moves to the inner dirt track for the winter is the $250,000 Go for Wand Handicap (G3), a 1 mile main track contest for older fillies and mares. Conditions were excellent at the Long Island oval, with cloudy skies and a race time temperature of 47. Empire Distaff Handicap winner Bar of Gold was sent off as the 7-10 favorite in the field of 7. In to challenge her included 11-4 second choice Wonder Gal, 10th in the Breeders' Cup Filly and Mare Sprint after finishing 5th in the Gallant Bloom (G2), and 5-1 third choice High Ridge Road, 4th in the Lady's Secret at Monmouth..

Jockey Kendrick Carmouche sent Wonder Gal to the lead exiting the chute and she set fractions of 24.20, 47.67, and 1:12.83 over the fast main track while pressed by 50-1 Burn Control and stalked by 15-2 Highway Star. Wonder Gal continued to lead to midstretch through 7/8 in 1:25.29, but Highway Star, 4 wide, rallied past the pacesetter and was all out to hold off late-closing High Ridge Road to win by a nose in 1:38.07. It was just a neck back to Wonder Gal third, and another 2 1/4 lengths back to favorite Bar of Gold fourth. 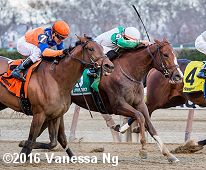 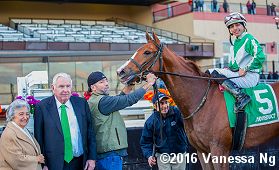 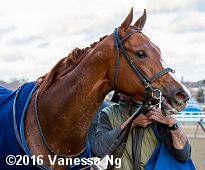 Left: Highway Star in the winner's circle. Winning trainer Rodrigo Ubillo said, "The pace was too slow and Angel was too far back with the pace and everything. I thought we were going to be third with a good pace but he was almost next to last at one point. We were a little bit concerned (with the slow fractions) but it worked out just fine. Every time she runs, she just gets better and better; more feisty and more happy. I ride her myself (in the mornings) and she gives me a good energy. She's almost dropped me off like twice; she jumps and kicks, she's just happy. She likes her job. I'm not afraid to run on the inner track."

Right: Highway Star heads back to the barn after the race. 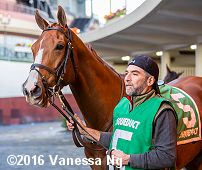 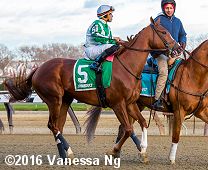 Left: Highway Star in the paddock before the race.

Right: Highway Star in the post parade. Winning jockey Angel Arroyo said, "I feel happy. My filly broke good. I put her on in stalking position and on the backside we were clear and went through. I had her in good control in the stretch and she really responded. She was real strong, I'm excited for her future. She's good." 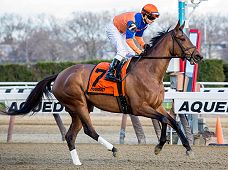 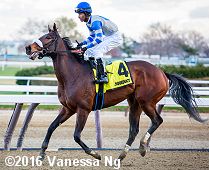 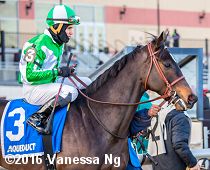 Fourth place finisher and beaten favorite Bar of Gold heads out for the post parade. The 7-10 chocie raced 5th early under Joel Rosario but failed to rally finishing 4th beaten 2 1/2 lengths. The John Kimmel trainee has a record of 5 wins, 3 seconds, and 3 thirds in 16 starts, earning $729,000 for owner-breeder Chester and Mary Broman.