The Breeders' Cup "Win and You're In" series made its way to Belmont Park in New York on Saturday, for the $150,000 Gallant Bloom Handicap (G2) for older fillies and mares going 6 1/2 furlongs, looking for an automatic entry into the Breeders' Cup Filly and Mare Sprint. Only 5,879 fans were on hand on a cloudy afternoon with temperatures in the low 60's. Three-year-old filly Sara Louise, taking on older horses for the first time, was sent off as the slight 1.30-1 favorite in the field of 6, exiting a 2 length win in the Victory Ride Stakes at Saratoga. Last year's winner and champion female sprinter Indian Blessing was back as the 1.35-1 second choice to try and repeat her Gallant Bloom win from last year. She had not won since the La Brea at Santa Anita in December but finished second in the Ballerina Stakes last out. 4-1 third choice Thunders Dove, winner of 5 straight including the Addison Mallery at Saratoga in her last start.

14-1 Any Limit was quickest away under jockey Cornelio Velasquez getting the first quarter mile in 22.29 before Indian Blessing, who broke slowly, came up to take over the lead on the inside, getting the half in 45.15. Entering the stretch, Sara Louise, who was fourth early, moved up alongside Indian Blessing to challenge, and the pair would battle the length of the stretch. However, Indian Blessing would not yield, holding off Sara Louise by a head in the final strides to get the hard-fought victory in 1:15.29 over the fast main track. It was another 3 1/2 lengths back to 22-1 longest shot Sky Haven third. 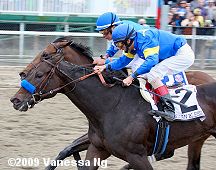 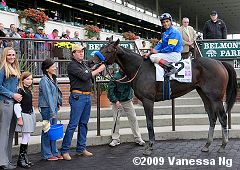 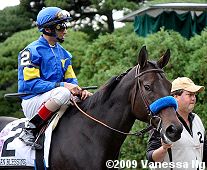 Left: Indian Blessing in the winner's circle. Tonja Terranova, assistant to winning trainer Bob Baffert said, "I think she ran incredibly today. Sara Louise is a really nice filly, but (Indian Blessing) had been training super. Everyone was really confident and she ran her eyeballs out. Bob (Baffert) and Hal (Earnhardt, owner) will have to discuss (the Breeders' Cup). I'm not sure what will transpire, I'm just savoring the moment."

Right: Indian Blessing heads out to the track before the race. She will likely only make one more start in the Breeders' Cup Filly and Mare Sprint before retiring. 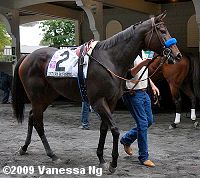 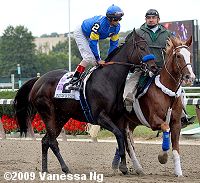 Left: Indian Blessing in the paddock before the race.

Right: Indian Blessing in the post parade. Her jockey John Velazquez said, "She put up a really good fight today. She didn't leave out of there all that well, and I had to use her a little bit to get position. I let her be comfortable, and wait. When the hole opened up, I took the spot, and went on with her. I tell you, the other filly was a brave one, too. She kept coming back to me. The more I asked my filly, the more the other one kept coming back. It was a good effort for both fillies." 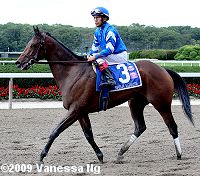 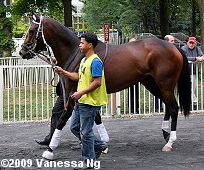 Left: Second place finisher and beaten favorite Sara Louise returns after the race. Rick Mettee, assistant to trainer Saeed bin Suroor said, "I didn't think she'd get beat today, she was training that well. The other filly showed her class." Her jockey Edgar Prado added, "She tried hard; she broke sharp and let the speed go. She was in a good spot, just unfortunately Indian Blessing got through inside. My filly fought real hard, though."

Right: Third place finisher Sky Haven enters the paddock before the race. The 22-1 longest shot raced back in fifth early under new jockey Alan Garcia, came out 4-wide for the drive to pass tiring horses but was no match for the top two, finishing third beaten 3 1/2 lengths. The Steve Asmussen-trained daughter of Sky Mesa out of Woodman mare Shouldn't We All improved her record to 3 wins, 3 seconds, and 2 thirds in 9 starts, earning $203,540 for owner Elite Racing Company. 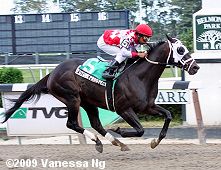 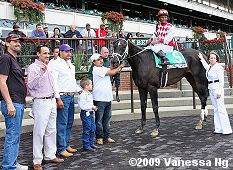 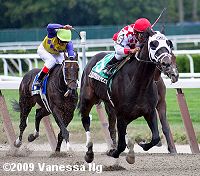 Left: Future Prospect starts to draw off in the stretch.

Right: Future Prospect in the winner's circle. Future Prospect is a 5-year-old gelded son of Freud out of Marshua's Dancer mare Devil's Waltz. With the win, the Michael Maker trainee improved his record to 9 wins, 3 seconds, and 1 third in 20 starts, earning $285,035 for owner Lucille Davis.