The $200,000 Del Mar Mile Handicap (G2) on Sunday features the top older turf milers on the west coast. Conditions were excellent as the 13,171 paying fans enjoyed sunny skies and temperatures in the mid 80's. Frank Kilroe Mile (G1) winner Bowies Hero was sent off as the 15-4 favorite in the field of 10, of his close 4th in the Eddie Read (G2) last out. In to challenge him included 7-2 second choice Sharp Samurai, 2nd in the Eddie Read, and 5-1 third choice Catapult, winner of the Eddie Read.

Jockey Kent Desormeaux sent 45-1 What a View to the lead first time by and he set fractions of 23.25, 46.71, and 1:10.09 while pressed by 9-1 Fly to Mars and stalked by 22-1 Om. Entering the stretch, What a View tired allowing Fly to Mars to inherit the lead through 7f in 1:21.61. However, Catapult, 7th early under Drayden Van Dyke, came out 3 wide for room and rallied to get up by 1/2 a length in 1:33.40 over the firm going. It was another 1 1/2 lengths back to Sharp Samurai third, whose rally was hampered by Fly to Mars drifting out at the 1/16 pole. After a stewards' inquiry, Fly to Mars was disqualified and placed 3rd behind Sharp Samurai for interference in the stretch. 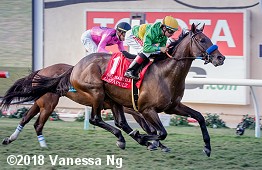 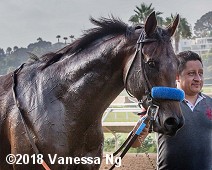 Left: Catapult in the winner's circle. Winning jockey Drayden Van Dyke said, "So special. I had a day up at Santa Anita recently where I won the first four races, including a Grade I, and that was the best. But I think today (five wins) goes past it. I had a good trip and the right horse. It was a little hairy there turning for home; I had to wait for room. But then he got out and just went. Nice horse. I've got a couple more, too, so it may get better yet."

Right: Catapult returns to the barn. Winning trainer John Sadler said, "I'm having a dream meet. We're winning these big races and getting good trips and I can't ask for anything more. What's really nice is all the horses are running well. Everything is working out. I'm very happy with Catapult. He ran a good race in the Eddie Read and I wasn't sure I was going to bring him back here. But I figured that since he's so good on this turf course I wanted to run him twice here. We're hoping he'll end up in the Breeders' Cup Mile." 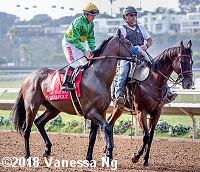 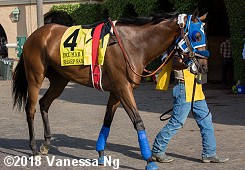 Left: Catapult in the post parade. This was Van Dyke's 5th win on the card. He would go on to win the next 2 races on the card, tying Victor Espinoza's record of 7 wins in one day at Del Mar.

Right: Second place finisher Sharp Samurai in the paddock before the race. Jockey Gary Stevens said, "That (interference by #9, Fly to Mars) not only clost me the place, it cost me the win. I don't think Drayden (Van Dyke on Catapult) is going to get by me if I don't get stopped. My horse was really coming." 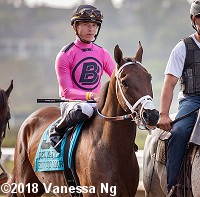 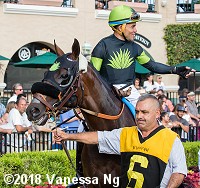 Left: Third place finisher (disqualified from second) Fly to Mars in the post parade. Jockey Tyler Gaffalione said, "You can see it all on the replay."