The Bing Crosby Season at Del Mar continued on Saturday afternoon with the $100,000 Desi Arnaz Stakes for two-year-old fillies sprinting 7 furlongs on the main track, the distaff counterpart to last week's Bob Hope Stakes (G3). Conditions were excellent with sunny skies and temperatures in the mid 60's. After the scratch of Steph Being Steph by trainer Brian Koriner, a short field of 5 faced the starter with Dream Tree sent off as the even money favorite off her debut win by a nose at Santa Anita on October 27. In to challenge her included 2-1 second choice Midnight Bisou, who finished second to Dream Tree in that maiden event, and 5-2 third choice Ms Bad Behavior, winner of a maiden at third asking last out.

Jockey Corey Nakatani sent 11-1 Secret Spice to the lead exiting the chute and she set opening fractions of 22.55 and 45.93 while pressed by Dream Tree and stalked by Ms Bad Behavior. Entering the lane, jockey Drayden Van Dyke sent Dream Tree to the front, and she opened up a 2 length advantage midstretch through 3/4 in 1:10.57. Midnight Bisou, last early under Rafael Bejarano after being bumped at the start, put in a strong rally but Dream Tree held her off by a nose in 1:23.69 over the fast track. It was a long 5 1/4 lengths back to Secret Spice third. 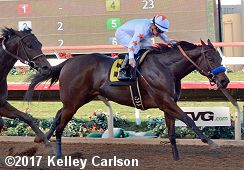 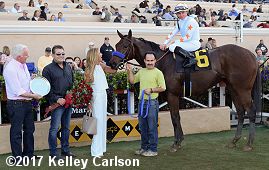 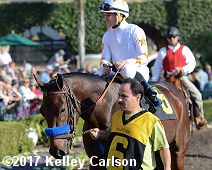 Left: Dream Tree in the winner's circle. Winning jockey Drayden Van Dyke said, "It isn't that she pulls herself up; she just idles a little bit in that last sixteenth. She did it the other day (her first start, a victory at six furlongs Oct. 27 at Santa Anita in a straight maiden race); she did it some again today. They took the blinkers off her today to get her to relax; she was going seven eighths. But she's talented; no doubt."

Right: Dream Tree in the paddock before the race. Jimmy Barnes, assistant to winning trainer Bob Baffert said, "She seems to be improving. We've got to work on the thrilling finishes there (2-for-2 career with both by a nose). We'll see how she comes out and Bob will tell us where we're going next." It is worth noting that this is Baffert's first stakes win of the meet, after failing to win during the Breeders' Cup two weeks ago. 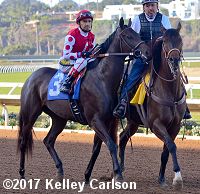 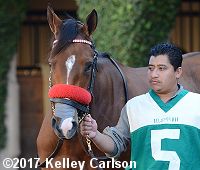 Left: Second place finisher Midnight Bisou in the post parade. Jockey Rafael Bejarano said, "I ran out of racetrack. If I have another jump or two, I think we win. She's just a little green. She only had the one race (a close second in her debut to the winner at Santa Anita on Oct 27). She's getting the experience she needs."

Right: Third place finisher Secret Spice in the paddock before the race. Jockey Corey Nakatani said, "She's quick out of there. I just let her roll. With a 2-year-old, you don't want to discourage their natural ability. She's got that natural speed. She ran good today."