Just a week after the historic Breeders' Cup World Championships at Del Mar, the Bing Crosby Season continued with the $100,000 Bob Hope Stakes (G3) for two-year-olds sprinting 7 furlongs on the main track. Conditions were excellent with cloudy skies and temperatures in the mid 60's, with 7,251 fans in attendance at the seaside oval. Mourinho was sent off as the 6-5 favorite in the field of 6 off his win in the Speakeasy Stakes at Santa Anita. In to challenge him included 9-5 second choice Run Away, winner of the Best Pal (G2) and Barretts Juvenile Stakes but 3rd in the Del Mar Futurity (G1), and 3-1 third choice Beautiful Shot, winner of the Speakeasy.

Jockey Victor Espinoza sent 20-1 Greyvitos to the lead exiting the chute and he set fractions of 22.66 and 45.20 while pressed by Run Away and stalked by Mourinho. Entering the stretch, Greyvitos continued to lead by 1 length through 3/4 in 1:09.56. Kept to task by Espinoza, Greyvitos held on to win gate to wire by 1 1/2 lengths over Mourinho in 1:22.20. It was a long 7 3/4 lengths back to Beautiful Shot third. 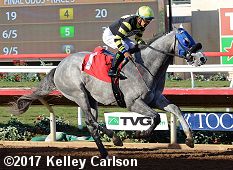 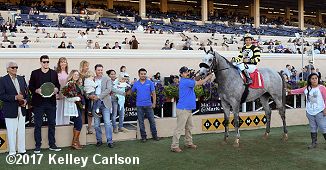 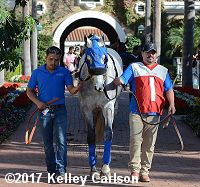 Left: Greyvitos in the winner's circle. Winning jockey Victor Espinoza said, "I knew there was a lot of speed in the race but if I could get the jump on them then I would just go on. The post number one I had to do something. The fractions were pretty quick but when the horse is doing it easy it doesn't matter how fast you go."

Right: Greyvitos in the paddock before the race. Winning trainer Adam Kitchingman said, "I wasn't surprised to see him on the lead. In his last race, he was climbing with the dirt hitting him and so I was okay with him on the lead today. Those were solid fractions and the final time was good. With his pedigree, we figured him for a grass horse and definitely for two turns because he's bred top and bottom for that. And we might run him again on the grass sometime in the future. But he trained so well on the dirt that we wanted to try him on it. I also figured he'd like the 7f. His next race will be the Futurity at Los Alamitos." 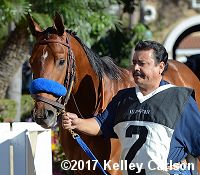 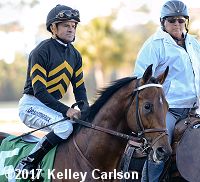 Left: Second place finisher and beaten favorite Mourinho in the paddock before the race. Jockey Drayden Van Dyke said, "We had a great trip, sat right behind the winner, got out and had a chance to run him down but couldn't."

Right: Third place finisher Beautiful Shot in the post parade. Jockey Kent Desormeaux said, "I left him too much to do. The winner was up there running too easy. I could see his ears were up and he was just galloping. My horse fought hard to finish where we did, but the winner was full of run today."