The highlight race on Saturday at Del Mar was the $200,000 Best Pal Stakes (G2) for two-year-olds sprinting 6 1/2 furlongs on the main track. Conditions were excellent with sunny skies and temperatures in the low 70's. Serengeti was sent off as the 6-5 favorite in the field of 8, exiting his 11 length maiden win last out after finishing second in his debut. In to challenge him included 3-2 second choice Run Away, winner of his debut and the Santa Anita Juvenile last out, and 6-1 third choice Fleetwood, 2nd in his debut and looking to break his maiden in stakes company.

Jockey Victor Espinoza sent 32-1 An Ocala Ten to the lead exiting the chute through fractions of 22.13 and 45.10 while pressed by Run Away and stalked by Serengeti and 8-1 Arawak. Entering the stretch An Ocala Ten tired allowing Run Away to inherit the lead, opening up a 4 length advantage midstretch through 3/4 in 1:10.81. Kept to task by jockey Flavien Prat, Run Away cruised to a 3 1/2 length win over late-running 26-1 Dia de Pago in 1:17.91 over the fast main track. It was another 2 1/2 lengths back to Fleetwood third, while Serengeti tired late to finish 6th. 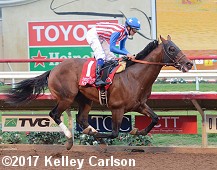 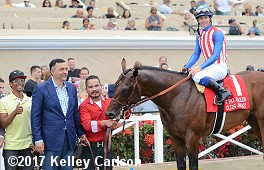 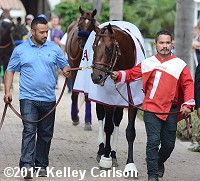 Left: Run Away in the winner's circle. Winning trainer Simon Callaghan said, "I think it was even better than his last race. He's got great gate speed but he isn't one of those horses that is speed crazy. I thought he'd get over this track well. I was a little nervous when he put in a slow breeze (5 furlongs in 1:03.60 a week earlier) when I was in Saratoga. But my team here assured me that it was a good breeze. He's just a cool horse – fast, very mature and I think he's going to get better as we stretch out. The Futurity is next."

Right: Run Away in the paddock. Winning jockey Flavien Prat said, "I knew he'd run well; he'd been training so well. But I didn't really expect to win by that far. Simon has done a great job with him, though, and he's a very talented colt, so maybe we shouldn't be surprised. Can he run farther? We don't know. We know he can run 6 1/2 furlongs, so we'll enjoy that for a while." 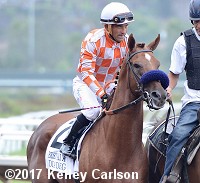 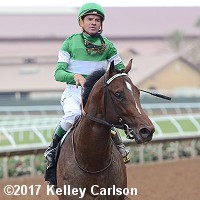 Left: Second place finisher Dia de Pago i in the post parade. Jockey Corey Nakatani said, "He ran dynamite. The 3 horse (Master Ruler) all but eliminated us at the break, but I was able to gather him up and get him back into his rhythm. He came running. Big race for him; he's a talented colt. And he'll like it farther."

Right: Third place finisher Fleetwood returns after the race. Jockey Kent Desormeaux said, "New experience for him today, getting that dirt thrown in his face. Education time. More distance, oh, yeah. He's going to be so much better when they go farther." 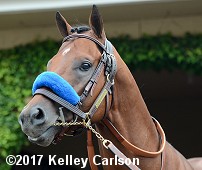 Sixth place finsher and beaten favorite Serengeti in the paddock before the race. The 6-5 choice bobbled at the start then stalked the pace under Mike Smith but tired entering the stretch to finish 6th beaten 10 lengths. The Bob Baffert trainee has a record of 1 win, 1 second, and 0 thirds in 3 starts, earning $43,545 for owners Peachtree Stable and Natalie J. Baffert.