Kentucky Derby Day is the biggest card of racing at Churchill Downs. Before the main event, there were five graded stakes contested over the main track and turf course before the crowd of 151,616, just the 9th largest in history. The relatively "small" crowd was the result of less than ideal conditions, as steady rain fell during the afternoon and temperatures stayed in the low 60's. 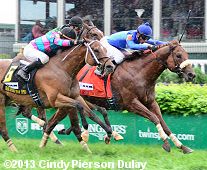 Kicking off the stakes action on Derby day was the $138,250 Twin Spires Turf Sprint Stakes (G3), featuring a field of 8 older horses going 5 furlongs on the turf. Colonel Power and Champion Energy Services Stakes winner Ikon Ike was sent off as the 5-2 favorite over 7-2 Southern Dude, winner of the Bayou St. John, and 9-2 Regally Ready, seventh in the Shakertown (G3) last out. 11-1 Berlino di Tiger and Southern Dude battled for the lead down the backstretch through fractions of 21.85 and 44.55 over the good turf under heavy rain. Entering the stretch, Berlino di Tiger gained the lead for good, and was all out to hold off late-running 8-1 Chamberlain Bridge by a nose in 57.01 seconds. It was another 3/4 length back to Southern Dude third, while favorite Ikon Ike checked in seventh.
Results chart from DRF 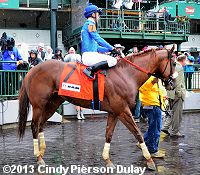 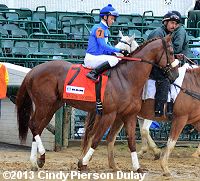 Left: Berlino di Tiger in the winner's circle. Winning trainer Eduardo Caramori added, "He was a champion in Brazil and we were real disappointed his first couple races (in the United States). The thing is, he was running straight in Brazil, never turning. Always 5/8 straight. Sometimes horses just need a few races to adapt to the races in America. And the soft turf helped, too. He was running on soft turf in Brazil. We talked to the former trainer in Brazil and the former vets and we think we got it right today. We may run in the race on Preakness weekend (Jim McKay Turf Sprint) but maybe it's too close."

Right: Berlino di Tiger in the post parade. Jockey Leandro Goncalves said, "Eduardo told me before the race that this horse had a good record in Brazil, and that he worked like a good horse but had a breathing problem. He said just break and ride like he'd been ridden in Brazil. Just see it, let him get comfortable, don't fight him. And it worked out pretty good. I got pressured a little bit from the one horse but he was able to handle it. I never thought he was going to get that close. He kind of scared me." 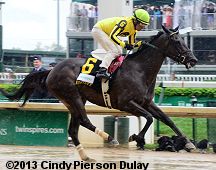 The first Grade 1 event on the card is the $345,600 Humana Distaff Stakes (G1), featuring older fillies and mares sprinting 7 furlongs on the main track. Inside Information Stakes (G2) winner Aubby K was sent off as the 7-2 favorite in the field of 9 over 4-1 Jamaican Smoke, third in the Madison (G1) last out, and 9-2 Byrama, second in the Madison. Jockey Julien Leparoux sent Jamaican Smoke to the lead down the backstretch and she set fractions of 22.40 and 45.31 over the sloppy track while stalked by Aubby K to her outside. Entering the lane, Aubby K gained the lead, getting 3/4 in 1:09.60, and drew off to win by 1 1/2 lengths over late-running 8-1 Burban in 1:22.93. It was another neck back to 17-1 longest shot Holiday Soiree third.
Results chart from DRF 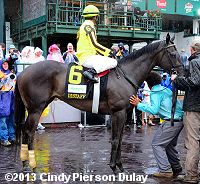 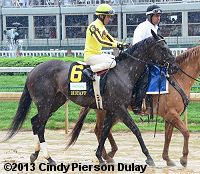 Left: Aubby K in the winner's circle. Winning jockey Edgar Prado said, "That filly's got a great running style. She's great out of the gate; you put her in contention and she does her thing. She's a pretty easy horse to ride. I guess she handled the track really well.It was kind of hard to know because she never ran on that kind of track. She handled it really well. She was running hard. When she got to the lead and starting looking around a bit, but she was really good today."

Right: Aubby K in the post parade. Notice it was pouring rain. Trainer Ralph Nicks said, "She's such a good horse she just keep overcoming everything. She's such a stalker and has the turn of foot, she can press if she needs to or set off. It works well for her." 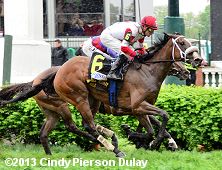 The $288,750 Churchill Distaff Turf Mile Stakes (G2) featured a field of 8 older fillies and mares going 1 mile on the turf. Last year's winner Hungry Island was sent off as the 2-1 favorite off an allowance win at Keeneland, over 3-1 second choice Daisy Devine, second in the Jenny Wiley (G1) last out, and 4-1 Stephanie's Kitten, unraced since finishing 6th in the Queen Elizabeth II Challenge Cup (G1) in October. 19-1 longest shot Frontside was sent to the lead and set fractions of 24.29 and 49.15 while stalked by 7-1 Stopshoppingmaria. On the far turn, Daisy Devine took over the lead getting 3/4 in 1:13.81. However, Stephanie's Kitten, last early, came on late to gain the front at the 3/16 through 7/8 in 1:25.78, and outfinished late-running favorite Stephanie's Kitten by a head in 1:37.94 over the yielding turf.
Results chart from DRF 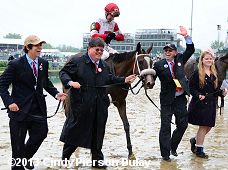 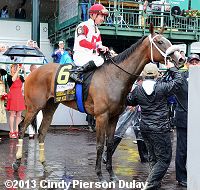 Left: Stephanie's Kitten is led to the winner's circle by owner Ken Ramsey, trainer Wayne Catalano, and Ramsey's grandchildren. Winning jockey Julien Leparoux said, "She finished the last quarter very good. I think the ground is good for us today. The way she won, it was perfect."

Right: Stephanie's Kitten in the winner's circle . Trainer Wayne Catalano added, "I was very confident going in I had her fit, She worked very well, she did everything I wanted to do. We were a little concerned with the track; she's won on a good track. How soft it was was a little bit of a concern, but not much when you got a good horse like that." 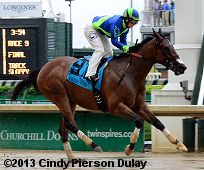 The $443,600 Churchill Downs Stakes (G2) features older horses sprinting 7 furlongs on the main track. Duncan F. Kenner Stakes winner Delaunay was sent off as the 9-5 favorite over 7-2 second choice Unbridled's Note, second in the Potrero Grande (G2) last out, and 5-1 third choice Hierro, third in an allowance at Gulfstream Park in March. 6-1 Trinniberg battled for the lead with Delaunay down the backstretch through fractions of 22.29 and 44.86 over the sloppy surface while stalked by 17-1 Laurie's Rocket. In the stretch, Trinniberg tired badly as Delaunay inherited a 4 1/2 length lead through 3/4 in 1:09.08, and finished under wraps 4 lengths in front of late-running 10-1 Pass the Dice in 1:22.35. It was another 2 1/2 lengths back to Laurie's Rocket third.
Results chart from DRF 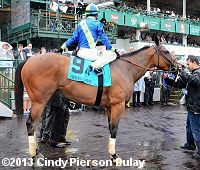 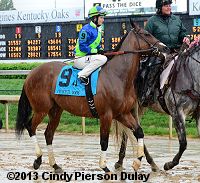 Left: Delaunay in the winner's circle. Winning trainer Tom Amoss said, "The question was fair; Delaunay had faced the same group of horses, but today was a really overpowering performance. I think you'd have a lot of doubt not calling him the best sprinter in the country after today. By far, it's the best claim I ever made. I saw a horse that I thought that was worth $40,000, which is what I paid. What's different? I really don't know. He's just come around and he looks great. He doesn't look like a $40,000 horse, that's for darn sure."

Right: Delaunay heads out for the post parade. Winning jockey Rosie Napravnik said, "The post position was great. He broke sharp. He's such a cool horse. He'll do whatever you ask him. He's very speedy and he'll relax if you need him to. He's just a very fast horse. Since Tom's had him, he's really come around. The track wasn't a problem at all for him. He's got a good record on wet tracks. We weren't worried about that." 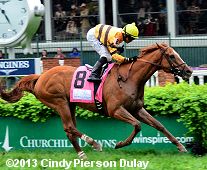 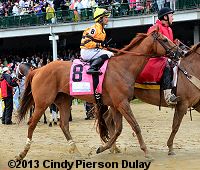 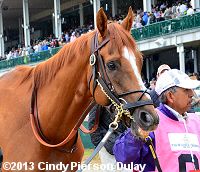 Left: Wise Dan returns after the race. Winning trainer Charlie LoPresti said, "I could see he was having trouble getting hold of (the yielding course) down the backside. I told Lezcano the most important thing is to make sure he's handling it good and to take care of him and save him until you really need to run as long as he's getting a hold of it and he did perfect. He never hit him, because that's what I told him. A lot of people said he should've gone to Dubai or he shouldn't have been a 3-time Eclipse Award winner. He had to come back and redeem himself and I think there's no doubt after today that he's the same horse that we put away after the Breeders' Cup. He won't run again until Saratoga."

Right: Wise Dan heads over to the paddock before the race. Jockey Jose Lezcano said, "He responded like a champion today. He responded very well when I asked him for run.  I had a perfect trip and he felt very comfortable out there. Last time, I had to keep him closer to a slow pace and today I was able to relax him on the backside."