Although the Delaware Handicap was the main event, there were three other stakes on the undercard. The biggest of these was the $300,000 Leonard Richards Stakes (G3) featuring 3-year-olds going 1 1/16 miles on the main track. The favorite was Little Cliff who was coming off an allowance win at Delaware and a 3rd place finish in the Sir Barton Stakes on Preakness Day, but with only six horses in the field, nobody went off at very long odds.


Throng set the early pace with favorite Little Cliff close behind. After six furlongs in 1:11.41, Throng began fading back to finish fifth while 9-2 third choice Awfully Smart, who sat at the back of the pack early, began to make his move. He came up along the outside on the far turn, taking over the lead in mid stretch and then drawing away to an easy 5 1/2 length win over 4-1 second choice Ah Day in a time of 1:43.23. It was another 3 3/4 lengths back to even-money favorite Little Cliff in third. 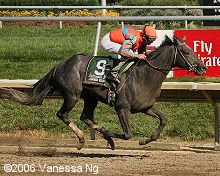 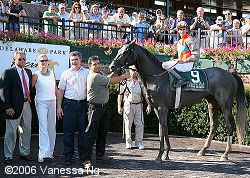 Awfully Smart in the winner's circle. Winning jockey Ramon Dominguez said, "I really did not want to be three wide, like I was, but the horse proved to be good enough to do so. He is a pretty nice horse." 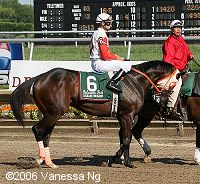 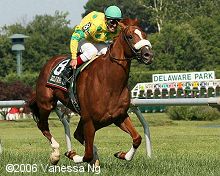 Ten older horses went to post in the $200,000 Caesar Rodney Stakes at 1 1/8 miles on the turf. 7-1 fifth choice Fishy Advice broke sharply and went on to lead every step of the way, drawing off in the stretch to win by 3 1/4 lengths over 25-1 shot Capitano in 1:50.72 over the "good" course. Capitano was just a nose in front of 8-1 Foufa's Warrior, while 7-5 favorite Icy Atlantic was fourth.
Results chart 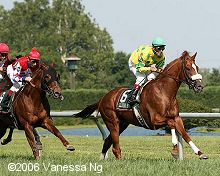 First time by with Fishy Advice leading the way over Capitano. They stayed that way the entire race, although Fishy Advice drew off to a decisive win. 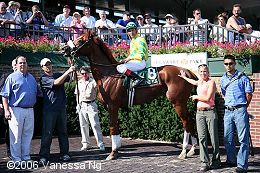 Fishy Advice and his connections in the winner's circle after the Caesar Rodney Stakes. 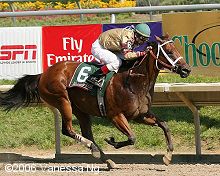 Kicking off the stakes action on Sunday was the $97,000 Light Hearted Stakes for older fillies and mares sprinting six furlongs. Only 4 went in this event, with 5-2 second choice Miss Elsie stalking the pace of 2-5 favorite Trickle of Gold the whole way around, then taking over in the final furlong to win going away by 2 lengths over That's Our Song in 1:09.97. Trickle Of Gold weakened badly at the 1/16 pole to finish last and was vanned off.
Results chart 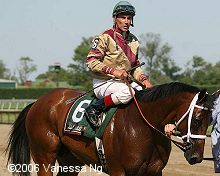 A very sweaty Miss Elsie and jockey Mario Pino return after the race. It was brutally hot on Sunday at Delaware Park. 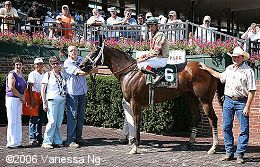 The happy connections in the winner's circle with Miss Elsie.