The $1 million Canadian Trotting Classic is the richest race in Canada for 3-year-old trotters. A field of 10 lined up behind the starter on a chilly Saturday night at Mohawk Racetrack in Campbellville, but the eyes of the racing world were on the 1-10 favorite Muscle Hill, coming into the race looking unstoppable with 16 straight wins including a new world record time in last year's Breeders Crown 2-Year-Old Trot and a world record equaling time in the prestigious Hambletonian this year. Before his elimination win here, he won both the American National at Balmoral and the World Trotting Derby at DuQuoin. Because of his short odds, show wagering was not offered. In to challenge the son of Muscles Yankee included 8-1 second choice Judge Joe, winner of the Yonkers Trot and second in his elimination heat, and 9-1 third choice Southern Rocketop, who finished second behind Muscle Hill at DuQuoin before defeating Judge Joe in the elimination.

Driver David Magee sent Southern Rocketop to the lead first time past the stands through an initial quarter mile in 26 2/5, with 26-1 Explosive Matter second. Down the backstretch, driver Brian Sears hustled Muscle Hill to the lead on the outside, and he charged to the front opening up a 1 1/2 length advantage through a half in 56 2/5. Turning for home, Muscle Hill was already pulling away from the field, opening up by 2 1/2 lengths on Southern Rocketop through 3/4 in 1:25. At the 1/8 pole, Muscle Hill was 4 1/2 lengths in front and cruised under the line under wraps in a time of 1:53 1/5 over the fast track. Explosive Matter finished second, 2 1/4 lengths in front of the tiring Southern Rocketop third.

The $500,000 winner's share of the purse pushed Brian Sears above the $100 million (U.S.) in lifetime purse earnings. Only seven other drivers in history have reached that mark, led by John Campbell (the only driver to top $200 million), followed by Mike Lachance, Ron Pierce, Cat Manzi, David Miller, Luc Ouellette, and Jack Moiseyev. Driver Steve Condren is about $500,000 away and Tony Morgan $800,000 away from reaching $100 million. 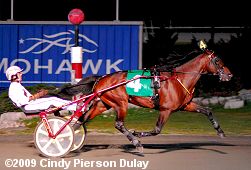 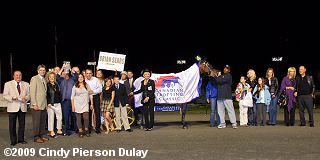 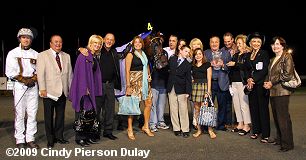 Muscle Hill in the winner's circle with his huge group of connections. Trained by Nova Scotia native Gregory Peck, Muscle Hill was bought for $55,000 as a yearling and has now earned over $2.7 million for owners Jerry Silva, TLP Stable, Southwind Farm, and Muscle Hill Racing, including $500,000 from this win. 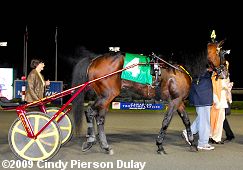 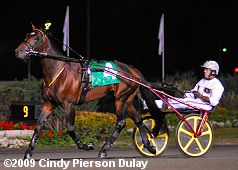 Left: Muscle Hill heads to the winner's circle with steam rising form his back.

Right: Muscle Hill in the post parade. His driver Brian Sears said, "It feels fantastic. What a great feeling. He's a very special horse. They just don't come around like him very often. He's by far the best horse I've ever driven. One of my main concerns was I didn't want to get 3 deep and parked. So I let everybody settle in and when I moved him, he responded very well. He's been doing what he's been doing all along. He stuck to his work. He was fantastic. I feel very lucky to drive a horse like that." 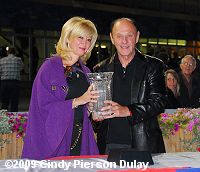 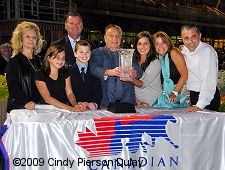 Several groups of his connections posed with the trophy after the race. On the left is co-owner Jerry Silva and his partner Theresa. I don't know who everyone is on the right, but trainer Greg Peck is second from the left behind the kids and co-owner Lou Pontone is on the far right. 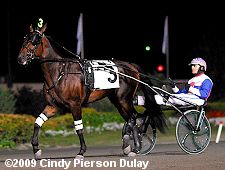 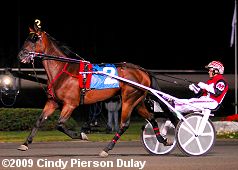 Left: Second place finisher Explosive Matter in the post parade. The 26-1 outsider sat third 3 1/2 lengths off the pace most of the way with driver Ron Pierce, then passed Southern Rocketop in the final furlong to get second beaten 3 1/2 lengths. The Mike Vanderkemp-trained son of Cantab Hall out of Muscles Yankee mare Fireworks Hanover improved his record to 9 wins, 4 seconds, and 1 third in 15 starts, earning $1,353,193 for owner-breeder Adam Victor and Son Stable.

Right: Third place finisher Southern Rocketop warms up before the race. The 9-1 third choice led for the first 3/8 mile with driver David Magee until being passed by Muscle Hill on the backstretch, tiring late to finish third beaten 5 3/4 lengths. The Robert Taylor-trained son of Psychic Spirit out of the Donerail mare Summer in the City improved his record to 17 wins, 5 seconds, and 1 third in 28 starts, earning $574,976 for owner Powers Farms LLC.