On the undercard of the Cigar Mile are two races for the 2-year-old divisions. The $200,000 Remsen Stakes (G2) featured a field of six 2-year-olds going 1 1/8 miles on the main track. Court Vision, winner of the Iroquois at Churchill Downs in his last start, was sent off as the 4-5 favorite over 5-2 second choice Big Truck, third in the Sleepy Hollow after winning the Bertram F. Bongard, both at Belmont Park. 5-1 Atoned, second in the Dover at Delaware after winning the Continental Mile at Monmouth, was the third choice on the board.

20-1 Tide Dancer was loose on the lead early, setting a pace of 24.33, 49.15, and 1:14.49 while as many as 2 lengths ahead of 7-1 Springs Road. Favorite Court Vision raced close to the pace saving ground around both turns. The pacesetters both tired entering the stretch, as Atoned, who raced in fifth early, rallied three wide on the far turn and opened up a 3 length lead in mid stretch. However, Court Vision angled out wide entering the stretch and closed with a rush to get up by a neck in 1:52.48 over the fast track. It was a long 4 1/4 lengths back to 31-1 longest shot Trust N Dustan in third. There was a brief inquiry into the stretch run, as Court Vision bumped eventual fourth place finisher Big Truck and third place finisher Trust N Dustan, but the result was allowed to stand. 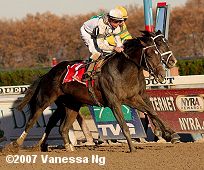 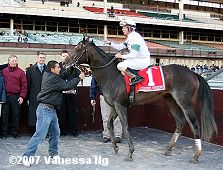 Court Vision in the winner's circle with trainer Bill Mott on the left. Mott said, "He had to work his way out and bully his way out. This horse has been all about courage. He finished so strong once he got clear. He's got a bright future." 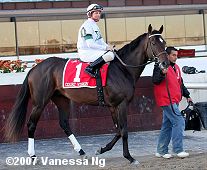 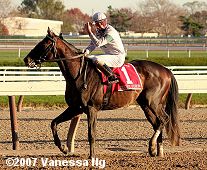 Left: Court Vision heads out for the post parade.

Right: Court Vision returns after the race. His jockey Eibar Coa said, "I was getting bounced all over from the 5/16 pole to the 3/16 pole. He fought back and pushed them out because they were trying to push him in. To overcome that, you saw the way he kicked. He was just much the best." 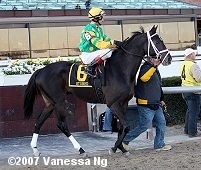 Second place finisher Atoned leaves the paddock. Seth Benzel, assistant to trainer Todd Pletcher said, "I can't say enough about the horse's effort. To almost go to his nose coming out of the first turn, and fight on like that and lose by a head, it's just an unbelievable effort."

His jockey John Velazquez said, "He clipped heels (with Big Truck). I thought I was falling off; I don't know how I stayed on. He ran a great race after falling to his knees. That was a tough way to lose." 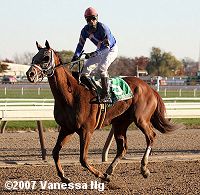 Third place finisher Trust N Dustan returns after the race. The longest shot on the board raced at the back of the field early under jockey Cornelio Velasquez, rallied four wide on the far turn but was no match for the first two. He improved his record to 2 wins and 1 third in 6 starts, earning $67,972 for trainer, co-owner, and co-breeder Stanley Hough.

The filly counterpart to the Remsen is the $200,000 Demoiselle Stakes (G2) for 2-year-old fillies at 1 1/8 miles on the main track. Tempted Stakes winner Elusive Lady was sent off as the 5-2 favorite over 7-2 second choice Expect the End, winner of three straight New York-bred stakes races including the Maid of the Mist last time out. 4-1 Melissa Jo, winner of a maiden event at Belmont last out, rounded out the top three on the board.

7-1 Be Fruitful led the field around the clubhouse turn through a quarter in 23.35 and a half in 47.81. At the end of the backstretch, favorite Elusive Lady, who raced back in fifth early, moved up on the outside to take over the lead as the early pacesetter tired and faded to eventually finish last. Elusive Lady led the field into the lane but 9-2 Mushka, who was outrun early, came out four wide on the far turn and easily passed the favorite at the 3/16 pole. Mushka drew away in the final furlong to win by 4 1/2 lengths in 1:51.61. It was another 3 1/4 lengths back to Melissa Jo in third. 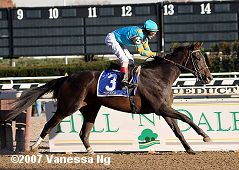 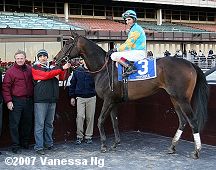 Mushka in the winner's circle with trainer Bill Mott on the left. Mott said, "Johnny (Velazquez) said she had a little bit of a mind of her own today. She didn't want to go early. When she decided to go, she pretty much did it on her own. She'll go next week to Florida and we'll freshen her up a little." 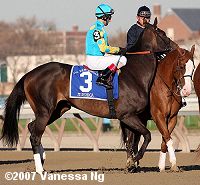 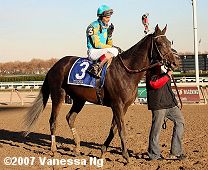 Left: Mushka in the post parade. Her jockey John Velazquez said, "Once she gets serious, she gets serious. We got to the lead a little early, so I wanted to keep her mind on running. I hit her once and she got back on her left lead, then she went on again and galloped out good. That was very impressive, but the first part, I didn't know what I was going to do. Once she got to the backstretch, she said, Okay, now I'm ready." 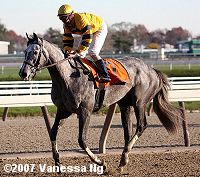 Second place finisher Elusive Lady returns after the race. Her trainer John Kimmel said, "It looked like she took the worst of it going into the first turn. The winner is obviously a nice filly, but she benefited from a group of horses going at a fast pace. Eibar did what he could going into the first turn; she was very sharp. She grabbed a quarter pretty good; she might have done that at the break. It really wasn't an ideal trip for her today."

Her jockey Eibar Coa said "I thought she ran good. She ran hard every step of the way and put away all of the speed horses. She just got tired late." 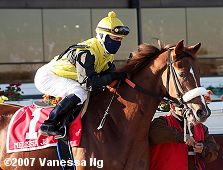 Third place finisher Melissa Jo heads out of the paddock. The 4-1 third choice saved ground around both turns under jockey Norberto Arroyo Jr., settling in fourth down the backstretch but had no response when asked, holding third place beaten 8 lengths but finishing 10 lengths ahead of the rest of the field. The daughter of Fusaichi Pegasus improved her record to 1 win, 1 second, and 1 third in 3 starts, earning $61,600 for owners Philip Birsh and William Gildin.

Back to the Cigar Mile and Discovery Handicap results and photos