The last major stakes race of the year in New York is the $300,000 Hill N Dale Cigar Mile (G1), a handicap for older horses going 1 mile around 1 turn of the main track at Aqueduct, before just 4,712 spectators on a chilly but sunny Saturday afternoon. Only five went to post after the two-horse entry of Diamond Isle and City Attraction scratched. Midnight Lute, winner of two straight Grade 1 races including the Forego at Saratoga and the Breeders' Cup Sprint, was sent off as the 1-2 favorite over 2-1 second choice Daaher, also coming off a 2 race win streak, in an allowance and then the Jerome Handicap. 9-1 Xchanger, runner-up in the Pennsylvania Derby but a distant sixth in the Breeders' Cup Dirt Mile last out, rounded out the top three on the board.

Jockey Mike Luzzi sent Daaher to the lead right away and he set quick fractions of 23.10 and 46.32 while about 2 lengths clear of Xchanger who stalked him in second. Midnight Lute was unhurried back in fourth for the backstretch run. Entering the stretch, Luzzi asked Daaher to open up and he did, opening up a 2 1/2 length advantage at the 1/8 pole. When asked by Garrett Gomez, Midnight Lute circled the field three-wide on the turn but was left with too much ground to make up, as Daaher cruised under the line 2 1/2 lengths clear in a time of 1:33.79 over the fast track. It was a long 4 1/4 lengths back to 22-1 longest shot Naughty New Yorker in third.

Also on the card Saturday were the Remsen and Demoiselle Stakes for the 2-year-olds. Get the results and photos for those races here. 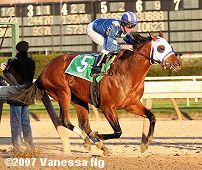 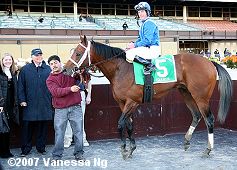 Daaher in the winner's circle. His trainer Kiaran McLaughlin said, "He's turned out to be a good horse. Hopefully, we can take him over to Dubai for either the Godolphin Mile or the World Cup. It worked out well that we didn't have anyone pressuring us. Midnight Lute is a very nice horse. We were lucky there was no one to take us on. The pace wasn't very fast for him. The rider had a double handful. He had so much horse. Once Midnight Lute got to us and we went on, I thought we had him." 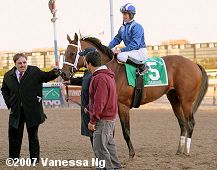 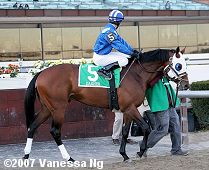 Right: Daaher heads out of the paddock for the post parade. His jockey Mike Luzzi said, "He's got a short little neck, so you can only take one hold of him. That's the hold you got. I still had horse turning for home. He kicked for me and there was plenty left. He can run, there's no question about it. I was happy about the scratches, too." 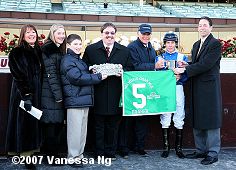 The trophy presentation for the Cigar Mile with trainer Kiaran McLaughlin in the center and Shadwell racing manager Rick Nichols between him and jockey Mike Luzzi. 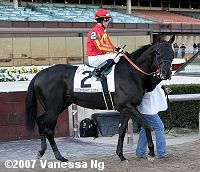 Second place finisher and beaten favorite Midnight Lute heads out for the post parade. His trainer Bob Baffert said, "He ran second. The horse that won, he's a really good horse. We're still learning about this horse. He wanted to go and Garrett was waiting and waiting. We learned today to let him do his thing. We'll freshen him up and get him ready for something. All I know is that he got beat and there is nothing we can do about it."

His jockey Garrett Gomez said, "I was kind of in-between with him because if he makes the lead too easy, his ears go 'Boink!' and he pulls himself up. I tried to time it just right. When I got to the leader, I still had a lot of horse. The other horse just kept kicking and my horse flattened out at the 1/8 pole." 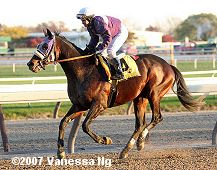 Third place finisher Naughty New Yorker returns after the race. The New York-bred raced at the back of the field after a rough start, moved up along the rail under jockey Javier Castellano but was no match for the first two. The Patrick Kelly trainee improved his record to 10 wins, 6 seconds, and 7 thirds in 39 starts, earning $875,639 for owner Fox Ridge Farm.


The first stakes race on Saturday was the $100,000 Discovery Handicap (G3) for 3-year-olds going 1 1/8 miles on the main track. Pegasus Stakes runner-up Now A Victor was sent off as the 2-1 favorite over 3-1 Helsinki, fourth in the Pegasus after finishing third in the Brooklyn and Travers. 7-2 Buffalo Man, winner of the Ocala Breeders Sales Championship, rounded out the top three on the board.

6-1 Shopton Lane took the lead on the clubhouse turn and set fractions of 25.08, 49.11, and 1:12.88 while one length ahead of Now A Victor who stalked him in second the whole way. Entering the stretch, jockey John Velazquez asked Now A Victor for run and got it as the favorite easily passed the pacesetter, drawing away late to win by 1 1/4 lengths in 1:50.15. It was just a neck back to late-running 5-1 Dr. V's Magic in third. 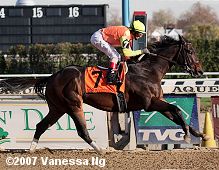 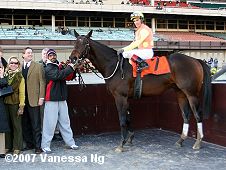 Now a Victor in the winner's circle. His trainer Michael Trombetta said, "I didn't get him until this summer. He might have had some minor injuries or he was just so big, they gave him some time. He is as nice looking a horse as you might want to have. He is still learning. He's gotten to this point pretty quick: from a maiden special at Saratoga to winning a Grade 3 race in a handful of starts. This is only his second start going two turns. I don't know whether he will go to Florida or say here." 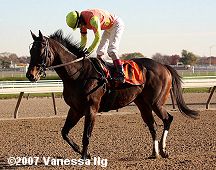 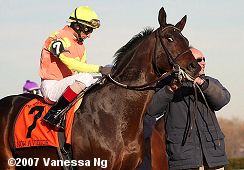 Left: Now a Victor returns after the race. His jockey John Velazquez said, "He's very nice. He's a little immature, but he's a big, beautiful horse. This is his second start going two turns and he handled it very well."

Right: Now a Victor heads for the starting gate looking a bit wild-eyed. 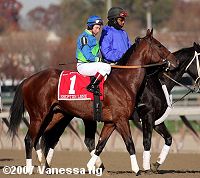 Second place finisher Shopton Lane warms up before the start. The 6-1 shot set the pace early under jockey Chuck Lopez but was no match for the winner. The Bruce Levine trainee improved his record to 6 wins, 1 second and 1 third in 11 starts, earning $138.046 for owner Maggi Moss. 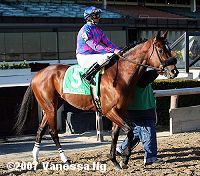 Third place finisher Dr. V's Magic heads out from the paddock for the post parade. The 5-1 shot was bumped at the start, moved up along the inside under jockey Eibar Coa, altered course to the outside in the stretch but finished a neck short of second. The Dominic Galluscio trainee improved his record to 3 wins, 1 second, and 4 thirds in 10 starts, earning $284,510 for owner-breeder Majesty Stud.

On to the Remsen and Demoiselle results and photos