The last graded stakes race of the Belmont Park spring meeting is the $300,000 Coaching Club American Oaks (G1), which is also the final leg of the New York Triple Tiara series. Just five 3-year-old fillies (but only 4 betting interests) entered this 1 1/4 mile main track feature, with the two-horse Godolphin Racing entry of Music Note and Little Belle sent off as the heavy 3-10 favorite. Music Note, who drew the outside post, entered the race off a three race winning streak including the Mother Goose last time out, while stablemate Little Belle, out of post 2, won the Busher at Aqueduct and the Ashland at Keeneland before finishing second to Proud Spell in the Kentucky Oaks in her last start for previous trainer Kiaran McLaughlin. In to challenge the Saeed bin Suroor-trained entry, were Dogwood Stakes winner Acoma at 5-2, Mother Goose and Susan's Girl third place finisher Never Retreat at 9-1, and Flaming Stew at 20-1, making her stakes debut but winless since breaking her maiden at Turfway in March.

Never Retreat went to the lead under new jockey Mike Luzzi and was soon joined by Flaming Stew to her outside, as the pair battled on the front end through fractions of 24.19, 48.18, and 1:13.01. On the far turn, Never Retreat tired and dropped out of contention to eventually finish last, while Music Note, three-wide and last down the backstretch, easily moved up to pass Flaming Stew at the 1/4 pole, getting the mile in 1:37.49. Little Belle, who was fourth early, chased her stablemate into the stretch but Music Note was long gone. Music Note opened up a 6 length lead at the 1/8 pole and continued to widen the gap late, cruising under the line 11 lengths ahead of Little Belle, completing the 1 1/4 mile trip in 2:01.66 over the fast main track. It was another 6 3/4 lengths back to Flaming Stew third. 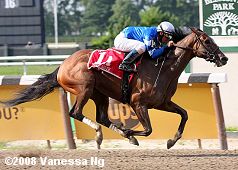 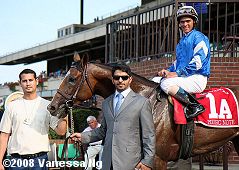 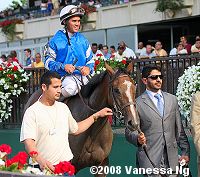 Left: Music Note takes her walk down Victory Lane after winning the Coaching Club American Oaks. Winning trainer Saeed bin Suroor (leading her in the gray suit) said, "She has really improved from her last race. She showed a different class than the rest of them. I told the jockey to keep her nice and relaxed. She looked like she was stronger than her last race. The plan is to take her to the Alabama." 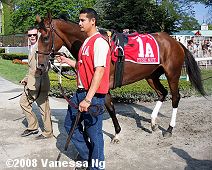 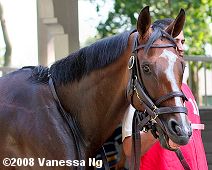 Music Note in the paddock before the race. Winning jockey Javier Castellano said, "She has a long, beautiful stride. She sat just where I wanted her. At the 1/4 pole, when I asked her, she just took off. I know it was a small field and looked impressive, but she did it the right way. She does everything the right way. I was impressed when I rode her last year. This year, she is more mature. She's grown up. When I peeked back at the 5/16 pole, I was looking for Little Belle, because I thought she was the main competition." 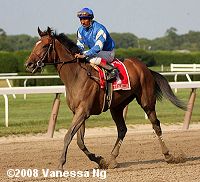 Second place finisher Little Belle returns after the race. Her trainer Saeed bin Suroor said, "Little Belle had not run since May and she needed the race. This race will set her up for her next race. Both of them will go to the Alabama." Regular rider Rajiv Maragh kept her under a firm hold on the outside the whole way, passing the tiring pacesetters on the turn to get second money. The daughter of A.P. Indy improved her record to 3 wins, 3 seconds, and 1 third in 8 starts, earning $579,395 for owner Godolphin Racing LLC. 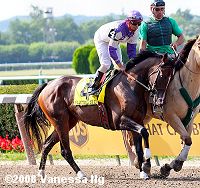 Third place finisher Flaming Slew in the post parade. The 20-1 longest shot on the board stalked the pacesetter on the outside early under new jockey Eibar Coa, then gave way after a mile but held on to finish third in her stakes debut, beaten 18 lengths. The Niall O'Callaghan trainee improved her record to 1 win, 1 second, and 5 thirds in 9 starts, earning $70,289 for owners William Teinowitz and Marco Bommarito.