The first Saturday of the delayed Belmont Park spring meeting featured 4 graded stakes, conducted with no spectators under mostly cloudy skies with heavy rain passing through late in the card and temperatures in the low 80's. The highlight race was the $250,000 Runhappy Carter Handicap (G1), a 7 furlong main track sprint for older horses looking for automatic entry into the Breeders' Cup Sprint. After 3 scratches, 2019 Kentucky Derby (G1) 13th place finisher Vekoma was sent off as the 8-5 favorite in the field of 8 off his win in the Sir Shackleton at Gulfstream Park. In to challenge him included 5-2 second choice Network Effect, winner of the Big Drama, and 3-1 third choice Mind Control, winner of the Tom Fool Handicap (G3).

Jockey Kendrick Carmouche sent 16-1 American Anthem to the front exiting the chute through fractions of 22.38 and 45.02 over the sloppy track while pressed by Vekoma and stalked by 9-2 fourth choice Firenze Fire. Turning for home, jockey Javier Castellano sent Vekoma 4 wide and he easily took over through 3/4 in 1:08.83. Kept to task by Castellano, Vekoma drew off to win by 7 1/4 lengths over late-running Network Effect in 1:21.02. It was another 1 1/4 lengths back to pacesetter American Anthem third. 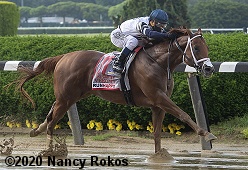 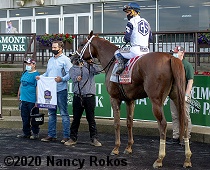 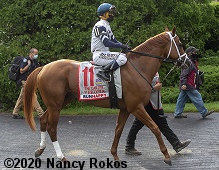 Left: Vekoma in the winner's circle. Winning trainer George Weaver said, "It's just so nice to have a horse this good. He's always been a special horse. I'm just grateful he's in my barn to be honest. I think off that effort, we'll look at the Met Mile. If we can get him back in four weeks and if he's doing well, we'll think about it. He's such a special horse and he's one of those horses that will do things that you may not think are ideal for him. He's just that good. I've never had a horse with this much talent and determination in him. He just knows what he is."

Right: Vekoma leaves the paddock before the race. Winning jockey Javier Castellano said,  "He's a really nice horse. I really like the way he did it today. The way he handled the track today was amazing. I didn't have any concern before the race because I rode him in the slop in the Kentucky Derby and he loved it, a mile and a quarter was just too far. He cut back in distance and we got what we were looking for today." 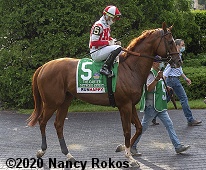 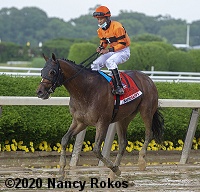 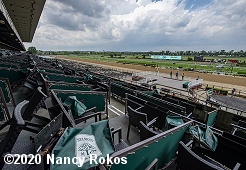 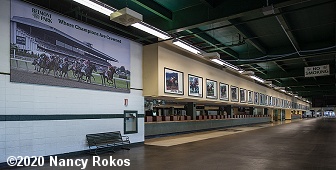 The empty grandstand at Belmont Park. Due to the COVID-19 pandemic, racing in New York was shut down March 20 during the Aqueduct meeting after a worker tested positive. With many major stakes postponed or cancelled, racing resumed at Belmont Park on Wednesday June 3, with the Belmont Stakes moved to Saturday June 20 and reduced to 1 1/8 miles. Unfortunately, until further notice racing will be conducted "behind closed doors" with no spectators and only a very small number of outside media allowed to cover the racing, including Belmont Stakes day. 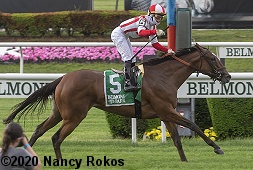 The $100,000 Intercontinental Stakes (G3) featured a field of 10 older fillies and mares sprinting 7 furlongs on the Widener turf course. Newspaperofrecord, unraced since finishing 9th in the Belmont Oaks Invitational (G1) last July, was sent off as the 6-5 favorite over 3-1 Significant Form, 7th in the Matriarch (G1) at Del Mar, and 6-1 Regal Glory, 6th in the Queen Elizabeth II Cup (G1) at Keeneland in October.

Jockey Irad Ortiz Jr. sent Newspaperofrecord to a clear lead down the backstretch through fractions of 22.39 and 45.38 over yielding going while stalked by Regal Glory and 17-1 Jakarta. Turning for home Newspaperofrecord continued to lead through 3/4 in 1:09.72, drawing off late to win by 4 lengths over Regal Glory in 1:22.71. It was another 2 1/4 lengths back to late-running Significant Form third, completing an all-Chad Brown trifecta. 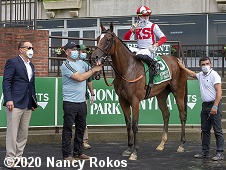 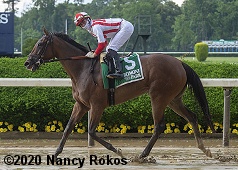 Left: Newspaperofrecord in the winner's circle. Winning trainer Chad Brown said, "She is back. She ran brilliantly. I wanted to see her back in the winner's circle off a brilliant effort, and she did that. She was up on the pace a little stronger than I had anticipated, but it was a great effort. I hope she comes out of it well. I wasn't looking to really let her rip off fractions like that, knowing I have to get her out to a mile next time and on short rest in the Just a Game. I have a little something to work with there, but she's a top-class horse and we'll let her tell us if she's ready to run back in that timeframe. if so, it would be terrific. If she needs more time, we're always going to do right by her."

Right: Newspaperofrecord returns after the race. Winning jockey Irad Ortiz Jr. said, "She broke so sharp and was nice and quiet. She went fast but she kept going. She liked it soft too. She's three-for-three on the soft turf now, so I think she appreciates it. She was a little more relaxed than last year. Hopefully, she will keep improving." 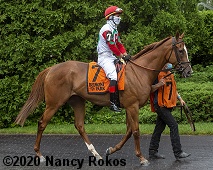 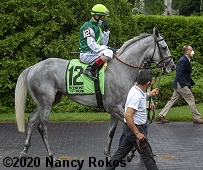 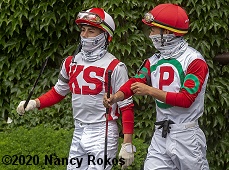 The Ortiz brothers, Irad (left) and Jose, enter the paddock before the race on their way to finishing first and second for trainer Chad Brown aboard Newspaperofrecord (Irad) and Regal Glory (Jose). 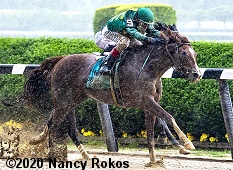 The $100,000 Westchester Stakes (G3) featured a field of 9 older horses going 1 1/16 miles around one turn of the main track. This is the race where the rain moved in, and it was pouring during the running. Breeders' Cup Classic (G1) 7th place finisher Code of Honor was sent off as the 5-4 favorite over 3-1 Endorsed, 5th in the Santa Anita Handicap (G1), and 7-2 Payne, winner of 3 straight allowance races.

110-1 longest shot Prendimi was quickest away through an opening quarter of 22.8 before Endorsed and jockey Joel Rosario took over through a half in 46.73 and 3/4 in 1:11.03 over the muddy track. In the stretch Endorsed continued to lead through 1 mile in 1:36.01 but favorite Code of Honor, 6th early under John Velazquez, came out 4 wide for room and rallied to win by 1/2 a length in 1:42.39. It was a long 6 lengths back to late-running 60-1 Forewarned third. 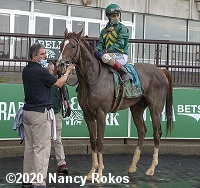 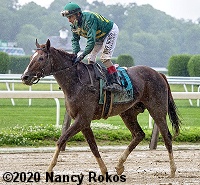 Left: Code of Honor in the winner's circle. Winning trainer Shug McGaughey said,  "I think he beat a pretty good horse in Endorsed. They were pretty far in front of the rest of them. Coming off that long layoff, I was very pleased. I figured he'd like the track. Sometimes when it's like that and its open, anything can win, but I think the two best horses ran one-two. We'll have to see how he comes out of it. I don't want to do too much with him; Running back in the Metropolitan is an option; I'm not ruling it out."

Right: Code of Honor returns after the race. Winning jockey John Velazquez said, "He showed up big today. I had to go around those two horses around the three-eighth pole and the other horse [Endorsed] had a really good lead. I didn't want to ask too much of my horse, but he did what he needed to win today. I just wanted to hand ride him and he was good enough to get there. He's stronger. He looks a lot stronger. He grew up and so hopefully we can have a good year." 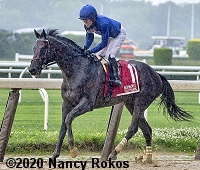 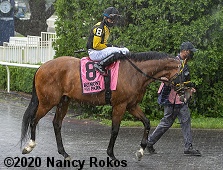 Right: Third place finisher Forewarned heads out of the paddock before the race. He improved his record to 7 wins, 4 seconds, and 3 thirds in 26 starts, earning $424,613 for owner-trainer Uriah St. Lewis. 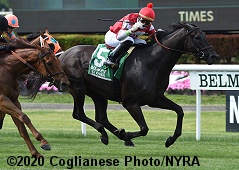 Kicking off the stakes quartet was the $150,000 Fort Marcy Stakes (G2) for older horses going 1 1/8 miles on the inner turf course. Mervin Muniz Memorial (G2) 6th place finisher Instilled Regard was sent off as the 2-1 favorite in the field of 9 over 9-2 Synchrony, 6th in the Muniz, and 5-1 Social Paranoia, 3rd in the Sunshine Forever.

Jockey Eric Cancel sent 11-1 Somelikeithotbrown to the lead first time by and he set fractions of 22.89, 46.96, and 1:11.30 over the good going while pressed by 18-1 Tribhuvan and stalked by Social Paranoia. Entering the lane, jockey Irad Ortiz, 5th early under Instilled Regard, came out 3 wide for room and swept to the lead through 1 mile in 1:35.09. 19-2 Devamani put in a strong late rally from last but Instilled Regard held him off to win by a neck in 1:47.07. It was another length back to Somelikeithotbrown third. 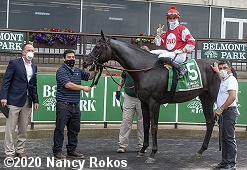 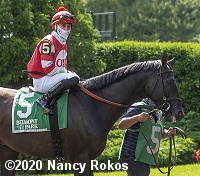 Left: Instilled Regard in the winner's circle. Winning trainer Chad Brown said, "I was a little concerned today. He likes the ground firm and there was a lot of moisture. I'm very proud of this horse that he actually handled some moisture in the ground on the Belmont course. It was a relief to see that. I know he's better on firm turf, but he showed a lot of guts today. The turf is not that soft, but there definitely is some give in it."

Right: Instilled Regard heads out of the paddock before the race. Winning jockey Irad Ortiz Jr. said,  "I broke well and was in a good position from the beginning. I was in a perfect spot on the backside just waiting and then I saw a horse on the outside move. I moved a little early, but I had no choice because I didn't want to be behind horses. So I moved him out and he just took off and started moving really good. When I asked him turning for home, he responded really well. He's a nice horse. I've been riding him four times now and since the first day, we connected great. He has a huge stride. He's the kind of horse that needs the mile-and-an-eighth. He's doing so well right now. He comes back to me whenever I need him and when I ask him, he's there for me." 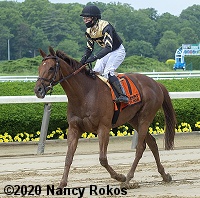 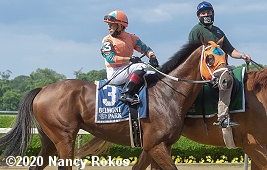 Left: Second place finisher Devamani returns after the race. Trainer Chad Brown said, "It was another good race from Devamani in his second start for us. He had everything against him pace wise and he still almost got there. He's an improving horse that we like quite a bit. He's on his way up."