The Belmont Stakes Racing Festival runs from Thursday to Saturday, highlighted by the 147th Belmont Stakes run on Saturday with American Pharoah attemping to become the 12th Triple Crown winner. Note that Belmont Stakes Day is sold out to NYRA's mandated capacity of 90,000, and there will be no further ticket sales nor walk-up admission. If you do not have a ticket do not attempt to enter the track grounds unless you want to take a chance with a scalper on the street! Friday was mostly cloudy, with occasional drizzle falling in the morning and temperatures around 70 in the afternoon. 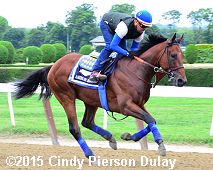 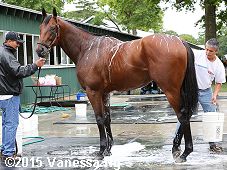 American Pharoah galloped 1 1/2 miles under exercise rider Jorge Alvarez. Trainer Bob Baffert said, "Today's morning gallop was the last hurdle. It was a strong gallop and he floated over the track. He looks the same as he did out on the track before the Derby and the Preakness. He looked like a monster out there. I am really happy with the way he went. He's still sharp."

Owner Ahmed Zayat added, "This will be his fourth race (including victories in the Rebel and Arkansas Derby) in eight weeks. That usually takes a toll on a horse but he's coming in to the race the best he can be. We're coming in feeling that he has a real shot to win the Triple Crown." 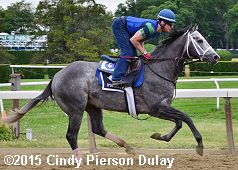 Frosted galloped on Friday and will go out again Saturday morning due to the late Belmont Stakes post time. Trainer Kiaran McLaughlin said, "The thing is we were pointing for races in the spring, both at Keeneland and in New York, and it's nice that the races were going. When you can point for races, and don't have to say, 'let's hurry up and run this one,' you often bat at a higher batting average. We changed everything for the Wood; it was a great achievement for our whole team. It was very satisfying because of how many times we watched the replay of the Fountain of Youth and tried to figure out what went wrong; I'd put it in the top five of my career." 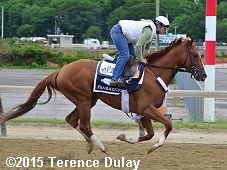 Frammento galloped twice around the training track. Trainer Nick Zito said, "I think the one thing that we're proud of is our Belmont record is good. This horse is a live longshot and I think he'll get a good piece; that's all you can ask for. If anything crazy happens, that's what you think. I'm in the race because I've got a 1 1/2 mile horse. He's got the pedigree, and you can see how cool he is. He has improved a lot, that's why I'm feeling good about everything. You look at the form, and you get scared yourself. You see American Pharoah and you say, 'Who's going to beat this horse?' and there's other nice horses in there, too. They're all good horses. At the end of the day you look at it and say, 'How could you beat those horses?' Again, it's racing. You've got to play the game and anything can happen in a race." 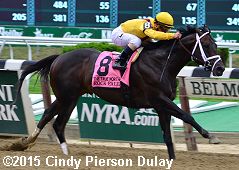 The first graded stakes of the Festival was the $250,000 True North Stakes (G2) for older horses sprinting 6 furlongs on the main track. Rock Fall was sent off as the 6-5 favorite off a 4 race win streak in allowance company. In to challenge him included 7-2 second choice Dads Caps, winner of the Carter (G1), and 5-1 third choice Clearly Now, second in the Diablo Stakes. 10-1 Favorite Tale was quickest away through an opening quarter of 22.35 before Rock Fall took over on the far turn through a half in 45.01. Entering the stretch Rock Fall continued to lead through 5/8 in 56.48. 8-1 Stallwalkin' Dude put in a late rally from 6th but Rock Fall drew off to win by 3 3/4 lengths in 1:08.37. It was a neck back to Dads Caps third. 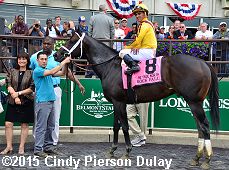 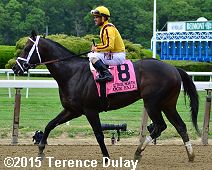 Left: Rock Fall in the winner's circle. Winning trainer Todd Pletcher said, "When he broke his maiden last year I thought he was going to be a good horse, and then he followed it up with a nice allowance win. He had to take a little time off, but to win five in a row now is pretty hard to do, especially sprinting. He's really found his groove."

Right: Rock Fall returns after the race. Jockey Javier Castellano said, "He's just a push-button horse, an amazing horse, a classy horse. He accelerates when you ask, and he's very straightforward. When you ask him he responds right away. He's the kind of horse we're looking for all the time." 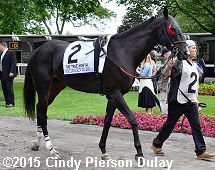 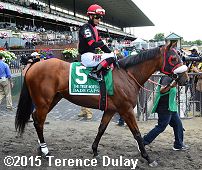 Left: Second place finisher Stallwalkin' Dude in the paddock before the race. The 8-1 shot raced 7th about 4 lengths off the pace under Angel Cruz, then rallied to get third beaten 3 3/4 lengths. He improved his record to 11 wins, 2 seconds, and 3 thirds in 28 starts, earning $420,352 for owner-trainer David Jacobson.

Right: Third place finisher Dads Caps heads out to the track before the race. The 7-2 second choice raced 5th 2 1/2 lengths off the pace under Jose Ortiz then passed tired horses to get third beaten 4 lengths. The Rudy Rodriguez trainee improved his record to 5 wins, 7 seconds and 3 thirds in 19 starts, earning $1,008,650 for owner-breeder Vince Scuderi. 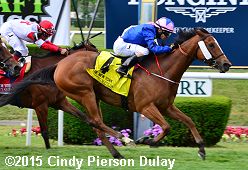 The $300,000 New York Stakes (G2) featured a field of 9 older fillies and mares (8 betting interests) going 1 1/4 miles on the inner turf. The entry of Hillsborough (G3) winner Stephanie's Kitten and Jersey Lilly winner Kitten's Queen was sent off as the 2-5 favorite. In to challenge them included last year's winner at 7-1 Riposte off her 4th place finish in the Sheepshead Bay (G2), and 8-1 Beauty Parlor, winner of the Orchid (G3). Jockey Eric Cancel sent Kitten's Queen to the front through fractions of 24.48, 49.75, 1:14.43, and 1:37.76 while stalked by 68-1 Selenite. At the top of the lane Kitten's Queen continued to lead but 23-1 Waltzing Matilda, 6th early, came out wide for room and outfinished 14-1 Eastern Belle by 3/4 lengths for the win in 2:01.30 over the firm course. It was a nose back to Kitten's Queen third, and a neck more to Stephanie's Kitten fourth. 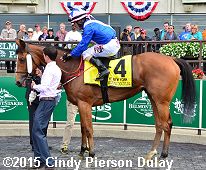 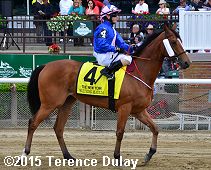 Left: Waltzing Matilda in the winner's circle. James Stack, assistant to winning trainer and father Tommy said, "The plan was for her to be sold in Keeneland in November or Fasig-Tipton, and she was going to run here. We might leave her here and give her another shot; we also might bring her home. She did it well and Junior gave her a great ride. I didn't know anything about him until I got here, but he's a good rider. The faster they went for us, the better. They didn't go that fast and she got a good break there off the lane. She's always gone well and Junior seemed to put her wherever he wanted her in the race and it worked out good."

Right: Waltzing Matilda in the post parade. Winning jockey Junior Alvarado said, "She broke good and was nice and relaxed in a very good position. As soon as I hit the three-eighths pole, I knew I had a ton of horse and started working my way through. Every time I asked her, she was there to help me. We turned for home, I put her in the clear, and that was it. She gave me all she has and we got it done." 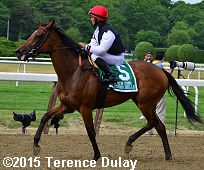 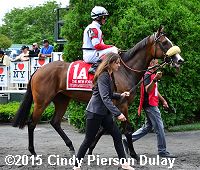 Left: Second place finisher Eastern Belle returns after the race. The 14-1 shot was last for 1 mile under Jose Lezcano then rallied 7 wide and just missed. The Graham Motion trainee improved her record to 1 win, 5 seconds, and 2 thirds in 9 starts, earning $149,831 for owner Antoinette Oppenheimer.

Right: Fourth place finisher and beaten favorite Stephanie's Kitten heads out of the paddock before the race. Trainer Chad Brown said, "I don't know what the rider on Kitten's Queen was doing and unfortunately our filly was seven-wide the whole way. Why, I have no idea." 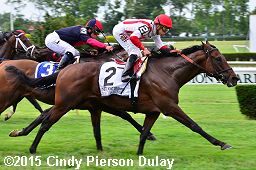 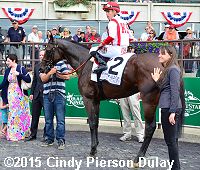 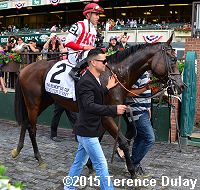 Left: Innovation Economy in the winner's circle. Winning trainer Chad Brown said, "This horse has been so consistent. He's lightly raced, but has a tremendous amount of stamina for a horse that hasn't run much. It's been a little bit of a frustrating day for us, but the ride that Irad gave him was perfect. The only instructions I gave him were 'show them you're the best turf rider in the game,' and I think he did. He missed the break a little bit, but he didn't panic and saved ground. It's our job to put the right horses underneath him, and I think we did."

Right: Innovation Economy walks down Victory Lane. Normally this race would not use Victory Lane as it is reserved for Grade 1 races, but the TV guy were practicing for Saturday. Winning jockey Irad Ortiz Jr. said, "I didn't want to be that far back but that's the game. When they broke he missed the start so I dropped in and saved ground and saved my horse for the end, and he was there. I believe a lot in [trainer] Chad Brown, all his horses finish good. I waited and I was patient and when I asked him, he took off. It was a very nice day, very special." 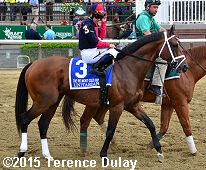 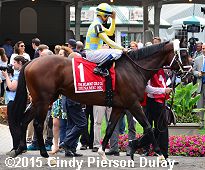 Left: Second place finisher and beaten favorite Unitarian in the post parade. "He ran good, I had no excuse. The other horse he came from behind and was off the pace, too. We just got beat today. I saved all the ground in good position. When I moved turning for home I thought I was home free and the winner was much the best today."

Right: Third place finisher Dynamic Sky in the paddock before the race. The 7-1 shot raced 9th under Cornelio Velasquez then rallied to get third beaten 2 lengths. The Mark Casse trainee improved his record to 5 wins, 5 seconds, and 6 thirds in 26 starts, earning $1,053,047 for owner John Oxley. 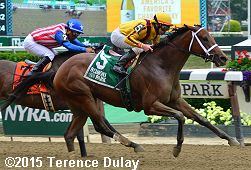 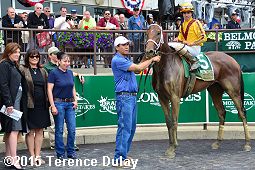 Winning owner Barbara Banke said, "She was great at two and I think we may have tried lengthen her out a little too soon. She didn't really care for Florida but she loves New York. So, she'll be racing here probably for the rest of the year. There are some really nice Grade 1s at Saratoga. She's back and I'm excited." Jockey Irad Ortiz Jr. added, "My filly was ready today. She broke real fast and I got my position, and then I sat and followed (Enchanting Lady) and (Enchantress) and in the stretch I switched to the clear.  When I asked her, she just took off, and I had plenty of horse." 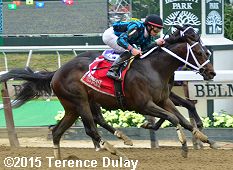 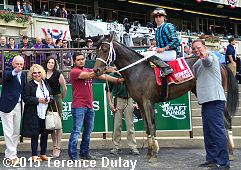 Winning trainer Larry Rivelli said, "We did a little gate work with him. I told Irad to sit behind horses and he rode him great. I couldn't have been happier. He broke so sharp today and was in front, and the Irad rode a great race because nine times out of ten they probably would have wanted to keep him on the lead. Going 5 1/2 the rider would normally think he'd want to hold his position. But he buried him back there and then made his move."