The $250,000 Ballerina Stakes (G1) features older fillies and mares sprinting 7 furlongs on the main track. Sassy Image was sent off as the 7-5 favorite in the field of 6, off consecutive wins in the Winning Colors (G3) at Churchill Downs and the Princess Rooney Handicap (G1) at Calder. In to challenge her included 5-2 second choice Hilda's Passion, 6th in the Bed o'Roses Handicap (G1) after winning the Vagrancy Handicap (G2), and 7-2 third choice Tar Heel Mom, winner of the Honorable Miss Handicap (G2) last out.

At the start, Sassy Image leapt and was last out of the gate, giving up 5 lengths as Hilda's Passion went to the lead to set the pace of 22.83 and 45.43 while stalked by Tar Heel Mom down the backstretch. On the far turn, Hilda's Passion began to extend her lead, opening up a 5 length advantage in mid-stretch through 3/4 in 1:10.19. Kept to task, she finished 9 1/4 lengths in front in 1:22.06 over the fast track. It was just a neck back to 5-1 Tamarind Hall third, while favorite Sassy Image checked in last. 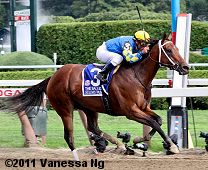 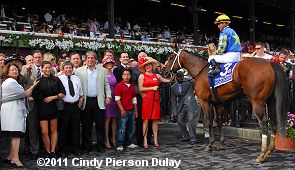 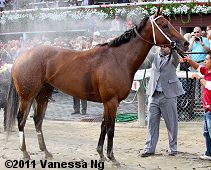 Left: Hilda's Passion in the winner's circle. Her trainer Todd Pletcher said, "We wanted to be on the lead, she broke great, and when she's on her game, she's awfully, awfully good. I didn't see (Tar Heel Mom) start, I heard she stumbled from (announcer Tom) Durkin's description. We were wanting to be where we were, we were happy, and it looked like she was doing it the right way." Unfortunately she suffered a non-displaced condylar fracture in the right front leg, revealed on Sunday. Pletcher added, "She'll go to Rood and Riddle Clinic for surgery tomorrow. It's pretty minor, one clean line, and she could return to race again. It's one of those decisions we'll have to wait and make after the surgery. As far as I know the owners were considering bringing her back to race again next year."

Right: Hilda's Passion gets hosed off after the race. Her jockey Javier Castellano said, "I don't know what happened with her the last time (6th in the Bed o'Roses). I'm glad it's over and we have turned the page. Today, it was a great day. I am very satisfied with the way she did it today. It's hard to predict what can happen in a race. She's a pace maker. She broke so sharp, settled well and was relaxed. She's a very fast horse. I knew she was going to give me a good performance. When I was going to ask her, I knew she would give it to me." 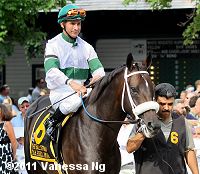 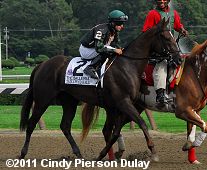 Left: Second place finisher Tar Heel Mom in the paddock before the race. The 7-2 third choice pressed the pace in 2nd under jockey Alex Solis, but could not keep up with the winner, finishing 2nd beaten 9 1/4 lengths. The Stanley Hough trainee improved her record to 11 wins, 8 seconds, and 5 thirds in 29 starts, earning $828,392 for owner Alex Rankin.

Right: Third place finisher Tamarind Hall in the post parade. The 5-1 fourth choice stalked the pace in third under jockey David Cohen, but could not improve position late, finishing a neck back of 2nd. The Jeremiah Englehart trainee improved her record to 7 wins, 1 second, and 3 thirds in 19 starts, earning $223,204 for owner Eklektikos Stable. 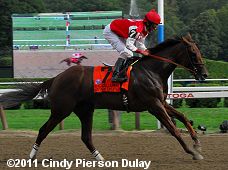 Beaten favorite and sixth place finisher Sassy Image crosses the finish line. Her trainer Dale Romans said, "She just wanted to run to the outside fence, all the way around. She's never done anything like that before. Hopefully she's OK." Jockey Robby Albarado added, "I don't know what happened, she just wanted to bolt. She was just unmanageable. She would have run to the outside fence if I'd have let her. She felt sound under me and she's never shown anything like that." 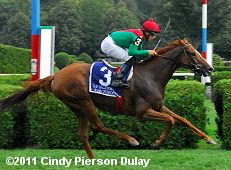 The first stakes race on Travers day was the $200,000 Ballston Spa Stakes (G2) for older fillies and mares going 1 1/16 miles on the Mellon turf course. Aviate was sent off as the 5-2 favorite in the field of 8, off a fifth place finish in the Diana (G1) after finishing 6th in the Just a Game (G1). In to challenge her included 11-4 second choice Romacaca, winner of the Matchmaker (G3) at Monmouth Park, and 4-1 third choice Mekong Melody, fourth in the Diana (G1) last out.

8-1 Tapitsfly was sent to the early lead by jockey Robby Albarado and she set fractions of 23.52, 47.19, and 1:10.67 while 1 1/2 lengths in front of 21-1 Trix in the City stalking her in second. Entering the stretch, Tapitsfly continued to lead but 9-2 fourth choice Daveron, fourth early, came out 4 wide into the lane to pass the pacesetter at the 1/16 pole, drawing off to win by 1 3/4 lengths in 1:40.09 over the firm course. It was another 1/2 length back to Romacaca third, while favorite Aviate was 5th.
Results chart 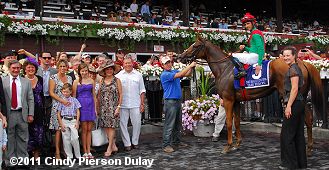 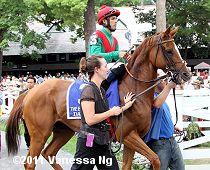 Left: Daveron in the winner's circle. Her trainer Graham Motion said, "When things go right for her, she's pretty impressive. I don't think she could have won any easier today. Eddie has done a great job with her. He's really got her number and that's been a huge part of her putting this streak together. I was actually glad that there was some speed in here; that's a big factor for her. She's bred to go further. She's just very highly strung. That's why we space her races out. Barry (Irwin) is so good and so patient with that, which makes it a lot easier for me."

Right: Daveron in the paddock before the race. Her jockey Eddie Castro said, "She broke good and I put her right behind the speed. She was really comfortable today. She's a tough filly, too, even though she is small. She came to run today. I was covered up down the backside, and as we entered the stretch, I took her out and she ran on well. I didn't know at the time that they were going quick in front of me, but I knew I had the horse to run them down once we got into the stretch." 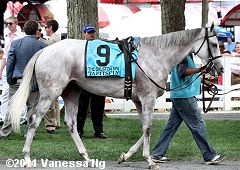 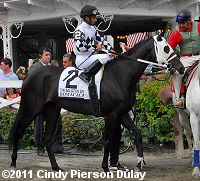 Left: Second place finisher Tapitsfly returns after the race. The 8-1 fifth choice set the pace under jockey Robby Albarado, but could not hold off the winner, finishing second beaten 1 3/4 lengths. The Dale Romans trainee improved her record to 4 wins, 5 seconds, and 2 thirds in 14 starts, earning $475,390 for owner-breeder Frank Jones Jr.

Right: Third place finisher Romacaca heads out to the track before the race. The 11-4 second choice stalked the pace in third under jockey Paco Lopez, but could not improve late, holding third beaten 2 1/4 lengths. The Nick Canani trainee improved her record to 12 winds, 4 seconds, and 3 thirds in 24 starts, earning $618,092 for owner Frank Calabrese. 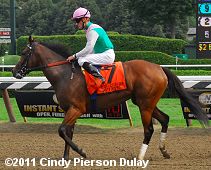 Beaten favorite and 5th place finisher Aviate returns after the race. The 5-2 favorite raced in midpack 6th under jockey Julien Leparoux, was bumped at the 7/16 pole and failed to rally, finishing 5th beaten 4 1/2 lengths. The Bill Mott trainee has a record of 4 wins, 0 seconds, and 1 third in 12 starts, earning $260,534 for owner-breeder Juddmonte Farms. 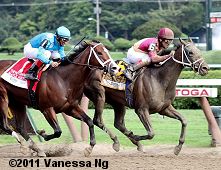 A field of 9 three-year-old fillies contested the $102,000 Victory Ride Stakes (G3), a 6 furlong sprint over the main track. Jealous Girl was sent off as the 5-2 favorite in the field of 9, winner of 4 straight including the Femme Fatale Stakes at Penn National last out. Funny Sunny was the 3-1 second choice off a close second in the Lucy Scribner Stakes, over 9-2 third choice Roman Treasure, third in the Test Stakes (G1) last out.

Jockey John Velazquez sent 8-1 Maple Forest to the lead immediately and she set quick fractions of 21.77 and 44.23 while pressed by Jealous Girl and Roman Treasure. At the 1/4 pole Maple Forest began to pull away, opening up a 2 length advantage midstretch through 5/8 in 56.66. 7-1 Hot Summer, 8th early, closed late through the inside to catch Maple Forest late, winning by 1/2 a length in 1:10.18 over the fast track. It was another 3/4 length back to Roman Treasure third, while favorite Jealous Girl was 6th.
Results chart 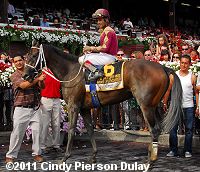 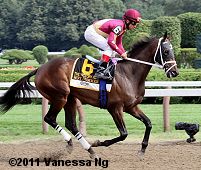 Left: Hot Summer in the winner's circle. Her trainer David Fawkes said, "When (Tom) Durkin called her at the head of the lane, we felt good. It's the first time I've been in the winner's circle here. Every time I've won, I'd be home at Calder. I wouldn't mind seeing her go 7/8. She ran awfully big today. It's possible we would train her up to the Breeders' Cup."

Right: Hot Summer in the post parade. Her jockey Cornelio Velasquez said, "I liked my filly. I told my agent she was a good fit in the race. She comes from behind and has a strong finish. I wanted to be on the inside or in the middle. I had a lot of horse." 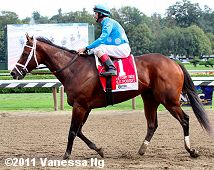 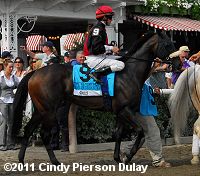 Left: Second place finisher Maple Forest returns after the race. The 8-1 shot set the pace under jockey John Velazquez but could not contain the winner, finishing second beaten 1/2 a length. The Todd Pletcher trainee improved her record to 3 wins, 4 seconds, and 0 thirds in 9 starts, earning $172,556 for owner-breeder Blue Heaven Farm.

Right: Third place finisher Roman Treasure heads out on the track before the race. The 9-2 third choice stalked the pace in second under jockey Ramon Dominguez, and finished well to hold third beaten 1 1/4 lengths. The Mike Hushion trainee improved her record to 3 wins, 0 seconds, and 2 thirds in 8 starts, earning $148,000 for owner Black Swan Stable.

Also on the card: Travers and King's Bishop Stakes
On Friday: Bernard Baruch
Sunday's card was cancelled due to bad weather from hurricane Irene.